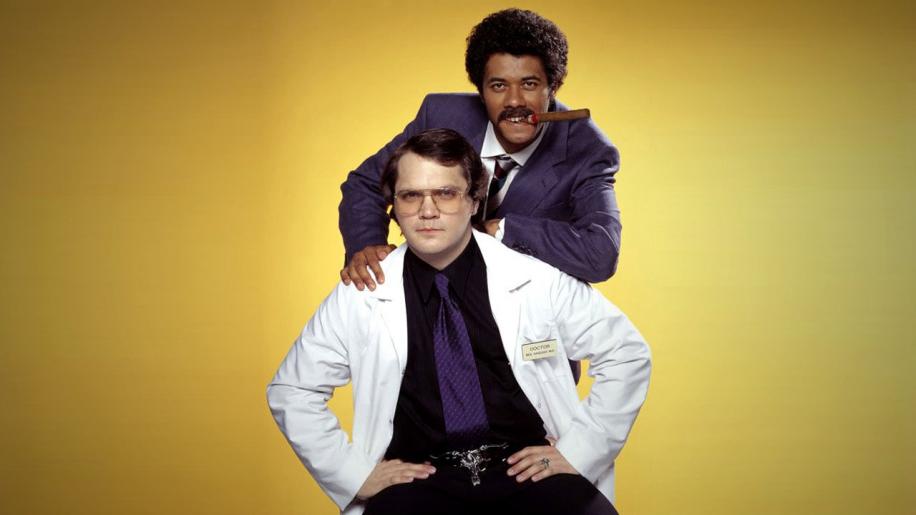 The episodes of Garth Marenghi's Darkplace come presented with very dated-looking 1.33:1 aspect ratio non-anamorphically enhanced fullscreen transfers, but making them look so dated is definitely intentional and totally in-line with the humour of this production. By dated, I mean there is constant softness, terrible detail, some light grain and a colour palette that looks extremely faded. Viewers who only catch a glimpse of this show would be forgiven for assuming that it was indeed filmed several decades ago. To accompany the show we get a fairly standard Dolby Digital 2.0 track, which is perfectly acceptable for a TV series. The clichéd dialogue comes clearly and coherently through the frontal array, with the dated score also sounding perfect for this mock-horror show. Effects are quite wide-ranging, but get limited treatment, and even though it is nothing to write home about the track is perfectly suited to the material. First up we get mock Commentaries by Garth, Dean and Todd, who talk in-character, across every single episode from this series. There is a lot of criticism between the group, with comments about how ugly some of the cast are, how some of the shots are quite poor and the dating of the show (arguing over whether or not it still looks good). Todd gets quite a lot of time to rip into the presentation of this show and how cheap and shoddy it looks, making the Commentary even more hilarious.

My Storyboards are storyboards drawn terribly on a napkin and compared sometimes to the relevant scenes. There are four in total and they are pretty funny, particularly the comparison death sequence from the first episode. The descriptive segment reads “Marenghi meticulously planned each spectacular sequence of the shot on the back of his breakfast napkin. These storyboards are a testament to the Splattermeister's visual artistry. What follows is a selection of the cleanest.”

“In Memorium Darkplace” is a Photo Gallery with several dozen shots of the cast and crew in ridiculous mock-poses. It is worth flicking through.

“Darkplace Illuminatum” is a selection of the 'least angry' of the mock-interviews from Marenghi, Learner and Rivers. Totalling some thirty minutes, we get the horror master discussing his lack of scripts, stating his work is like an addendum to The Bible, talking about the characters, arguing with the others about how tall he is, discussing the use of guns in real hospitals, and commanding the cast as director. It's not as funny in such a large dose, but still much more amusing than your usual DVD interviews.

“Misc. Horrificata Illuminata” is a selection of further interviews which were cut because of the 'propensity to rant'. Also lasting thirty minutes, it sees the same three interviewees talking about The Bible and Shakespeare's work as horror productions, looking at Garth's methodology and just generally rambling. The discussion on punctuation is hilarious, and also on how they made the book look bigger by either 'adding more words or getting thicker paper'.

“One Track Lover” is a mock-single sung by Todd Rivers, with Darkplace excerpts in it. Terribly, amusing mock-eighties stuff. The option also allows you to sample the Darkplace theme and selected Darkplace 'moodscapes' from Side B.

“This One Scene I Cut” comes from the Scotch Mist episode, lasting under two minutes and featuring Garth having a nightmarish recollection.

“Pam's Home Movies” are mock-home videos recorded by Garth's wife Pam, taken from the set of the Darkplace production. Totalling some four minutes, and sometimes without sound, they are quite funny to look at.

The Test Footage is mock footage from an original test run of Darkplace episodes which had to be re-shot because Dean Learner did not like his hair. Lasting only a couple of minutes it is not actually that funny, in comparison to the rest of the stuff.

There are five Radio Ads, done by the main cast, and they are all quite funny. Although perhaps not to everybody's tastes, Garth Marenghi's Darkplace is worth watching with an open mind and if it does tickle your fancy then I'm sure you'll love this DVD release, with a bevy of extras that all have the same self-mocking flavour.