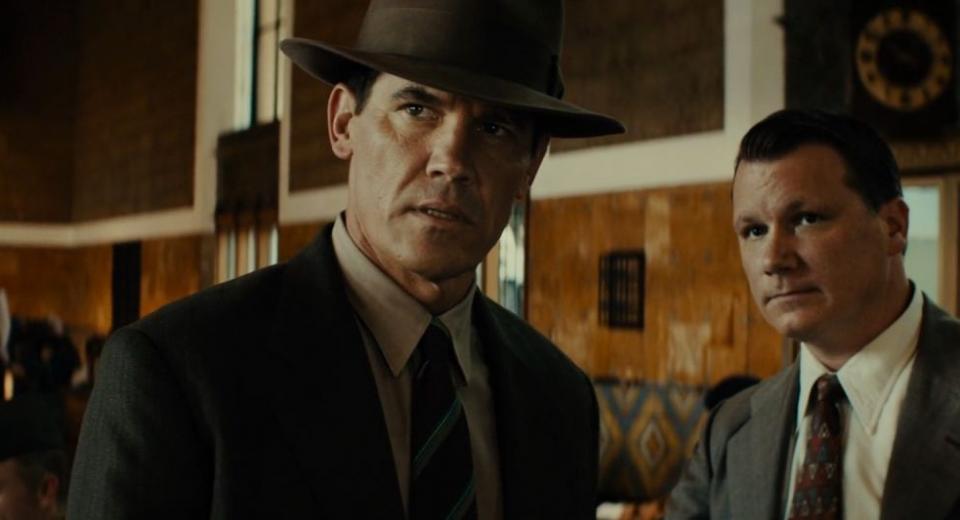 Certainly the video doesn’t open itself up to criticism, the UK Region Free Blu-ray boasting the same spectacular 1080p/AVC video presentation that our friends across the pond received earlier, rendering the movie in its original theatrical aspect ratio of 2.4:1 widescreen. Detail is excellent throughout, despite the rampant heavy stylisation of the piece – and perhaps even to the detriment of Sean Penn’s occasionally dodgy prosthetics. The opening boxing sequence looks stunning though, one of those moments where his facial look actually works, observant of skin texture, lines, wrinkles, pores, and beads of sweat. This, in spite of the fact that the sepia levels have gone into overdrive. There are, of course, a few softer moments, although one would probably be better off assuming these are largely intentional in order to assist with the semi-steam-punk period style. The colour scheme is broad and vivid, in spite of the aforementioned stylistic over-saturation choices, and the tones are well rendered throughout, with strong black levels that only briefly skirt the edge of crush. All other digital defects – edge enhancement, excessive DNR application, banding, blocking – are simply non-existent. Overall it’s certainly demo material, but a couple of minor niggles do keep it from achieving top marks.

Similarly the DTS-HD Master Audio 5.1 track is hard to fault, an impressive and penetrating accompaniment which offers both power and precision. Dialogue comes across clearly and coherently throughout but, if the soundtrack were anything to judge by, it feels like the least important element, with boisterous gun-driven effects and a thumping score to keep the momentum going. Indeed the only thing stopping this track from getting a perfect 10 is the LFE channel which, for once, feels over-used. It doesn’t sizably impact the proceedings – most people will probably revel in every thunderous shotgun blast and ever bass strum on the score – but it does seem to be slightly unbalanced in comparison with the rest of the track. Still, dynamics are excellent, with superior sound design allowing the powerful blasts to ring out across your living room, and enabling the gravelling car engines to drive right over you. Certainly this is the most lively, engaging period gangster track I’ve ever come across, and it’s easily demo quality.

Matching up identically to the US package we get a comprehensive array of extra features that ticks all the boxes and covers all the bases: Commentary, Picture-in-Picture track, Featurettes, Deleted Scenes...what more could you want?

Commentary with Director Ruben Fleischer offers up a full-length accompaniment where Fleischer goes through the motions in detailing the production. Most of the stages are covered: the concept, the script, casting, the shoot, the effects etc. etc. but unfortunately Fleischer himself makes for one of the worst commentators – he’s just so dull. You’d have to be a truly dedicated fan of the feature to listen to this, especially when you could just watch the PiP track instead and gain most of the same background information, in a far more palatable fashion.

The Gangland Files is a comprehensive PiP track that offers up all the behind the scenes material you could want in relation to this film, flipping through interview snippets with cast and crew members; archival photos; production footage and final film clips, as well as a series of optional Focus Point Featurettes that can be watched here or separately below. Easily the best extra on the disc.

Tough Guys with Style is a brief 4-minute addition which has the cast and crew chatting about the people that lived within this era.

Then and Now Locations spends 8 minutes reflecting upon 40s Los Angeles, looking at the changes over the years with the helpful use of dozens of comparison shots.

Rogues Gallery: Mickey Cohen is a 47-minute Documentary on the famous gangster; another decent chapter in the Rogues Gallery series, with William Devane narrating an interesting biographical profile on the real gangster Mickey Cohen.

Deleted scenes provide you with 12 minutes of extra material split into some 7 scenes. Here we get a little more time devoted to both of the minority team members and their respective cultures; adding a couple of extra examples of Cohen’s intimidating behaviour; and further lending credibility to the illicit romance sub-plot in two brief scenes. Although there’s nothing must-see about this selection, I can see how adding some of the footage back in might have better addressed some of the flaws in the film.

This is not quite the squad you were looking for.

Brimming with potential, and boasting a cast to die for, unfortunately Gangster Squad – following controversy, delays and reshoots – ends up being a slightly disappointing period actioners. Perhaps lowering your expectations will help, but the cast alone (Gosling, Penn, Brolin, Nolte) should have guaranteed a more memorable movie. Predictable plotting, clichéd dialogue and inconsistent characterisations do it a fair amount of damage, but it’s the indecision over whether or not it’s a flashy, style-over-substance 300-with-gangsters or a serious successor to the likes of The Untouchables (either way it could have worked) that leaves Gangster Squad feeling so ineffectual. Still, it’s hard to deny the fact that it’s pretty entertaining fun for the duration, and I suspect that those who shut their brains off – and try not to figure out who is doing what and why; and where we might have seen it before, and better – will have a Tommy gun blast whilst watching this.

On Region Free UK Blu-ray we get excellent video and audio presentations as well as a whole host of extras that ticks all the right boxes – certainly fans should regard this as a worthy package. Those who are interested in it but didn’t get around to seeing it at the cinemas should maybe consider a rental first to see if it’s a keeper. Perhaps the cast alone will dictate you own this film, but The Untouchables it is not. Still, worth a look.