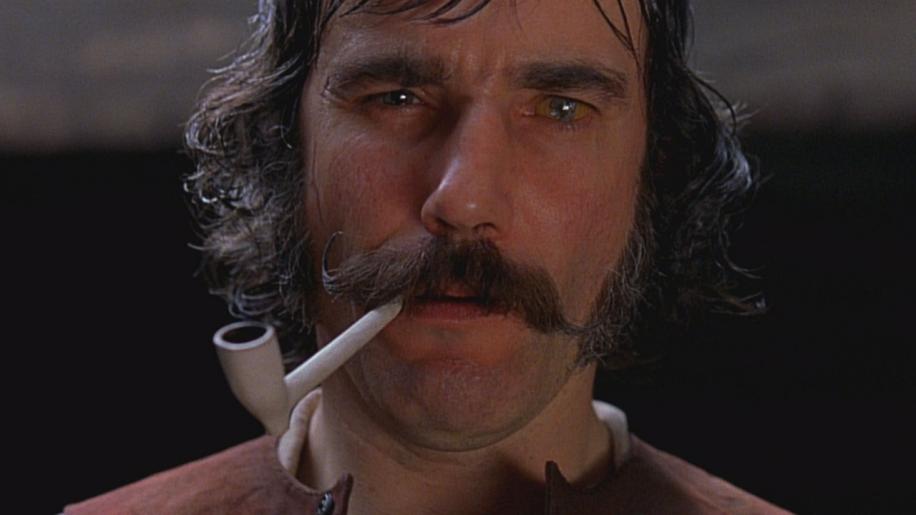 Let me start with a confession. To first see this film, I bunked off work during the day, sloped off to my local multiplex not realising the near three hour run time. What made matters worse is that it never felt like it was that long and I came back to the office whereupon I was greeted with raised eyebrows for such a long lunch. “Queues” said I. In truth I had witness what I generally perceived to be the best film of 2002 and one which I have come back to many times over the intervening years; I've lost none of my passion for it and even though I don't have much stock or faith in award ceremonies, it is still think it's a travesty that it was so cruelly ignored.

I've long been an admirer of Martin Scorsese, indeed his early body of work has produced some of the most engaging and entertaining cinema of all time. Working in collaborations and honing his art, every film he is involved in seems personal, as if drawn with experience. It is his attentions to detail as well as his artistic bent that bathe his frames in picturesque beauty; many times has he taken inspiration direct from the canvas and projected it on the screen. Having already explored the streets in modern times and sophisticated gangs in his 'mafia films' the time was right for him to delve into history and scrutinise how his home town of New York became the thriving metropolises it is today and how even during those times the street life, the gang warfare and the religious temperament that so influenced his career were still to be found. In truth this was a film he had wanted to make since the seventies and the devotion to deliver is right up there on screen, from the layered script, to the performances, to the very look of the film. Generally regarded as a small gun in the Scorsese arsenal, it nevertheless encompasses all his ideals, remains highly personable and is a thumping good film to boot.

The film opens up in true militaristic fashion with two warring factions preparing for battle; though there may be two 'armies' there is no discipline; this is a gang war, an ugly war, a war to the death; a pivotal moment deciding the fate of all involved. William "Bill the Butcher" Cutting (Daniel Day-Lewis) leader of the “Nativist" faction is going head to head with the "Dead Rabbits” comprising of the immigrant Irish headed up by Priest Vallon (Liam Neeson). The fight is being overseen by Vallon's son Amsterdam and when things go badly the wheels are set in motion that will inevitably end in a confrontation between these two characters. Scorsese neatly set up the tone, plot ideas and characters for this film here in the first few minutes. It is a brutal and in your face battle fought, literally, tooth and claw. Bill stands proud and defiant, a charismatic leader, building his reputation on fear with more than a personal vendetta with Vallon (as we find out later in the film) and their clash is one of epic proportions. As Amsterdam is whisked away we just know he's going to be back for revenge.

Scorsese neatly sets up the main protagonists, the tone and the overall feel for the film in these few minutes; the underlying current of racism, the religious bigotry, the sheer brutality of it all. And yet, within this awful melee, with all its undercurrents there is still a healthy dose of respect, between comrades at arms and opposing factions, especially Bill and Vallon. And that respect is what is tested through the film, respect between friends, lovers, enemies and even classes; for once that respect is gone then all hell breaks loose and no one is safe.

Day-Lewis' character of Bill the Butcher having been introduced goes on to be one of the most charismatic influences of the film; he is larger than life, a brutal and cruel leader but with that ego is the heart of a lion, no matter how ill placed his rage, he remains a dominant figure. This is both a blessing and a curse for the film; his portrayal is quite magnificent, commanding the screen and every scene he is in, and he does it so effortlessly. His passionate speech to Amsterdam, draped in an American flag remains one of the best cinematic speeches of all time. The audience both loves and loathes him, it is a fine line to tread and Day-Lewis manages it with aplomb. However, such is his performance that everyone else pails, especially his nemesis in Leonardo DiCaprio. Now, little Leo, at the time was starting to make a name for himself and indeed has gone on to some very great things. And whilst his performance here is still very good, his chemistry with Cameron Diaz being a particular highlight, when he goes toe to toe with Day-Lewis he seems to shrink instead of rise. And I still can't fathom how he can manage to raise an army against the Butcher, he simply doesn't show the 'sand'.

Thankfully the film does more than revolve around these two main characters, Jay Cocks story picks a volatile point in history the backdrop of which is the Draft riots. It is a shrewd idea to pit so many against each other all the way down the line and Scorsese makes full use of the juxtaposition. The intricate and multilayered script tackles struggles between gangs of different statures, those of the street and those within government; both seen as corrupt and decadent, begging the question who is worst. The gangs of the street, robbing and brutalising to survive, or those in 'power' utilising the street gangs for their own means, or the Government itself whose overall lack of respect towards its citizens brings about the horrific bloodshed. Within this there is the power struggle between the various gangs and the emerging Amsterdam and his quest for vengeance. The final inter-cutting of the various factions vying together representing street to government is an exercise in cinema supreme.

Cocks' script, though, is not content to rest there, political structure is also examined, Monks (Brendan Gleeson - Day-Lewis' only contender for command of the screen) reluctance and eventual succession showing a weakness for power and a cowardice for change when he is eventually struck down. These elements bring home a crashing statement of the corruption of power.

Further still is Amsterdam's corruption from his vengeance quest, how uncomplicated it is to take the easy path; his money and prestige conspire to veer him away from his 'path' the religious or moralistic tale of temptation written plainly for all to see. He even has his own Judas of sorts. But its never so easy, when given the choice of true happiness with a companion and lover, his 'path' becomes an obsession and it then forever dominates him, to the exclusion of all else, leading to the eventual destruction. In this journey DiCaprio really shines, demonstrating a tortured soul; if one may struggle to believe his rallying skills, at least his human façade is one grounded in reality.

Scorsese once again teams up with long time collaborator Michael Ballhaus to provide the cinematography and he does an exceptional job. Together with production designer Dante Ferretti this trio create a visual feast within the frame. Always a fan of the long uncut sequences, one springs immediately to mind; the tracking shot of the Irish coming off the ship, being enlisted direct to the army, boarding another ship as the coffins of dead soldiers are brought ashore. A moving and all encompassing shot that sums up the tone of the times. There is much authenticity to the film, many of the characters are influenced by real life counterparts (even keeping their names and those of the gangs they fight for the same) and the events that take place are largely inspired by actual happenings; check out the Discovery Channel extra for more on this. Made at a time when CG was well established Scorsese opted for life size sets and this helps to give a real presence to the picture. The dirt and squalor that is so prevalent in the Five Point demonstrates the attention to detail given to the entire production; the love that Scorsese has for this project seeps into everyone and it shows on screen; right up to that final frame of the New York Skyline with its Twin Towers still proudly standing. There is of course a fabled extended cut of the film, since it was held in limbo for over a year by producer Harvey Weinstein and was eventually cut to ensure a release, however, Scorsese's own dislike for 'director's cuts' means that it is unlikely that any such extension will ever surface. Which, ultimately, is a shame, because even at 167 minutes the film still manages to seem cramped; there are so many layers and ideas that a lot never get the full treatment they deserve. Having said that, the ambitious project is one that I adore, the overtly simple story folded into a complex web of story telling. It may not be one of Scorsese's best, but that is like saying one diamond is slightly less sparkly than another.