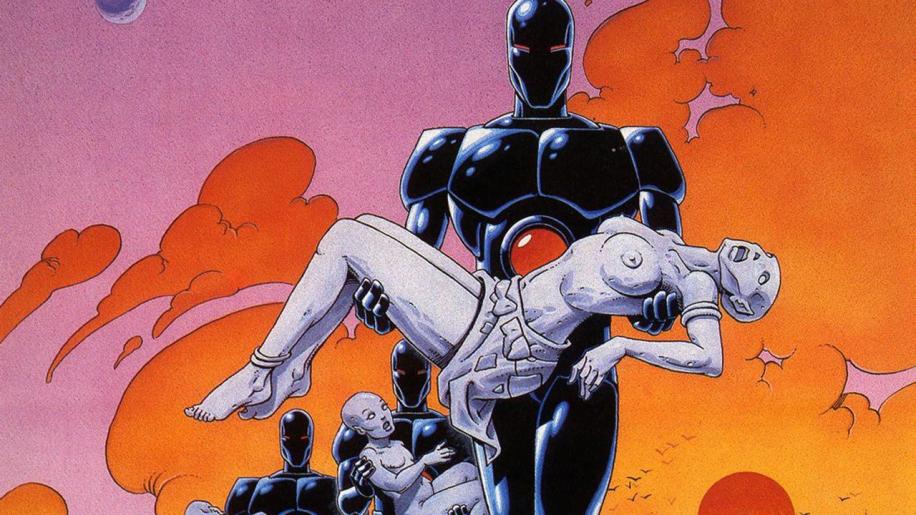 In 1988 Rene Laloux embarked on his last film as director, Gandahar. Now for the first time it has been released on Region 2 DVD in it's original format. Gandahar is a society based on harmony with the environment, it's so perfect in fact that when needing fish for supper they kindly oblige and jump straight into the boat for you. No hard work required here. Their society has been like this for an unknown but certainly elongated period.

It comes as a complete shock to them therefore when suddenly some of the citizens are immobilised into stone by a Medusa ray of some description. It falls upon Sylvain, Syl to his friends, to explore his countryside in the hope of finding the perpetrators of these heinous acts. Once the information has been gathered the High Council of Gandahar hope to find some way to fight this new frightening foe. On Sylvain's travels he is aided and loved by Airelle, a blue skinned topless Gandaharian woman whom he saves and The Deformed ( or Malformed as they prefer to be known ). The Deformed are mutant creatures, the result of wayward genetic experiments from Gandahars scientific community. Perhaps not all is rosy in the new Garden of Eden after all.

In time Sylvain discovers that the menace itself comes in the form of hordes of black, empty metal men. Robots of a sort whose task it is to immobilise the Gandaharians and to transport them over to their own 'base'. On further investigation it appears that a huge brain in the middle of the ocean commands these metal men. The brain, calling itself Métamorphe, acknowledges that it is itself a Gandaharian, the result of other errant genetic manipulation and also that it seems to have some connection to the metal men but it cannot fathom why. Feeling remorse for its apparent involvement in subjugating it's 'fellow' Gandaharian citizens Métamorphe suggests to Sylvain that he reside in suspended animation for 1,000 years to awake then to kill Métamorphe itself.

So begins the prophecy of The Deformed... "In 1,000 years, Gandahar was destroyed and all of its people killed. 1,000 years ago it will be saved and the inevitable avoided."

At first Gandahar seems a little like the offshoots of a bad 1960's trippy animation without the pleasure factor. The animation is stylised never demanding, and has innocence to it not usually found today with complex CGI and Anime. There's a wide range of environments and creatures inhabiting this film and we're certainly under no impression that it's some future Earth but somewhere definitely alien. The story itself continues at a reasonable pace, introducing new characters just when you think the it might be stalling somewhat; it is these new characters that ultimately define what Gandahar is trying to say.

We learn that the idyllic civilisation might have come at a price. We start to wonder if those all seeing birds are the result of nature as it intended or the machinations Gandahars science. What other aspects of this perfect world are created as opposed to naturally developed? Laloux shows us that man must respect his own limits and that of his surroundings. To tinker with it to excess, or without conscience, will only result in brutality and depravation, ultimately coming back to haunt the society which created it.

Overriding this subtext is the main plot of Gandahar, one of invasion through time paradox. Only in the future will the answers to today's problems be solved. This works well, the plot emerging as the film progressing. Never at any one time is too much given away, the viewer always has to engage with the movie, to join in with it and to join the dots from A to B to C. Like most other European films of any genre this requires some thought, the answers are never immediately presented to you on a plate. For that reason Gandahar is certainly worth a watch or two. One I certainly will go back and enjoy and I encourage you to sample its delights also.