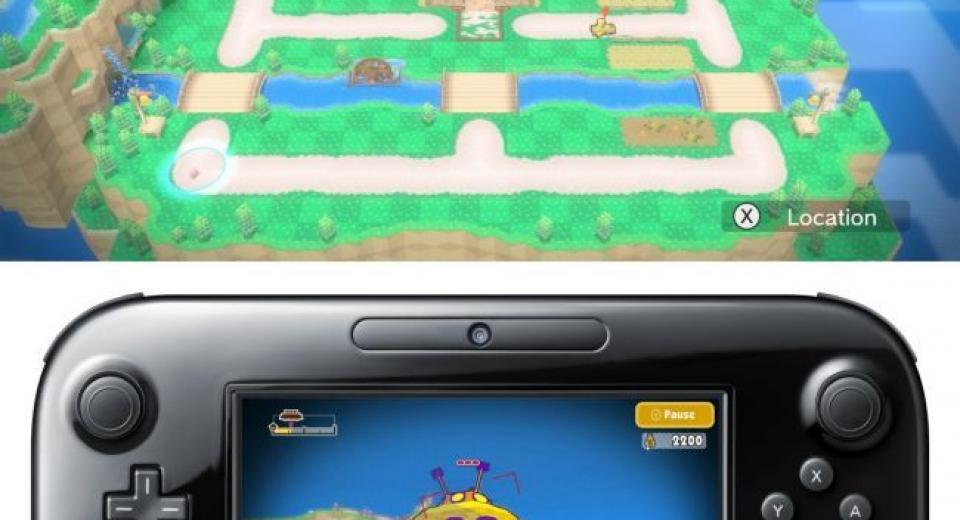 After the initial excitement of new hardware, it’d be fair to say many commentators have been eager to draft the Wii U’s obituary. But quietly, the console has been amassing a reasonable array of first party titles, albeit one that lacks the knockout system-seller punch that a Link or fully 3D Mario outing might provide. If Nintendo Land failed to be the equivalent of the Wii’s Wii Sports, perhaps Game & Wario can channel the DS’ first proper example of dual/touch screen inventiveness and emulate WarioWare: Touched!

For 1~5 players, Game & Wario already trumps Nintendo Land in terms of multiplayer accessibility by making the game playable - in all modes - with just the one solitary GamePad. In a deviation from Touched!, the emphasis is on mini-game rather than micro-game madness; there’s a nice mix-up of pace rather than just furious screen jabbing. There are twelve slices of single player quirkiness to try, ranging from the more pedestrian bowling to a bizarre GBA-playing meta-game.

It’s an eclectic mix which feels far more organic than the multiple tech-demo nature of Nintendo Land. It helps that the overarching cartoon art style employed throughout ties everything together, giving a sense of a genuine continuation of themed content developed by a team rather than a rush to bundle a series of disparate mini-games together. Wario’s maniacal face looming into view - even if only in a few segments - and the injection of humour certainly works to the game’s advantage. If, as reported, Wario was not always part of the design, you can see why he was shoe-horned in.

The mixing of touch screen and motion control is well balanced, but it does require a fairly upright gaming position to get the most out of. If you’re even vaguely a sloucher, you will be fine tilting to navigate Ashley the witch on her broomstick, or scanning the screen as a paparazzi in Camera; however Kung Fu - where you must hold the GamePad flat and use gentle leaning motions to navigate giant leaps from a top down perspective - requires you to crane yourself over a totally flat controller as if you were peering down a plughole for a lost ring.

For each successful challenge passed, you gain a token which can be redeemed at the in-game capsule machine, the Chick-N-Win, a giant mechanical chicken which lays familiar toy capsules. The jovial approach isn’t broken by offering anything as mundane as the standard collectibles as you might’ve found in Shenmue or numerous games since; the range is ridiculous titbits that simply wouldn’t fit into a game but were too good to lose. Taking a snapshot and seeing your visage cartoonishly amended and splashed across a fictional magazine like Moustache Beauty - bearing the tagline “how to have your cake and wear it too” - is genuinely funny. The character and sheer breadth of the oddities help make the little asides a true lucky dip you want to pursue, and there are 240 of the little blighters to collect. The screen to GamePad gameplay switch is pretty nifty, and doesn’t just opt for tying the two together or duplicating the experience from one to t’other. Gamer is a series of vignettes too small to be called mini-games, but thanks to a story involving a boy trying to evade his mother’s glare whilst staying up past his bedtime, it requires you to not only play on the GamePad, but also keep an eye on the TV for when she may loom into view. If she catches you, it’s game over, particularly galling at the moment you best a boss level. It’s that kind of weird meta-layer that sets this title apart from similar family fun collections; half of what it does is with a nod and a wink. Navigating a finger to go up a nostril - for example - is childish, but the fact someone has coded it and put it in a mainstream title makes it seem all the more deliciously absurd.

It isn’t just cheap laughs though, Patchwork offers the challenge of tessellating patterns, and Design tasks you with drawing lines, shapes and angles freehand - easier said than done. If there is one criticism of the single-player side of things, it’s similar to that of Nintendo Land - when it tries to incorporate multiple ideas it becomes muddled and screams novelty rather than fun. The Pirates mini-game has all the humour, but none of the slickness to make its rhythm-based antics more than an oddity; the motion control for scanning the environment is twitchy and somewhat unreliable, but must be endured to get to the dance section. It’s an almost inspired basis for a mish-mash of ideas, but as with any off-the-wall collection of bizarre mini-games, some will work whilst other will fall flat. Luckily Game & Wario is not only balanced predominantly towards the former, but also has enough variety to gloss over the instances of the latter.

Beyond the twelve single-player offerings (of which two are for 1~2 players) there are four multiplayer games to choose from: Fruit, Artwork, Disco and Islands. They rely quite heavily on pre-existing ideas, which is disappointing, but at least they should be accessible as the concepts are easy for gamers of all abilities to relate to. Artwork, for instance, is essentially pictionary (2~5 players) with the added benefit of dual screen play, as the GamePad’s sketches are replicated in real time on the TV.

Disco is an adversarial one-on-one rhythm game, but the lack of multi-touch functionality in the GamePad’s design raises its head, as players share the controller (on a flat surface lengthwise) and set rhythms for each other to tap out. Utilising a stylus alleviates the quite literal hit-and-miss nature of the input, but it seems so distanced from the central humour and uniqueness of the core game as to be underwhelming anyway. Fruit tasks the GamePad wielder to navigate a thief around one of three populated environments and steal fruit. At the end of the time limit the other players (using a loose sense of the word in videogame terms) who’ve been viewing via the TV - and have no indication other than their own powers of observation and a vague location guide every 30 seconds - must attempt to guess who the pilferer is from a line-up. Objects obscure views, lights can be turned out, manholes used to warp and a handy screen loop - whereby you can walk off one side to appear on the other - all combine to aid the would-be-thief. It’s a perfect example of asynchronous multiplayer intended to draw in non-gamers as the majority of those playing require no input beyond guessing.

The final multiplayer offering is arguably the best; Islands is a simple concept that, unlike the other games, requires some strategy. You, and up to four other players, take it in turns to fire a group of “Fronks” onto various targets on floating platforms. It’s not just a question of who can most accurately use the GamePad to catapult them, but the precarious nature of the target areas makes a touch of planning the best route to success. There are only four stages to choose from, but they are varied. Tippy Tower for instance plays out with a Kerplunk vibe - your Fronks teetering and leaving you close to outright forfeiture if the platform capsizes - whilst Salty Scales is a true balancing act in every sense, as you must work out where your Fronks are situated, how many will tip the scales to the right point and what the next player will intend to do.

Game & Wario is, like all mini-game compilations, a hit-and-miss affair. However, unlike the glorified tech demo that was Nintendo Land, it at least offers the sense of being one game split into many pieces rather than disparate bits bolted onto one another. The wacky atmosphere, nods to the past and consistent art style help the array of oddball attractions fit into something resembling a genuine game shaped package.

It’s still a bit of a divided amalgamation though, with the tone offered in the zany single player distinctly different to the family friendly accessibility of the party game oriented multiplayer mode, but that’s as it should be - junior may snigger at the nostril poking antics, but it’s doubtful grandma will.

If there is a central criticism with Game & Wario it’s not that there’s a lack of variety in the mini-games themselves, but that each doesn’t evolve enough for the solitary player to keep coming back, which is a great pity considering the sheer heart the title shows in its charismatic presentation of simple content.