Epic books, epic series; can Telltale complete the GoT set with an epic game? 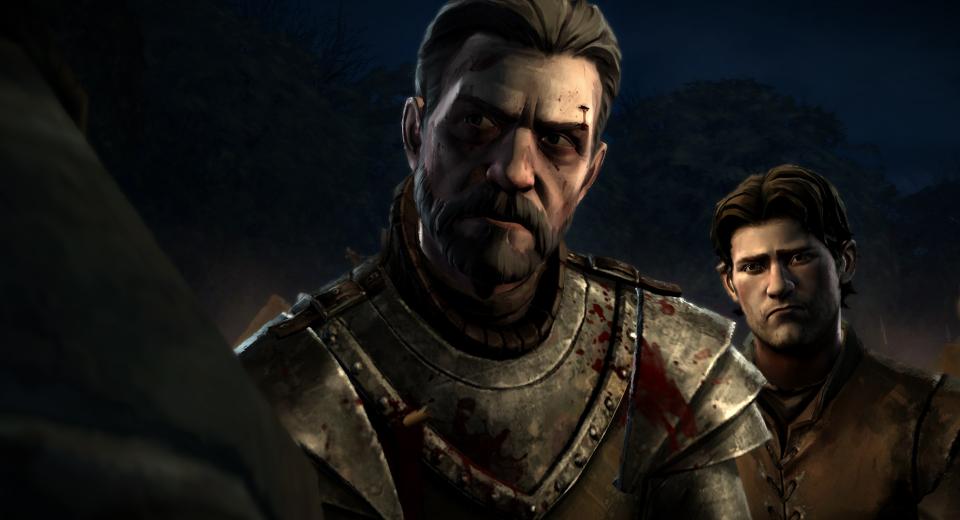 *** This review contains spoilers for the Game of Thrones television series, if that’s something you’re concerned about, I’d advise avoiding reading any further until you’ve finished Season Four. ***

I am obsessed with A Song of Ice and Fire. I’ve read and re-read the books, watched and re-watched the show.

After the announcement that Telltale would be creating a Game of Thrones game I was ecstatic, although somewhat disheartened by their decision to base the game on the show, not the books. I suppose I can be considered a bit of a book purist, because my nerd rage at the show’s version of Bloodraven is unparalleled.

Telltale’s Game of Thrones revolves around one minor Northern family, House Forrester. In the books, House Forrester are sworn to House Glover, who are in turn sworn to House Stark. The game skirts around the Glovers and instead makes Forrester loyalty solely to the Starks. This, I assume, is to make their allegiances more clear, and in the grand scheme of things isn’t much of an issue.

No real knowledge of House Whitehill is provided in the books, and as such it’s given Telltale a blank slate for both houses.

Unfortunately, when it comes to House Forrester, Telltale didn’t push the boat out all too much. The patriarch of the family, Gregor Forrester is a brave an honourable man. His wife, Elissa, is a Southern woman who has accepted the North as her home after much internal struggle.

Their oldest son, Rodrik, was groomed for command from the moment he was born and is the most capable fighter in the Forrester family. The second born son, Asher, was exiled to Essos after an altercation with the Whitehills. Firstborn daughter Mira Forrester follows, now in King’s Landing serving as Margaery Tyrell’s handmaiden. Then, the twins Ethan and Talia, who struggle with the responsibilities thrust upon them at home. Finally, the youngest son, Ryon, of whom nothing is expected. Sound familiar? It should. Gregor is loose fit for Eddard Stark, but the similarities in Elissa and Catelyn Tully are undeniable. They even look alike. Rodrik and Robb Stark share their similarities, as do the black sheep of their families, Asher and Jon Snow. Mira is Sansa Stark’s shadow, a young woman thrust unknowingly into the cutthroat intrigue of 'The Game' in King’s Landing. Ethan is akin to Bran Stark, a young boy forced to lead his house while his elders play at war. Talia, admittedly, holds no similarities to Arya other than her age, and Ryon and Rickon are both small children, with no real personalities due to their young age.


Telltale can be considered to have played it safe

It’s disappointing how close to home Telltale play the characters of House Forrester, as we had an opportunity to witness what a small, Northern house truly looks like in the World of Ice and Fire. Asha Greyjoy refers to the Forresters as a 'clan' in the books, but instead Telltale can be considered to have played it safe and given us something they know we’re familiar with.

In this episode you take control of three characters; Mira Forrester, Ethan Forrester and Gared Tuttle, squire to Lord Gregor Forrester. The bulk of the action is centred around the fallout from the Red Wedding. In the Forrester’s home of Ironrath, Ethan must take command as the eldest man of House Forrester. Mira must play the game in King’s Landing to support her ever weakening house. Gared doesn’t offer much this episode, and as such his appearances are often short lived, which is fine as he’s a bit boring, in all honesty.

The episode gets off to a weak start, with an action sequence during the battle at the Twins during the Red Wedding. It’s littered with poor animation, hit and miss voice acting and quick-time events, making the first impression of the game a sour one. The quick-time events are the biggest offenders, as their prompts often blend into what’s happening in the background and are pretty easy to miss.

Once away from the Twins, you’re given a quick glimpse of Ironrath and introduced to the Forrester family. Again, this doesn’t feel like a particularly strong section of the game. Instead of meeting characters, you click on a tapestry and are then told all about the members of House Forrester. After being force-fed that poor exposition sandwich, Lord Whitehall turns up demanding an audience. This is where I began to lose hope for the game, as Lord Whitehall truly is an awful character. A Song of Ice and Fire (aSoIaF) and Game of Thrones are works of fiction that centre around the morally ambiguous. The most evil of men, the most vile of actions and the most heinous of crimes, all are grey on a moral scale. There’s no right and wrong in the world of aSoIaF, which is why Lord Whitehall stands out so much.

He arrives, shouting and swearing at a child and his mother about how happy he is about their recent tragedies. He continues on this way until he leaves, nothing more than a snarling, boring villain. He hates the Forresters, but you’re not going to know why. The Forresters hate him too, but that’s another one you won’t get to know about. The best you get is some Montague and Capulet 'well it’s been like that for a long time so there’.

Building to the finale Later, when you see Lord Whitehall with Ramsay Snow, the canyon in writing competence between the two characters is staggering. Ramsey feels dangerous, terrifying and unpredictable, where Lord Whitehall feels like a caricature. It’s as if someone wrote his entire character from a spider chart with the word ‘nasty man’ scrawled in a childish hand in the centre. Perhaps this is a sign of Telltale’s ineptitude at writing antagonists, George R.R. Martin’s Ramsay Snow is fantastic, whereas Telltale’s Lord Whitehall is somewhat of a joke. Come to think of it, I don’t remember a solid antagonist in a Telltale game, so maybe there’s some truth in that comparison.


Culminating in a jaw-dropping finale

Then you get to King’s Landing as Mira Forrester and you’re summoned before Queen Cersei Lannister and Master of Coin Tyrion Lannister. You’re there to explain your family’s allegiance to the Starks in the wake of the Red Wedding. This section is unbelievable and it’s difficult to describe without spoilers, but the writing, music and terrific voice acting make every tiny speech choice feel like a potential death sentence.

The game definitely picks up from the disappointing sequences earlier. Being interrogated by Cersei is legitimately stressful, even scary, and your interactions within King’s Landing really do make you feel like you’re taking part in 'The Game'.

The remaining hour after this continues to get better and better, culminating in a jaw-dropping finale I’m still trying to get my head around. It’s truly got the thrill of a GRRM chapter ending down to a tee, something that you might curse with this being an episodic series.

It’s a slow start to the first episode, but a promising beginning to the series. Telltale’s ‘Telltale Tool’ engine is really starting to show its age now, and perhaps it’s time they considered updating it. The argument that Telltale focus more on storytelling than aesthetic can only hold water for so long, and I was often ripped out of the immersion of the game due to strange clipping issues or poor animation quality.

That animation quality really does let down a gorgeous, oil-painted setting for the game. Where backgrounds are intentionally murky and blurry, characters often barge in with sharp edges. During movement the two combine into a strange blurry mess that can look pretty awful. That said, the backgrounds are often beautiful, it’s just a shame they’re let down by the character models.

It’s a first episode, that should intrigue show watchers, book readers and newcomers alike. The entire experience is Telltale down to the core, not Telltale at their very best, but an impressive first step into a world as deep and immersive as aSoIaF can be. There’s work to be done, but luckily there’s five more episodes to make those changes.