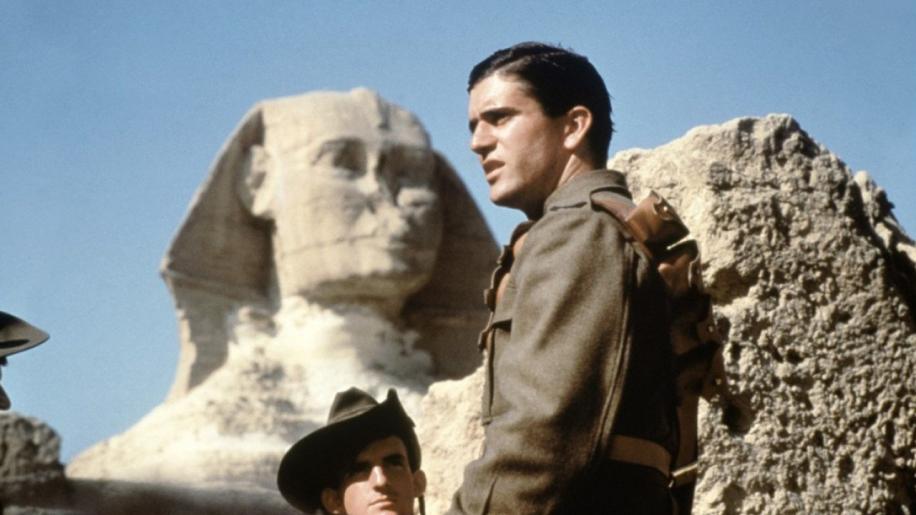 Paramount has certainly spruced up this new version of Gallipoli. Its anamorphic 2.35:1 image is excellently presented with strong, well-balanced colour and a beautifully crisp, clear picture that looks marvellous even on the biggest screens. The entire palette is vivid and bold, from the sun-scorched landscapes under smooth blue skies to the perfect skin tones and gleaming eyes, from the glinting of spent bullet casings to the bright red of Mel Gibson's neckerchief - all splendidly reproduced here on DVD.

There is a fantastic amount of detail on offer. The settings benefit the most with the vast Australian or Egyptian deserts very well delineated with strewn rocks, scrub-bushes, train tracks and the mighty pyramids, themselves, marvellously well picked out. The disc copes admirably with the myriad detail of the cluttered streets and bazaars of Cairo and, later on, the desperate squalor of the corpse-littered trenches. Even the small things, like the map of the campaign that Archie scrutinises on a newspaper front-page, or a soldier's last thoughts hastily scribbled in a letter, are well-rendered by an image that holds great contrast and stability throughout the full range of Weir's immaculate depth of vision and close-in intimacy. Solid blacks enhance the few night-time sequences, but add considerably to the shadow-play and atmosphere of the film at all times. Even the many enigmatic heat-hazes are nicely captured by the transfer.

There is some very occasional print damage here and there, but this is only of the slight pop and speckle variety. The print has undergone a pretty thorough clean-up job. Even the level of grain has been considerably reduced to reveal an image that is radiantly clean. What remains of the grain looks filmic and deliberate. On the digital front, there is only very minimal edge enhancement - although viewing on a large projection screen revealed some edges to be slightly jagged when set against bright backgrounds, the desert for instance. And there is some degree of flickering in the expanses of blue sky during the ramble over the lake.

But, be assured, Gallipoli has never looked better in my opinion.

The DD 5.1 mix adds a much greater, and very agreeable, depth to the film. Gallipoli is opened up across the front soundstage with clarity, strength and vigour. Voices, score and effects all add up to a lively and well-steered wall of sound. Weir pays tremendous attention to his soundtracks and, although Gallipoli was originally a much more contained track, he has certainly allowed some wonderful use of the rears to add plenty of ambience and musical boost to the proceedings. The howling desert winds and other natural sounds of the environment are subtly but pleasantly directed around the rears, lending a depth and atmosphere that the film really benefits from. The artillery bombardment carries a little bit of oomph, but don't get too excited. For the most part, the bombast is steered from a frontal assault and there is little to shake the room.

Dialogue is always clear and strong and the classical tracks on the score are treated to a fine delivery. Jean Michel Jarre's Oxygene sounds just fine, too. There is no hiss or distortion whatsoever, and the whole mix has a clean, well-produced feel. It's not up there with the current releases, but for a film hailing from 1981, this sounds splendid.

Besides the original theatrical trailer, this UK Collector's Edition is bolstered by the inclusion of the 6-Part documentary Entrenched: The Making Of Gallipoli. With a Play All Option that sees the full feature running for over 50 mins, we have the film's production and historical importance richly detailed and presented under the separate headings of The Call To Adventure (10.00 mins), Touching History (8.50 mins), The Theatre Of War (14.56 mins), Into The Trenches (15.15 mins), Moments In Time (8.29 mins) and Reflections (6.25 mins).

This is a terrific documentary, which features interviews culled from a greater feature which I believe is on the Australian R4 release. However, do not feel shortchanged, as there is plenty of anecdote, trivia and fact, both humorous and moving, to be discovered here. Containing great contributions from all the main players, including Weir, Gibson and Mark Lee, producers Patricia Lovell and Robert Stigwood, the screenwriter David Williamson, and even Frank Dunne's old mates, Snowy, Billy and Barney, too, this reveals the dedication and passion that went into crafting one of Australia's most celebrated movies.

There is a great deal of cynicism prevailing throughout the introduction, which chronicles the real-life debacle that saw the cream of a country's pride needlessly decimated, and rightly so. This is a story that cuts a nation to the bone, and many moving stories are related amid a wealth of period photographs. Weir, a staunch anti-war activist, tells of how he went to the site of the campaign (it is still preserved) and found a bottle of Eno's Fruit Salt (a ingrained part of growing up in Australia) amongst the debris still littering the place, that brought the conflict roaring home to him. It was perhaps this discovery, along with the haunting atmosphere of the place that galvanised him into making the film. He even reads a passage from a battle recollection that paved the way for his plot of two runners becoming embroiled in the war, and is visibly moved by its painful evocation.

Lovell pays good attention to the logistics involved in the making of the film, and how she had to re-mortgage her house in order to finance the project, before bringing in the big guns of Rupert Murdoch and Robert Stigwood. Gibson is on fine form, both articulate and interesting, as is Mark Lee, who has aged considerably better than his more-famous co-star. And the fine old trio of Robert Grubb, Tim McKenzie and David Argue have some amusing and insightful things to say about their collective experience on the film.

All in all, this documentary is very well-rounded and well-told, moving in places and humorous in others. Weir and co. give honest and heartfelt feelings, observations and recollections that are full of anecdote and poignancy, lending the feature a respectful and entertaining drive that hold the interest. Major thumbs-up.

Although this release differs from region to region, I can't fault this UK edition. The transfer is top notch and the 6-Part documentary is extremely good value.

Gallipoli marked a tremendous turning point for Mel Gibson, with Mad Max 2 just around the corner and world recognition waiting in the wings. And Peter Weir's reputation as a committed, intelligent and thought-provoking filmmaker was sealed. A classic of its genre, it is also an impeccable reproduction of a time and a place, and an ideology that helped shape a nation. My old reservation about the sudden climax may still stand, especially with the tantalising evidence that an extra scene going beyond it once existed, but this is a truly magnificent film that breaks with a lot of convention to place a deeply intimate story within a much greater tragedy. That it manages to honour both the plot and the truth is testament to the dedication of all those involved. An essential film with a small, but rewarding, roster of extra features.