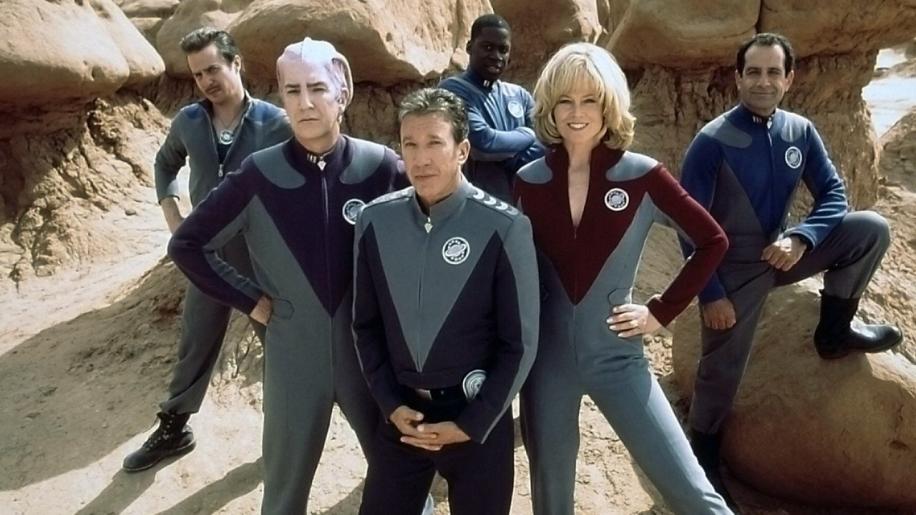 With innate timing, 'Galaxy Quest' arrives on Blu-ray concurrent with the release of the movie version of the series that it affectionately parodies - 'Star Trek'.
Not only that, it gives us the opportunity to see the main character actor of recent Blu-ray release 'Moon' (Sam Rockwell) in a performance that provides an answer to the question posed by those wondering what has he done before.
Hailing from 1999, 'Galaxy Quest' is a welcome addition to the high def format starring, as it does, Tim Allen (from TV's 'Home Improvement), Sigourney Weaver and British Thesp Alan Rickman.
When I think of 'Galaxy Quest', I automatically grin and for a film to engender this reaction from memory must mean that it is something that I hold dear - and I'm sure that feeling is shared by Trekkers and non-believers the world over.
Not only does the film take gentle swipes at the whole TV Sci-Fi show genre, it sends up ham acting, stereotypical characters and plot lines with a song in its heart and a smile on its lips. It goes one stage further though in setting up a proposition as to what would happen if a bunch of actors were suddenly expected to carry out the responsibilities of their fictional characters in real life. That's where the drama comes in that binds the whole cake together.

The film opens with a TV shape (1.33:1 aspect ratio) image during a dramatic moment in the 'Galaxy Quest' TV show - complete with cheap looking sets and bland lighting.
As Commander Peter Quincy Taggert (Tim Allen's TV show character) delivers the killer line , “Fire up the Omega 13!” the screen widens to the full 2.40:1 widescreen aspect ratio and we realise we're at a convention where the compere (Sam Rockwell) is now killing time in front of an audience of fans awaiting the arrival of the show's star, Jason Nesmith (Tim Allen). His neurotic and resentful co-stars also are waiting back stage as they have done many times since the show's cancellation several years previously. We're introduced to Alexander Dane (Alan Rickman) who played half human/half Alien Dr Lazarus in the TV show and now can't believe he has sunk so low as to do conventions while harbouring a hatred of delivering the line , “By Grabthar's hammer, ....” as he's a Shakespearian Ac-Tor at heart.
Sigourney Weaver's character, Gwen DeMarco, bemoans the fact that her TV character Tawny Madison only ever repeated the computer phrases during the show.
All the same, this group of 'has beens' is still taking the money for personal appearances. When the star of the show eventually deigns to turn up they are all shepherded on stage in front of the adoring fans who are desperate to ask many geek type questions during the autograph signing.
Here's where we meet a group of 'Thermians', who could easily pass for costume clad fans complete with curious speech intonations, but their credibility is in some doubt as they ask for Nesmith's help in saving their world.
Next morning they turn up at the star's home where a hung over Nesmith agrees to go with them, believing it to be a job or 'gig' to pay the bills.
Upon arrival, Nesmith is impressed with the 'set' that the Thermians have constructed from viewing the historical documents (the TV shows) and decides to humour his hosts by taking part in their 'pretence', but his cynicism waivers as he starts to see that it's all for real. After despatching the enemy alien Sarris in the style of his TV persona, Nesmith heads for home by a method that confirms his belief in the Thermians.
He arrives back home as the rest of the crew are appearing at a store opening and Alan Rickman's character is saying through clenched teeth, “By Grabthar's hammer, what a saving!”. The Thermians reappear telling Nesmith that his attempt to deal with their enemy had just made them angry and his help is requested yet again. Nesmith, now taking them seriously, enlists the help of the rest of the crew along with Guy (Sam Rockwell) who is fearful of an early demise since nobody ever knew the surname of his character and it was traditional that unknown crew members only ever lasted one episode.
So can a bunch of out of work actors save an alien race from the clutches of their adversary? Will the helmsman be able to pilot the ship? Can the Commander outwit the evil Sarris? Tune in next time to ...... sorry, got carried away there.

'Galaxy Quest' is a whole lot of fun with excellent performances from Tim (Tool man) Allen who shows what he can do with a good script. Alan Rickman is in fine form as the tetchy Alexander, who'd much rather be on stage and Sigourney Weaver is great as the sexy Gwen Demarco who complains that her boobs get more attention than her acting. While there are other very good performances, it's Sam Rockwell who steals the show with his paranoid outbursts concerning the longevity of his role. He's genuinely funny as the weedy character with the moustache grown to make him look older. When he 'grandstands' or 'larges it' in the finale, it's laugh out loud funny.

The Special Effects in this movie are first class, produced by ILM while make up effects were handled by Stan Winston and friends - putting the production on the same tier as big budget blockbusters. The director Dean Parisot believed that comedy is funnier if played straight, so the effects had to look good to fit in with this ethos.

The rousing score by David Newman captures the style of an old TV Sci-Fi show when required but at other times rises to match the on screen drama while resisting the urge to make it sound like a send up of a Sci-Fi movie.
All of the various elements combine to produce a very satisfying comedy/drama that makes many a nod to 'Star Trek' as well as other TV Sci-Fi shows.
By Grabthar's hammer, watch it tonight.