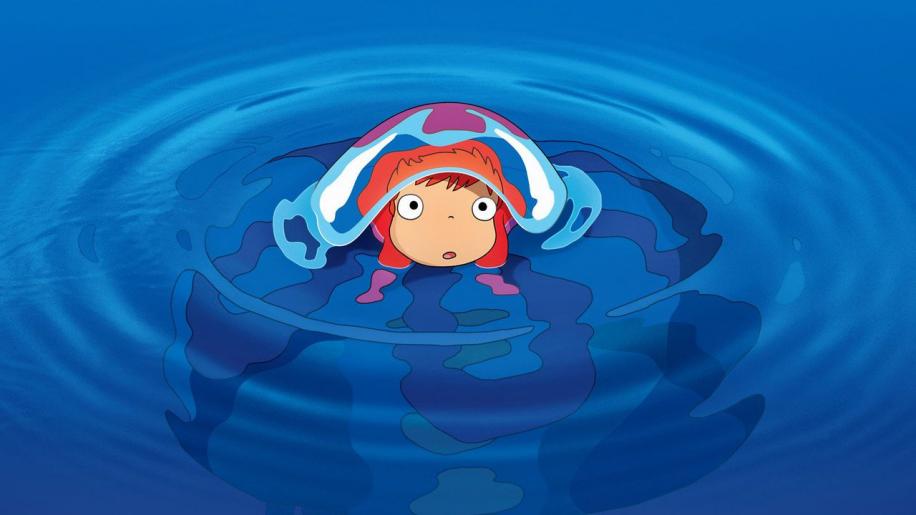 It would be fair to say that Hayao Miyazaki has enjoyed the kind of success with his films that many directors can only dream of. His penchant for crafting tales of poetic whimsy and childhood adventure have helped raise both him and the name of his studio to heights that few of his contemporaries, or even his peers, would realistically deem plausible. Being at once critically acclaimed and adored by fans of all ages and nationalities marks him out as a figurehead in the world of animation. His drive to produce works that incorporate a level of accessibility to all comers, as well as put forward a message of ecology in recent years have done nothing to diminish his appeal to ardent fans of animation.

With this his latest film, and the first to appear on Blu-ray, Studio Ghibli and Miyazaki return to what could be seen as a tried and tested formula, in essence a tale of climate, nature and man's effect on the world. Ponyo on the Cliff by the Sea has all the hallmarks of a classic Miyazaki film, but this mixture of familiar ingredients brings with it a few niggling doubts in the minds of some. The story set out, that of a fish saved by a young boy and their bond has more than an air of Disney's The Little Mermaid about it. This though is hardly surprising given that the director himself has admitted that the Hans Christian Andersen fairy tale was a great influence on him. So with thoughts of a Miyazaki tale that merely mixed Disney with his own ecological musings, some perhaps rightly doubted the two would gel or offer up anything new. Far worse, it may not even be unmistakably Ghibli in nature.

Within mere moments of the film, this multitude of worries is washed away in the oceanic tidal wave of gloriously magical imagery that is as much a staple of Miyazaki as hotdogs are of America. Little in the way of explanation is given for the wondrous world beneath the oceans or quite what Ponyo herself actually is, but rather than this muddying the waters it performs that most basic of functions of any Ghibli film, that of inducing a childlike wonderment at everything that happens. A strange anthropomorphic fish escapes from an underwater ship, a multitude of mammoth sea creatures float by as an unnamed man sails his vessel, which can only be described as a plesiosaur boat, with a bubble on his head, bedecked in a holiday camp style striped jacket. Nothing makes sense in these early forays into the underwater world of Miyazaki's imaginings, but the parameters for what can, and will, ensue are being lain down.

We primarily view the story through the eyes of Sosuke, a five year old Japanese boy who lives with his mother in a house perched high atop a cliff, overlooking the ocean. He represents the classic Ghibli protagonist, being full of wonder, enthusiasm and acceptance for everyone and anything that crosses his path. He spends his days playing by the sea with his green bucket and toy boat, and seems a contented boy, happy in a world of his own imagination and discoveries. It becomes clear early on that everything about this whimsical fairy tale is centred around the water that surrounds the characters. It becomes so pivotal that it actually could be described as a character in its own right as it has just as much influence on the direction of the plot as anything else. Once again Miyazaki returns to his musings about nature and the power of the elements.

The interesting point, from a traditional film-making perspective, is to note just how little time is spent establishing the central figure of Sosuke or Ponyo before their first encounter. The standard model for this type of story is almost a blue print. Usually the small child that finds a fantastical friend from another world or the like is shown to be essentially a lonely individual, with problems that might surround their family or their health. This tends to be played upon until sympathy is in ample supply from the audience and only then is there an introduction of true fairy tale elements. Miyazaki eschews these traditions and instead throws us headlong into the unexplainable, with nary a thought to first grounding the viewer in the mundane. Within the opening five minutes we have seen strange craft under the waves, Ponyo (whatever it is), the standard introduction of mankind's affect on the world via pollution, and finally Sosuke rescue this strange thing that we are later told is apparently a fish (though with a face). By all rationality this should not only fail to work, but be an unmitigated muddle that hinders enjoyment because of the whirlwind of new information we are being asked to accept as commonplace.

This is where the true sorcery of Miyazaki's plethora of talents becomes instantly recognisable. His work as writer, director and artist for the film have allowed him once again to weave together constituent parts that by rights should be counter productive to the story. He throws everything bar the kitchen sink at us so quickly that the thought of pacing becoming a problem is foremost in your mind. Surely this will cause a lag somewhere in the middle? Once again, the answer is a resounding no. It is a double sided story at heart and one that allows the director to maintain momentum and create a level of tension. By establishing the bond between the two early on, it becomes a tale of a separation which is the loneliness that one would have assumed would have been laid down as a character trait for Sosuke beforehand. This sudden onset of loss is palpable and at the very core of everything that happens afterwards.

We soon learn where Ponyo has been taken to, with issues of parental responsibility and dysfunctional families raised as barriers to the joining of these two friends. This wanting to be together drives us forward and allows for many fantastical forays into the magical and downright absurd which seem to pass as mere commonplace. The early interplay between Sosuke and Ponyo is so well orchestrated, with humour, affection and the kind of instant bonding that only children seem able to make, that the barriers put in their way are accepted as hurdles, be they a flooded road or a mad sorcerer, they are secondary to the relationship of these two youngsters. The imagery used never takes so much as a faltering step, with there being so many standout moments of sublime animation that to list any one seems almost absurd. However, I'd defy anyone not to see the magic in the sequence that requires Ponyo to dance across waves made of gigantic fish, a broad grin across her face, chasing the car that Sosuke is riding in. These scenes become more akin to an orchestral concert than a film, with the peaks and troughs of the music evoking the waves of the ocean as well as the highs and lows of characters' emotions. The sounds swell as anticipation rises and then wash away when hopes are dashed.

Miyazaki has once again created a tale that is quintessentially fantastical in nature and adeptly honed in order to evoke the sort of childlike emotions that are all too rare in cinema these days. It is accessible to audiences of all ages, but demands that it be viewed with an open mind. If you are able to simply gawp at prehistoric fish swimming across roads, a child that befriends a goldfish, and a mad sorcerer that wants to stop said goldfish becoming human, then you will no doubt find yourself in a world of wonderment. Ponyo on the Cliff by the Sea is an unashamedly feelgood film, full of unbridled enthusiasm, good humour and the kind of soul so often lacking in the vast majority of modern animations, Miyazaki has created another sparkling gem.