Do you do voodoo? 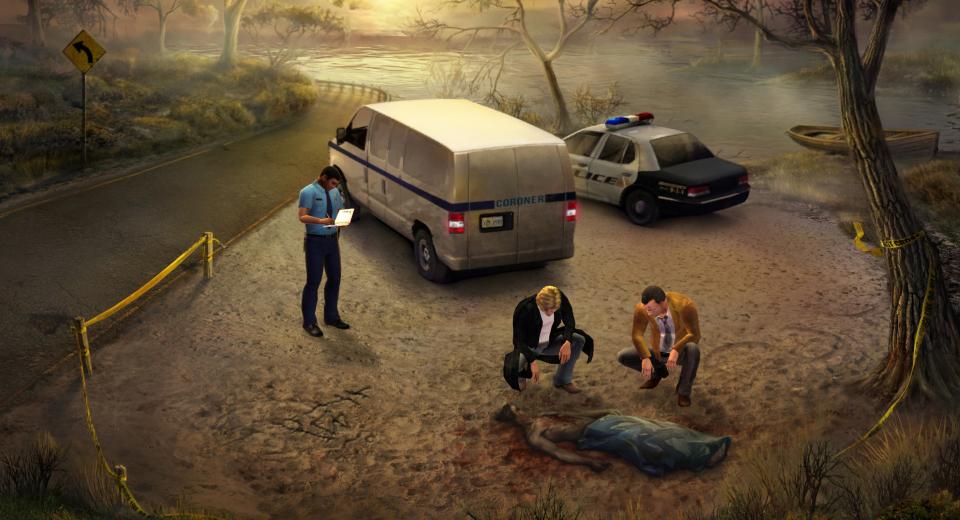 Who is Gabriel Knight?

Being remastered for its 20th anniversary, Sins of the Fathers showed some promise when previewed, but I still had my reservations, so here we see how the final version fares.

You control Gabriel Knight, an author, lothario and book shop owner whose research entangles him in the world of voodoo and murder. He's a strange comic character, full of childish sexism and as likely to grate as anything in the game.

As with the setting of New Orleans seeming pretty timeless, the story holds up in a similarly strong fashion. The voice cast play a major role in this as the cut-scenes - though intentionally comic book in style - play out in a clunky manner. The switching of aspect ratios should appear like panels in a comic book, but instead they’re more jarring, and the speech bubbles are more like the type that pop up in a text chat conversation rather than a stylistic flourish.

Luckily the story itself and how long the mystery is maintained keeps the tension up. Having not played the original when I previewed the game, I wasn’t overly absorbed by the premise, as the first couple of days are more scene setting, particularly now some events have been shifted. But the final game offers a lot more intrigue and suspense once you get past the initial couple of hours.

The voodoo lore is surprisingly in-depth, arguably going far beyond what was necessary, but it creates a solid atmosphere. Once all the pieces fall into place it’s actually a straightforward story that never offers the punchy twist the extensive scene setting and moody music hints may be lying in wait; it’s not a noir with a surprise ending, but more good old fashioned hokum, the type that used to underpin point and click adventures, and if you can buy into it, this game still has the potential to entertain.

Is this one for the fans? It doesn’t matter if you played the original, as it was Gabriel Knight’s first outing, so prior knowledge isn’t required to enjoy the adventure. This edition - though offering a nice trip down memory lane for fans - has been handled in a way as to make it as accessible as possible for new players. It’s a point and click title, using now standard mechanics, against the oft-used backdrop of a series of murders and some occult involvement.

There are some aspects that will be of greater interest to fans though. The inclusion of a star icon that allows you to view before and after shots comparing the old version to the update, design sketches and audio interviews with a few figures involved in the making of the game will probably be liberally checked by those with a memory of their original play through. Unfortunately in a few instances it does highlight the issue of designing an update that’s for both fans and newcomers alike, as it gives away a little too much in places before certain scenes fully unfold. It never spoils things, but it can slightly undermine the tension. Gone are the pixel visuals that seemed to define point and click back in the early to mid nineties, and in their place are a series of obviously significantly higher resolution backdrops; against which three dimensional character models move, and certain key objects are placed, for interacting with and to create a greater sense of depth. The character models aren’t particularly advanced, and there’s still a stilted motion to them; strangely, in terms of faces it’s Knight himself who seems to get the short end of the stick, having an excessively smoothed out complexion in comparison to other characters, like an ageing TV star shot with a soft filter.

The results for backdrops are good (even if I do still find the overall image a bit too sterile), and - barring a few distinctly lower res examples - they certainly seem to hit original creator Jane Jensen’s remit of infusing more New Orleans flavour into the settings. Small touches, like the ornate balustrades in Knight’s bookshop help immeasurably. As, it must be said, does the setting in general. New Orleans is a city dominated by an old vibe, and as such the feeling of playing an update never seems as jarring as it might had it been set in another location.


The clunky (but admittedly stylish) item bar that ran along the top of the screen in the 1993 original has been jettisoned and replaced by a much simpler modern system of contextual options for actions and a backpack inventory which falls in line with most modern point and click titles. The underlying game is largely the same though - the nitty gritty of item acquisition, interactions and looking for anything that may glint are staples that don’t really age.

Sadly the original voice recordings aren’t present, but the voice cast in the update is probably one of its strongest features. There’s not a line of dialogue that isn’t recorded, and the delivery and array of accents falls nicely into the comfort zone of pleasingly hammy, even if you’re sometimes not sure where the line of comedy ends. I take my hat off to actress who, whilst delivering lines in the voice of an elderly New Orleans woman, reads a poem in German.

How does it play? Split into ten days, each requires certain things to be done, sometimes in order, but at other times the order isn’t always vitally important. This doesn’t mean that you can skip further ahead to an end action, but that item acquisition isn’t as tightly tethered to prior actions as in other games that make things magically appear once you’ve jumped through the metaphorical hoops. The locations all have a pretty logical split to them, and it’s only once you get past the halfway mark that clues will be harder to find and progression takes on a more varied approach.

Progression wise, there have been a few tweaks in terms of which events happen on which days, and from what I can tell it once again helps to make things a bit easier to get into. So, some locations don’t open up until a little later, and this means there’s a bit less trial and error involved with chatting to too many people early on to uncover a lead.

The logic is still pretty obtuse in places though, which is where the ability to highlight all items in a room comes in handy via the space bar. There’s also a very clear hint system in place with various levels. The cooldown for the next level to unlock is too fast though, meaning the less patient gamer can practically skip ahead to the answer, undermining the point of it all. As a touch of variety, there are now eight full screen puzzles added to the game.

The 20th Anniversary Edition of Gabriel Knight’s first escapade has had a pretty successful facelift (though I still prefer my 2D pixels), is accessible to newcomers and yet still maintains the core of its appeal. This is largely due to the retention of some jovial and odd characterisations and just enough snappy dialogue to keep things interesting.

It’s not without its flaws, and the small team working on this clearly shows in some of the less than fluid animations and some rough edges, but the underlying adventure remains the same; if anything, the tweaks to events appear to have resulted in a more even pace.

As a love letter to the point and click genre, old school mechanics, hammy leads and absurd logic, the game excels, and though you can’t entirely look past its rough edges, in a strange way they almost become endearing; in that sense, the game fittingly reflects its lead character