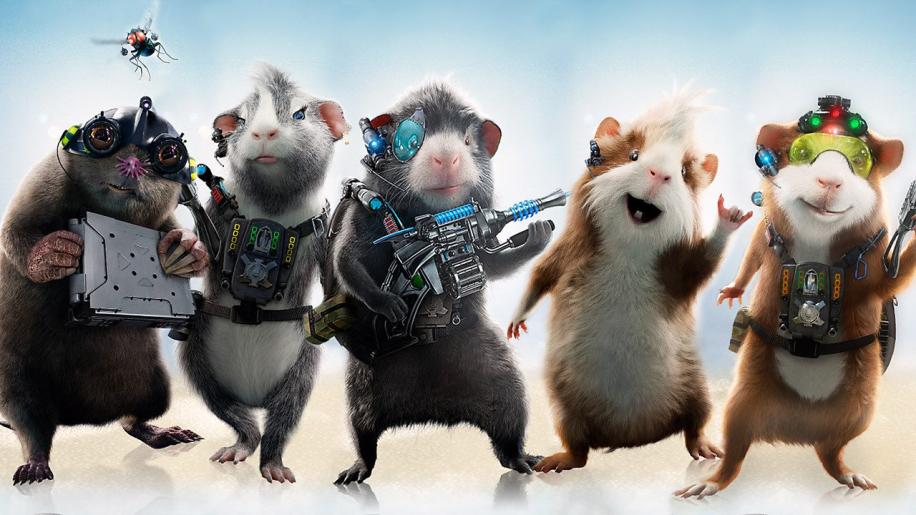 As Hollywood casts its net further and wider in its search for the next big movie franchise they draw on ever more thin ideas with which to make a script. M. Night Shyamalan makes films about stories he told his kids, Bruckheimer produces films based on fairground rides and now, with tonight’s feature, we have a film based on an idea conceived by a five year old. No joke. So with Bruckheimer producing for Disney we can expect massive production values along with a child friendly script; and on those terms G-Force is right on the money, and when viewed with that in mind you can just about forgive it, because the film has little to no substance and despite its frantic pace, plods along with nothing to say or get excited about ... unless you are a five year old. Call me cynical but I kinda need more out of my films these days.

The film starts off in a typical spy base with plenty of high tech. gear whirring away; the boss, Ben, talks to one of his operatives about how they are possibly going to lose their funding so have to launch a special ops mission to gather specific intelligence that will prove their worth and thus keep their unit alive. The unit is a special elite squad of guinea pigs trained in the art of espionage complete with ‘James Bond’ style equipment and start of the art monitoring kit; but that is not all, Ben, their trainer and developer, has perfected a human/animal interface enabling communication between the two species – i.e. the guinea pigs can talk. The team comprises of the leader, a weapons expert, a martial arts expert, a covert surveillance expert and a computer wizard; that is three guinea pigs, a fly and a mole respectively. Being of high production values the makers scored some serious acting talent, though quite why they opted to voice spy guinea pigs is another question.

In the lead role of Darwin, group leader of the covert team, is Sam Rockwell, so excellent in Moon, who has to give his character gumption, heroism, warmth and compassion; and whilst he does his very best with a limited script there is not much time to get a fully rounded character despite the few bumps that the character has to weather; it’s as if the makers were far more interested in getting to the next action scene than promoting empathy for the character’s plight, which, of course, they are, in a trait that is all too common in the modern kids blockbuster. Tracy Morgan gives Blaster voice and for the life of me I do not know how this man keeps getting jobs, he is neither funny nor entertaining, and his voice is just so annoying that the character drove me mad. Thankfully the sultry tones of Penélope Cruz, who voices Juarez, the last in the guinea team, more than make up for Morgan’s annoying whine. As a team these three share very little chemistry, but that is probably due to the speed of the script; there is an attempt made at a love interest between the three, a small amount of rivalry, if you will, but it’s blink and you miss it, meaning that the characters come across as simply saying their lines. Dee Bradley Baker, I think, has one line as Mooch the fly, although it sets up a pun which is pretty much the best line in the film. And finally there is Nick Cage as Speckles the mole, the computer genius, scarred for life by the murder of his family when he was a child, who is barely recognisable and plays an important part for the twist of the film – though when you watch it, you’ll see it a mile away. Honorary member Jon Favreau takes a break from directing to give voice to Hurley, Darwin’s ‘brother’, the stray guinea the team pick up in the pet-shop. He plays it large and comedic, and probably comes off the best because of it.

As a group the dynamic works pretty well, it's all cliché, of course, but within the confines of the ‘kids’ film it flows. They are slick and dedicated in their infiltration of the mansion at the beginning of the film, a huge amount of suspension of disbelief is needed to get over the fact of what the guinea pigs are actually doing, despite the claim that they are genetically modified and specially trained, more so when you consider what Speckles the mole can achieve, and once the big reveal occurs, for me at least, that belief was squashed under a falling piece of space debris; but I digress. The attack is akin to Mission Impossible with their stealth tactics and it only nearly comes unstuck when one of the guard dogs (who thankfully doesn’t talk) comes close to catching them. However the mission appears successful, the intel is gathered and the team is confident that this success will demonstrate to the FBI bosses that their unit is viable.

The human players in the film are headed up by Ben, the scientist behind the creation of the guinea team and he’s played by Zach Galifianakis, who looks, dressed in an ill fitting suit and bedraggled hair, like he has just walked off the set of The Hangover II not to mention he plays the character as dazed and confused as Alan. Seriously as the main human part he can only have a few minutes of screen time and all of it exposition, unless you count the big reveal, and then he just sits back to let the news sink in and watch as the guinea’s cope. His assistant has even less to do, still at least Kelli Garner, as Marcie, is good to look at. While the FBI agents are nothing more than generic cliché after cliché – men in black suits and sunglasses that refuse to listen to reason and want nothing more than to shut down a rouge unit that is seen to be ‘outside the box’. (And there you have the plot of the film.) Honestly the human characters are cardboard cut-outs and are stock clichés. Even down to the ‘baddie’ of the piece, Bill Nighy, who goes so over the top it’s not menace, it's comical; his big reveal is woefully played as well. With such uniformly bad performances from the human cast it is left up to the guinea pigs to carry the film. There’s a sentence I never thought I’d write. So, with the FBI hot on their paws, the team flee their base and have to suffer the indignity of being caged in a pet shop. However, with the clock ticking on global domination by our baddie, and military grade computer chips bring ordinary coffee machines to life (!), there is no-one but our intrepid spies to save the world; if only they can get out of the cage first ...

Visual effects expert turned director Hoyt Yeatman keeps the pace of the film incredibly high; it zips along from one action set piece to the next, barely pausing to take breath which, of course, means the frantic pace is at the expense of any character development; and this is despite the various threads that are weaved throughout to enhance the character motivations. The reveal of the guinea pigs true nature, the motivation behind Speckles or even the clumsy love triangle, all have the potential to add something into the mix of non-stop drive; but this is not how Yeatman carries the film – such developmental ideas are quickly brushed aside so that the next action set piece can come along. The trouble is with such aggressive film-making the film becomes like white noise; you know loud at first then it’s just back-ground then eventually you don’t hear it – well it's the same with G-Force; it opens up strong but with a non-stop deluge of action with no slowing of pace to catch up the film, instead of becoming more and more thrilling actually becomes boring. The characters are meaningless and their plight even less so; and the bigger and more outrageous the set pieces the deeper the boredom sets in.

However, it's not all doom and gloom. Peppered throughout the narrative are little nods to other action films, lines or set pieces that keeps the adults that have been forced to watch this rubbish thinking about better films they could be watching; references from Scarface (1983) to Transformers (2007) to Raider of the Lost Ark (1981), and, for me, at least, managed to keep the sandman at bay. Incredibly, despite being an awful film, clever marketing and a keen release has seen it make nearly double its production costs in its worldwide theatrical run, that’s excluding all the merchandise and gaming right’s that the film clearly has been written for. Seems with the Disney machine behind it guinea pigs can save the world!

In the end the film is pretty inoffensive, it doesn’t set out to conquer, it just wants to entertain; whether or not it succeeds in that regard will depend on your age; clearly, from its box office takings there are enough pet loving children to make it successful, but if you’re age is into double figures then you might find your attention wandering to other, far better films.