Topple Q Acoustics? Chance would be a Fyne thing. 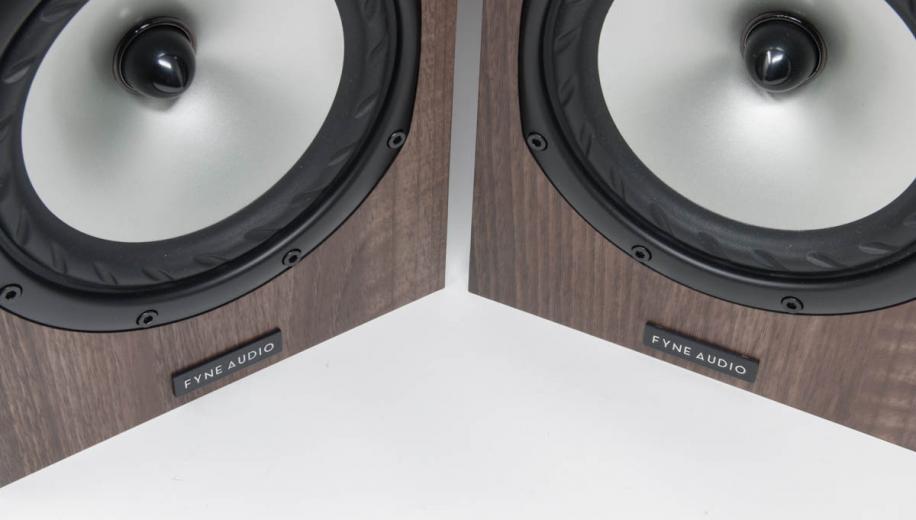 What is the Fyne Audio F301

The Fyne Audio F301 is a two way standmount speaker featuring a ported cabinet and a 150mm mid bass driver mated to a 25mm tweeter. Or, to put it another way, it is a £250 speaker designed in exactly the sort of way that you might expect a product of this nature to be. This presents an interesting situation because, as recent reviews will attest, we have a fair few speakers active in this category already. What sort of start-up feels that it can go head to head with the major brands active at the price?

The nature of Fyne Audio as a company throws some pointers that this speaker isn’t the result of dewy eyed innocents. The core team of the company comprises six men who collectively have over a century of experience in the audio industry (and the suggestion is that this is fairly evenly spread rather than five novices and Dorian Grey). Based in Glasgow, they have assembled a portfolio of dealers that include a few I know to be habitually at the point where ‘discerning’ meets ‘very, very choosy.’ They have additionally managed to secure funding from the Scottish Investment Bank to assist with further development. The speakers they have released so far have shown an interesting spread of clever ideas backed up with solid engineering. With the £250 speaker market being a busy one, how does this collective experience translate into reality? The F301 is the larger of two standmounts in the 300 Series of speakers and combines a 150mm (6 inch in old money) mid bass driver with a 25mm tweeter. The materials involved are conventional but there are enough twists to the basic design to suggest that there is more than a ‘me too’ process at work here. The mid bass driver is described as ‘multifibre’ which translates into something that is closer to paper but with some heavier materials present. This has been treated with a coating that means at first inspection, it can look more like plastic but when you touch it, the origin point becomes a little clearer.

Where this driver differs from many similarly priced models is that it uses a separate dust cap rather than a continuous profile cone. Fyne says this improves the midrange characteristics and it’s a relatively unusual thing to encounter at the price. The driver surround is also unusual. It is grooved rather than uniform and Fyne says this is much more than a styling exercise. The process is called ‘FyneFlute’ and is intended to offer a non homogenous interface that better controls the driver energy. The tweeter is a soft dome type which is far from unusual, although it is made from polyester rather than silk. In truth, a number of ‘silk’ tweeters are also made from polyester so Fyne Audio is at no disadvantage here. The quoted frequency response of 44Hz- 28kHz is competitive with anything available at a similar price and after a spate of low crossover setting products, it is interesting to see that the F301 bucks this trend and sets a crossover point of 3.2kHz which is more in keeping with where you might expect, in contrast to some of the sub 2k figures we’ve seen recently.

One aspect of the design that is quite unusual is the sensitivity and impedance. Fyne Audio quotes a figure of 89dB/w matched with an impedance that is given as 8 ohms. These two figures, if genuine (and in use, nothing has suggested that they aren’t), makes the F301 tremendously easy to drive and something that can be partnered with a wide variety of equipment without proving a challenge for them. Like the vast majority of speakers we’ve looked at recently, the F301 does without bi-wiring and uses a single set of three way terminals for connection. The cabinet is a flat sided MDF unit which makes use of internal bracing, which is calculated against the relationship of the panels to one another. The low end is augmented by a large rear port that seems to work at relatively low velocities. This means that even when you are leaning on the F301 in performance terms, the amount of air you can feel being moved via the port is relatively low which in turn helps the placement as even putting them fairly close to a wall has no significant effect on the performance. One slightly unusual aspect of the cabinet is that the tweeter sits slightly proud of the front panel in a curved gloss plastic enclosure. It is unclear whether this is strictly decorative or if there’s a sonic benefit to it.

If it is decorative, it helps to complement a speaker that is a nice piece of industrial design. The Fyne Audio is a slightly curious speaker in that when you first extract it from the box, it feels a little like a ‘greatest hits’ of other companies. That tweeter section is reminiscent of some Focal design practise while the driver, more than anything else, looks (if in no way feels) like the old Monitor Audio C-CAM type before they dispensed with the dust cap. Now they have been out and running for a bit though, there is a sense of proportion and design language that feels all their own. The review samples are in the darker of two wood finishes (a black is also available) and it looks and feels like a grown-up option at the price and something that will still look pretty good in a decade because it isn’t at the bleeding edge at the moment.

It is also well made. As I’ve mentioned on more than a few occasions, £250 is not a huge amount of budget to play with in terms of making something that sounds good, is well made and also attractive. Fyne Audio has done a good job with the F301 and the points of contact like the terminals and the grill- which makes use of magnetic tabs - all feel like a quality offering. This is a speaker you would be happy to have out on display in most rooms. The Fyne Audio was placed on a pair of Soundstyle Z60 stands and connected to a Naim Uniti Star all-in-one system, taking a feed from a Melco N1A NAS, a Michell Gyrodec with SME M2-9 arm and Cyrus Phono Signature phono stage and an HDMI ARC signal from an LG 55B7 OLED. All electronics were connected to an IsoTek Evo3 Aquarius Mains filter. Test material has included lossless and high res FLAC and AIFF as well as Tidal, Spotify and Deezer. There has also been use with broadcast and on-demand TV and some vinyl. The review samples supplied by Fyne Audio had clearly done some running before they reached me so I got them in and running with no dedicated run in period. The first aspect of the performance that was immediately apparent is that the sensitivity figures quoted by Fyne do seem to be wholly in keeping with reality. This is an extremely easy speaker to drive and one that seems to behave entirely benignly under all conditions. As well as meaning that it is likely to be an easy device for any vaguely competent amp to drive, it contributes to their sonic character too.

There is an effortlessness to how the F301 goes about making music, that is unusual in a relatively compact and active speaker. This doesn’t necessarily manifest itself in greater scale - as we’ll come to, the F301 has good bass extension but nothing that necessarily redefines what we associate as being possible from a £250 speaker. Instead, there is simply a sense of space and three dimensionality to the midrange that is notable for a speaker of this size and type. Listening to the peculiar but impossible catchy I Don’t Know! by The Suicide Sports Club, the F301 does an impressive job of capturing the peculiar cackle at the start of the recording. There’s nothing overtly showy about the way that this is worked into the mix, it is simply extremely well handled.

The tonality on offer is also very compelling and realistic. The lovely Fields by Junip is delivered with a lovely sense of overall tonal accuracy in which everything sounds ‘right.’ Guitars have the right sense of resonance and decay to them and the supporting drums are a believably three dimensional and weighty instrument. As noted earlier, the F301 doesn’t have more bass than most rivals. Instead, it cleverly uses that slightly larger 150mm driver to fill in the space between the lower midrange and the start of true bass extension in a way that is almost entirely effective. If you do lean on them and ask for both more bass and more urgency by playing something like the fabulously moody The Smell of Suds and Steel by Helena Hauff, the F301 holds its own. Compared to something like the more urgent Mission LX-2, the Fyne’s airiness and refinement aren’t quite so effective in the context of music to go mad in a field to but it latches onto the rhythm and delivers enough of the force and fury of the music to be a very satisfying partner. It has to be said that the F301 is more responsive to audiophile niceties than most of its rivals at the price. The manner in which it reproduces You Can Bring Me Flowers by Ray LaMontagne is outstanding for a speaker at this price. The flute towards the end of the song sounds like a real and believable piece of woodwind and even the very highest notes it hits are delivered sweetly and without any appreciable sense of strain.

What makes this more appealing is that Fyne Audio seems to have achieved it without the F301 being a mess with less brilliantly recorded material. It makes it clear that Feeder’s We Can’t Rewind is not a reference recording but it never remotely comes close to rendering it unlistenable. Using Spotify and Deezer doesn’t provoke it either. This is a very well sorted speaker and one that isn’t going to leave uncomfortable swathes of your music collection gathering dust.

The performance with TV and film material very closely matches this. That spaciousness and weight to the lower midrange is something that helps a lot of TV material sound more convincing than is often the case with small speakers. Dialogue is extracted from the mix in a manner that makes it easy to follow and crucially this is the case at low listening levels, as well as healthy ones (although, as noted, the F301 will give you a healthy volume level on fairly limited input power. There have been times when a little more cinematic excitement- the safe dragging insanity of Fast Five doesn’t have quite the unrelentingly ballistic quality that I’ve experienced elsewhere but as we’ve established, this is the acoustic equivalent of a lover, not a fighter. If you’ve read through rather than skipping forwards to the end (and boo to you if you did skip ahead), this is not a by the numbers start up from a by the numbers company. There is clearly a great deal of latent experience that has gone into the F301 and it shows with how grown-up this speaker feels. From the calm but attractive styling through to a sonic performance that is firmly aimed at long term satisfaction rather than blowing you away in the first five minutes, this is a company that has the courage of its convictions. There is no shortage of competition - and a showdown between the F301 and Q Acoustics 3020i could go either way - but this is a superbly realised effort from a company that means business. For all these reasons, the Fyne Audio F301 comes Highly Recommended.