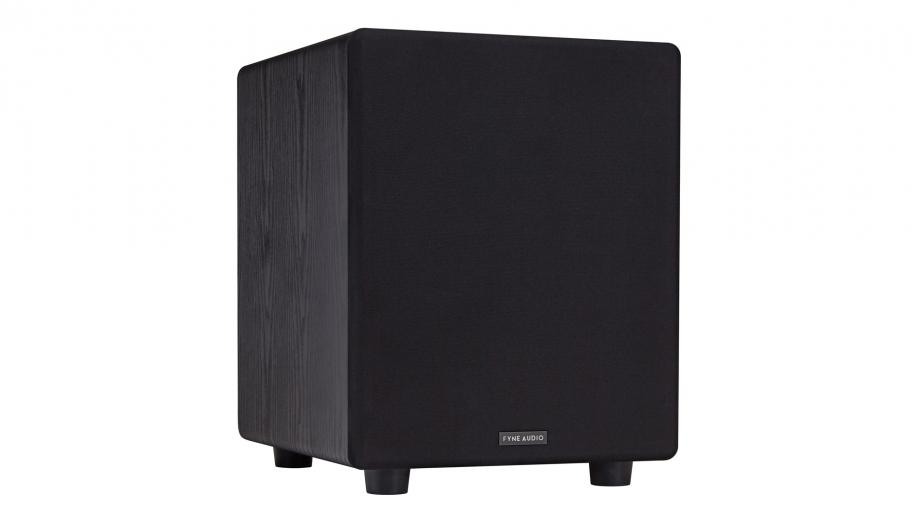 The Fyne Audio F3-12 is one of the first subwoofers released by a British start-up founded by a group of ex-Tannoy employees. As a result, this Glasgow-based speaker manufacturer might be new, but it has a design and engineering team with decades of audiophile experience. The company has already launched a number of speaker line-ups, including its F300 entry-level series.

Accompanying that range are the F3 subwoofers, of which the F3-12 is the flagship. It’s an impressively specified sub with a 12-inch driver, 520W of DDX Direct Digital Class D amplification and advanced DSP control with a Bass Boost mode specifically for home cinema LFE. What's even more impressive is you get all that for just £599. So, if the F3-12 delivers the sub-sonic goods, it could be a real bargain. The Fyne Audio F3-12 doesn't deviate from the standard subwoofer design, so you get what is essentially a wooden cube. It uses a high-rigidity MDF cabinet, with a solid if unexceptional, level of construction. There's only one finish – matte black ash – but at least you don't have to worry about fingerprints.

There's a forward-firing 12-inch (300mm) driver, with a large downward-facing port. The black fabric grille is removable and uses studs to attach to the baffle. The entire sub sits on four large rubber feet or, as Fyne calls them, 'compliant floor coupling mounts'.

Fyne’s simple approach to design extends to the rear, with stereo line-level inputs and a mono LFE input. There are some basic controls for level and phase, and a switch for the Bass Boost feature. This is a sub aimed squarely at multichannel systems and home cinema setups. The Fyne Audio F3-12 isn't exactly feature-packed, but that does allow the company to concentrate on performance. So what you get is a 12-inch (300mm) forward-firing, multi-fibre, long-throw bass driver combined with a large downward-facing port, and an enclosure with a volume of 53 litres.

This is powered by 520W of DDX direct digital Class D amplification. There's an 80Hz 2nd order low pass filter with an LFE provision. There's also DSP control with a Bass Boost feature aimed specifically at the LFE channel, and according to Fyne, the F3-12 can go down to 28Hz.

There's no remote control, but you do get a 12V trigger and an auto power off which kicks in after approximately 10 minutes of no signal. That's about it, but then I did say the Fyne was a little light in terms of features.

Fyne's philosophy is simple, concentrate on performance rather than features The Fyne Audio F3-12 is straightforward to set-up, thanks to its simplified rear panel. All you've got is the line-level LFE input with a choice of stereo RCA phono inputs or a mono LFE RCA phono input. So to connect the sub to your AV processor, amplifier, or receiver simply use a single LFE cable or a stereo pair.

There's often some experimentation when it comes to positioning a sub but the better you know your room, the easier it is to avoid any major issues. I placed the review sample at the front of the room, between my centre and left speaker in a spot that I knew was reasonably balanced.

Then all I needed to do was choose between Normal or LFE for the input, set the phase correctly (reverse or normal), and adjust the sub level accordingly. The only other setting is the switch for the power on mode, which you can simply leave on auto.
The connections are limited but setup is easy and there's a DSP Bass Boost

The Fyne Audio F3-12 proved to be an impressive first effort from the fledgling company. I often use the very beginning of Edge of Tomorrow when testing a subwoofer because there are a couple of massive bass notes that go right down to the lower registers, resulting in a sub-sonic experience that you can literally feel.

This particular test tends to sort the men from the boys as far as subwoofers go, revealing any limitations in terms of depth, control and sustainability. The F3-12 handled this particular test with the confidence of an ageing pro, no doubt thanks to all those years of experience in the design and engineering teams. As a result, the bass is both deep and well defined but also distortion-free, filling my home cinema with a wave of low frequency energy.

The rest of the film doesn't shy away big bass moments either, especially during the repeated beach assault. The F3-12’s ported driver dug deep, producing plenty of bass energy as explosions tear up the sand and heavy gunships slam into the ground. There's a pleasing percussive kick to the gunfire and a nice sense of weight to the exo-suits. Amongst all this pyrotechnic mayhem, the Fyne proved surprisingly nimble for a ported sub, handling the transients extremely well.

I then tried Unstoppable, because what better way to test a subwoofer than with a film about a runaway train. I know that Ed Selley swears by this disc, and who am I to argue. The action certainly boasts some impressive bass effects that give its wayward locomotive a genuine sense of scale. The F3-12 produced the kind of subterranean bass needed to realistically portray the feeling that a massive train the length of the Empire State Building is careering through your home cinema.

A more recent addition to my collection of films that are ideal for testing subwoofers is Overlord. This particular film sports a very dynamic soundtrack with titanic amounts of bass. It's not exactly subtle but uses bass to underscore action sequences in a way that's sure to please any home cinema fan.

The film opens with a parachute drop over Normandy on the eve of D-Day and as an explosion tears through the Dakota carrying the main characters, all hell breaks loose. The sky is filled with the percussive slam of flak exploding all around and ordinance rips through the air. A plane erupts into flames with a roar, and as another crashes into the ground there's a seismic thump that's perfectly timed by the Fyne to match the visuals. This sub's sense of timing is impressive, as is its precision and control.

There’s a lovely sense of detail to the F3-12's delivery of sub-sonic effects that justifies Fyne's decision to keep things simple and concentrate on getting the basics right. At the end of the day, a subwoofer is about moving large amounts of air to generate low frequencies, and this sub does exactly that. However, it doesn't just throw around all this low-end energy so that it ends up swamping the rest of the soundtrack; instead, it underpins the rest of the mix, providing a solid bass foundation on which the other speakers can build.

The Fyne Audio F3-12 is a genuinely impressive subwoofer that represents a real statement of intent by the fledgling speaker manufacturer. The design, connections, and features are fairly basic, but this sub has the necessary size and power to hold its own against more expensive competition. The ported cabinet allows it to go deep, but it remains surprisingly agile and has plenty of control. There's excellent responsiveness and bags of detail, even as it delivers those lower frequencies. Best of all, this fantastic performance is delivered without breaking the bank, and as first efforts go the Fyne Audio F3-12 is hard to beat.

The REL HT/1205 is an excellent recent alternative that also keeps things simple in terms of design, connections, controls, and features. The low-frequency delivery is superb, thanks to a fast and responsive performance created by the sealed cabinet. The 12-inch driver and 500W of amplification go deep, but there's still plenty of control. This sub creates a big and bold performance but, on occasion, it can lose a bit of subtlety and detail as it mines the depths. However, it's a great sub and although it's £699, at the moment REL is also including the HT-Air wireless transmitter with every purchase, which evens things out.