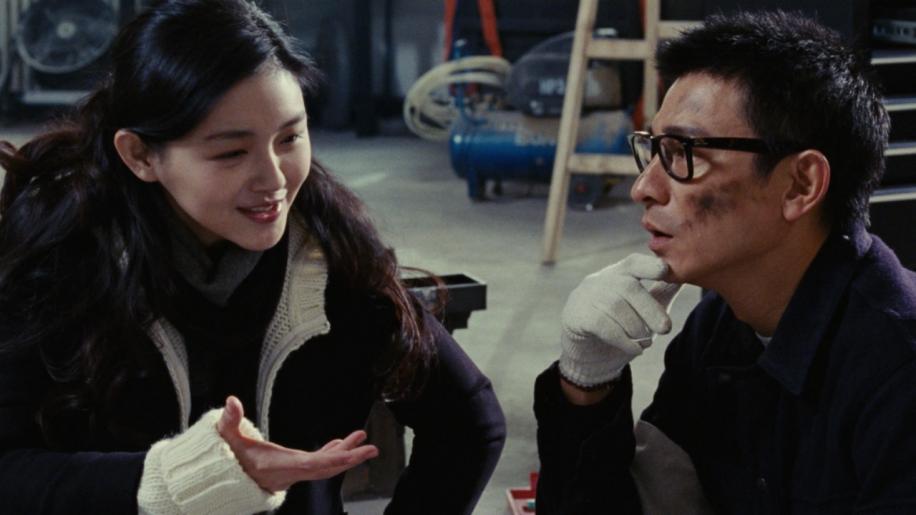 Sometimes you see an actor that you recognise take on a role which you just would not have expected from them. I remember Michael Caine doing an interview where he admitted that he only did the film Piranha because he needed the money, and there are no end of action stars over the years who have dabbled in kid-friendly misfires (Schwarzenegger's Jingle All the Way, Stallone's Stop or My Mom will Shoot and, more recently films like Tooth Fairy with The Rock). But it can be quite a shock to see a serious actor take a part in really cheesy, tacky production with mistimed comedic sentiments, a terrible plot and cringeworthy effects. Andy Lau was integral to the seminal Infernal Affairs trilogy (in the West, most will recognise these films only because the first was unnecessarily remade into the undeserving Oscar-win for Scorsese, The Departed). He also starred in House of Flying Daggers, one of the top wuxia productions. So why would he now don a cheap-looking robot suit and try to play it straight in a film as truly terrible as Future X-Cops?
It's 2080, and the world has been saved from an energy crisis by massive advances in solar technology. Dr Masterson, widely regarded as the 'father of Solar Energy' is pivotal to these developments, and so a somewhat irate bunch of oil tycoons decides to dispatch a group of cybernetically-enhanced assassins to kill him. Although they fail, they do rack up a high body count during their assault, killing top cop Kidd's wife. So when the tycoons scheme to send the surviving assassins back in time to 2020 so that they can kill Dr Masterson when he was still in school, Kidd volunteers to go back and protect the future hope for the planet. Will Kidd be able to keep his futuristic identity secret from the cops in 2020 long enough to stop the determined assassins from carrying out their mission?
Honestly, the only reason you might get any pleasure from this film is if you are a young boy who loves the tacky, gaudy frivolity of Power Rangers and are happy to watch your children's movies with subtitles. It's a terrible film. Within seconds your jaw will drop at the awful special effects and you will wonder how anyone in their right mind greenlit the project, let alone allowed it to get released like this. The movie opens with a green-screen Andy Lau riding a space-cycle through a terribly-rendered future Hong Kong, and parking on a runway in a building. When he gets off his bike you wonder whether this is an elaborate joke, but you know that it is not. That the cast are taking themselves relatively seriously and playing the material straight, despite the fact that that generally involves wandering around in stupid suits and pretending to be fighting opponents who have giant, gleaming CG appendages to their bodies. Oh look, this guy thinks he's Doc Octopus from Spiderman 2. Only without a Hollywood budget it looks more like he is just playing around with giant, shiny, fake Styrofoam arms.
Sit through another hour of it and really it only gets worse. After Lau's unnecessarily over-the-top mourning battle-cry as he clutches his dying wife whilst fighting off the assassins with a giant CGI digger (which happens to have about 6 different CGI appendages of its own), he camps it up back in 2020, where his exploits often result in him having to be dangled from visibly obvious wires whilst fighting off cross-dressing armed muggers. Seriously, I kid you not. Apparently it took 19 rewrites for the script to get to a stage where Lau was prepared to get on board the production. Honestly, I would have been suspicious after the number of rewrites hit double-figures, and I have no idea why he agreed to do this.
He's not the only one who shouldn't be here either: with Ip Man's Fan Sui-Wong desperately trying to be taken seriously as the leader of the cyborg assassins and Bodyguards and Assassins' Fan Bing-Bing trying to make her death meaningful as the ill-fated wife and fellow cop, Millie. In fact, I think only My So-Called Love's Barbie Hsu manages to retain some dignity, at least playing her role as sweet 2020 cop Holly (who also happens to be the inexplicable new love interest for the hero) totally tongue-in-cheek. Perhaps if they all took this whole thing less seriously it may have been more fun, but unfortunately they don't, and it isn't.
I think that even the target audience of young children are going to be disappointed with what is on offer here, there is simply nothing redeeming or accessible about it: the humour is badly timed, the fight sequences are clumsy, the outfits are silly, the effects are abysmal and the story is a rip off of the decent Van Damme sci-fi actioner Timecop. The Director Jing Wong apparently never intended to make a sci-fi movie, but was instead aiming for a moving romance. I'm not sure where it all went wrong then, but I don't trust the guy because he hasn't made a decent movie since his early days (where he did the enjoyable God of Gamblers trilogy with the legendary Chow Yun-Fat). Of course it does not help that he has been using the same effects company since his work on Wesley's Mysterious Files, and the effects haven't improved one iota in the best part of a decade! James Cameron he is not. Honestly, I can't see who is going to enjoy this film and would love to hear back from somebody who did. I haven't seen a movie yet this year which I have been driven to award a 10/10, but at least now I have seen a movie which deserves a 1/10. Steer clear.