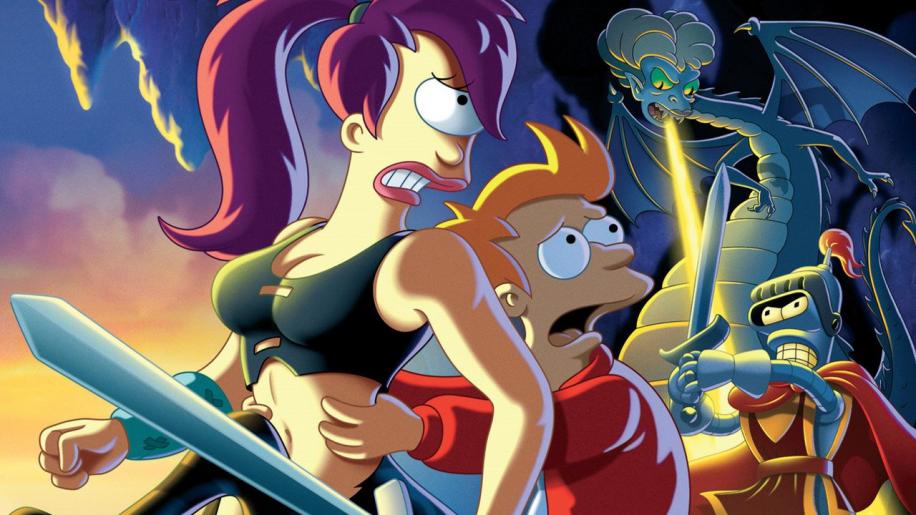 The success of Matt Groening is certainly well documented. “The Simpsons” is universally regarded as a work of genius, having evolved from its humble beginnings as a minor piece on “The Tracey Ullman Show” back in 1987, to become the longest running American animated TV series. Along the way it has won countless awards, been broadcast throughout the world and has the stars of the day queuing up to appear in the fictional town of Springfield. But what of Groening's other cartoon creation for the Fox network - “Futurama”? How can one follow what many have acclaimed as the greatest TV show of all time? Well, rather than merely continue in the exact same vein of humour, merely superimposed on another setting, Groening teamed up with David X Cohen and instead decided to veer off into the realms of indulgence.

The scope of “Futurama” as a series far outweighed that of “The Simpsons” as it placed itself in the universe of futuristic sci-fi. However, though we're all familiar with the utopian image of flying cars and 50s style domesticity as depicted by “The Jetsons”, here Cohen and Groening decided to use the freedom of a completely unhindered reality to take broad swipes at present day values and institutions. The series, being untethered by any notion of what would or wouldn't exist in the year 3000, had free rein to surmise what the future would hold if any number of present day scenarios evolved to end world style conclusions. Many of the premises explored amid the general japery of the cartoon were surprisingly mature in their analysis of the present climate of consumerism and giant corporations dominating our world.

However, for all the good of the series, it inevitably fell, engulfed, in the shadow of its elder more successful stable mate. Unable to bear the brunt of continual comparisons by a public unable to comprehend the shift in focus of humour, it sadly was axed by Fox in 2003 after less than four and a half years and with only four seasons completed. That was not quite the end of the imaginative tales of our merry band of futuristic oddballs as it continued to be aired on other networks and eventually was commissioned for four straight to disc feature length films. The first of which was 2007's “Bender's Big Score” which was followed up the next year by “The Beast with a Billion Backs” and this, the third in the series “Bender's Game” (also released in 2008). The tetrology will be completed this year with “Into the Wild Green Yonder”. Though the film count stands at four, there are just the two directors overseeing the action. Dwayne Carey Hill (a man who has worked in many capacities on the series over the years in such departments as animation, visual effects and assistant director) takes the helm on the first and the third and Peter Avanzino dictating shots for the alternating features numbering 2 and 4 in the set. This overlapping output has allowed a steady stream of productivity as shown by the releases being spread over just three years. What is left to be seen though is how well these films gel together when viewed as a form of fifth season. This ultimately will be a case of hindsight judgement as for now we must make do with looking at whether “Bender's Game” holds up as a feature film by itself and if it can stand alongside the best the franchise has offered us down the years.

So, enough of the history and onto the movie itself. Clocking in at 87 minutes, it's safe to assume that far more is packed into this than the average episode. For those unaware of the premise of the story, we find our employees of Planet Express struggling due to the continual increase in fuel prices (it sounds all too real so far). Unsurprisingly, Mom (owner of the delightfully named fuel company “Mombil” and ever present baddie from the TV series) is the one behind the price hikes so as to make even more profit from her ownership of the world's only dark matter mine. With dark matter being the sole fuel for spaceships, our merry band of deliverymen finds themselves in a pinch. This plot is cleverly coupled with the intertwining story strand telling of Bender's inability to play Dungeons and Dragons because he lacks an imagination. This show is nothing if not unpredictable, because I was already expecting many tin man jokes and perhaps a “Wizard of Oz” parody, but I was barking up the wrong tree. That would have been far too conventional for the geek chic of “Futurama”.

What follows is an onslaught of sci-fi and fantasy film and TV references much like the series but only more heightened. Clearly the driving force behind the feature length films is not so far from that of the series, in that it is still unable (for better or worse depending on your view of such animated fare) to pander to the mass market. If there's a reference in here and you are not a fan of the aforementioned geekier genres then it'll most likely fly straight by you. The whole experience seems to have been tailored to the nerdier film fan with the most central parodies being “The Lord of the Rings” but with other classics such as “Star Trek” and “Star Wars” being lampooned also. The main narrative mimics many key points of the “Rings” trilogy for much of the film as Bender somehow magically transports everyone to his new found imagined fantasy realm of Cornwood where he is entitled Titanius Anglesmith. Here Leela becomes Leegola, a centaur from a race of expert archers, the professor becomes a Gandalf like wizard and Fry is Frydo (I suppose that name wrote itself). Carrying on with the parody, Frydo must carry a magical Dungeons and Dragons die in order to destroy it in the “super bombastic bubbling plastic from whence it came”. Unsurprisingly as our hero's journey continues Frydo is slowly seduced by the power of the die, eventually snapping “hands off the dodecalicious”.

These are all broad strokes of humour, but in truth the gems are the small jokes that speak volumes about the love and attention the crew behind this still feel for the universe they created. The destruction derby towards the start of the film begs to be freeze framed as you can make out a host of familiar space ships that are gone from the screen all too quickly. During the ensuing mayhem, the disembodied head of George Takei, piloting a ship similar to The Enterprise smashes into Scott Backula yelling “way to kill the franchise Backula!” These references are a string that holds this feature together perfectly. We see the Cornwood version of orcs - grotesque Robin Williams figures - Morks (from the TV series “Mork and Mindy”). As they approach, they are viscerally hacked to pieces whilst still mumbling “Mork calling Orson”, “nanoo nanoo” and “shuzzbutt” etc. No nod to the science fiction genre is more throwaway than the plaque placed upon the mental institution Bender find himself in - “The HAL institute for the robotically insane”.

Ultimately, it is these minor treasures that give the film a sense of a shared interest with the viewer, a feature that was made specifically for their target market and helps to define this from other animated offerings. This isn't a story the whole family will enjoy, it isn't as mainstream as “Toy Story” or “The Simpsons Movie”. Instead it falls far closer to the recent “Family Guy” outing “Blue Harvest”. Rather than having a broad appeal consisting of extremely accessible jokes punctuated with slightly more obscure japes, it bases its entire central plot on the geekier side of the street, with the mainstream asides being more the filler in this sandwich. For those who avoided “The Lord of the Rings” and the like, there is still a lot to be laughed at, but unfortunately it falls as rather simplistic when the original subject material isn't familiar to the viewer. Put simply, if you enjoyed the series, then this will no doubt already be on your wish list, but for those left cold by that or thought that it at times ventured too far into the realms of nerdiness, this is one best to be left on the shelf. I for one thoroughly appreciated the attention and care in the detail lavished upon such objects as the Lego ships and the minor puns that are so well thought out. At its heart this is a spoof that utilises the cast of the “Futurama” universe and does so to very good effect. As a fan of spoofs, sci-fi and just about every one of the pantheon of original materials used to create this patchwork quilt of a feature, this was always likely to tickle my funny bone. Put simply, much like the series, it is an acquired taste that hits its marks and proves fulfilling if you are willing to accept that it won't dilute its humour and meet you half way when you don't understand.