All fuse and no bang? 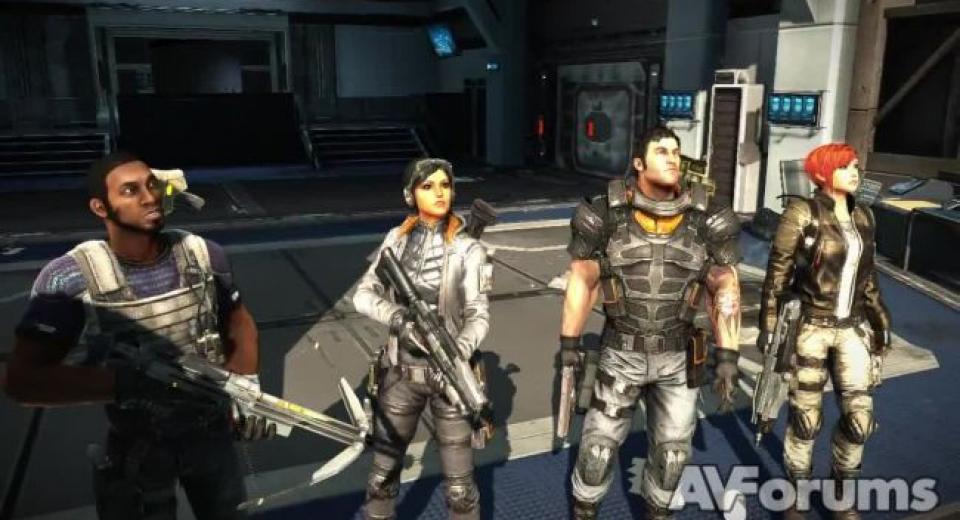 Four player co-op games are no longer a novelty these days, experiencing the campaign of a third person shooter with three of your Xbox Live buddies is now almost a standard for those who can shoe horn in a reason to have 4 characters on the screen at once. When Fuse was announced in its first incarnation as Overstrike at E3 2011 it showed off Insomniac not only flexing their ability to create interesting weapons, but also a Pixar-like art style and attitude which went a long way to setting it apart from the crowd.

Somewhere along the way Insomniac got cold feet and decided to sanitise the personality on display and turn it into the equivalent of The United Colours of Benetton in space. Our four characters hit a broad cross section of demographics nicely. Up front there is Dalton Brooks the wise cracking every man, Izzy Sinclair a whizz kid red head, Naya Deveraux who ticks the eastern box on her diversity questionnaire which just leaves Jacob Kimble...black guy. The dialogue between the team and the occasional character specific cut scene offer you a brief taster of the people beneath the stereotypes but nothing like what was implied previously, as such you tend to identify your characters more by their weapon than anything else. Fuse offers you the ability to jump between the members of Overstrike 9 as you see fit, allowing you to take advantage of all the weapons and combine them in some entertaining ways.

Dalton equips a Mag shield which projects a large shield when aiming down the sights, letting teammates shoot through and take cover at the same time; Izzy packs a shatter gun which crystallises enemies, freezing them and leaving them open to being smashed into pieces; Jacob comes with a crossbow which liquifies enemies, whilst Naya won the weapon lottery and was gifted a rifle which fires miniature black holes and is entirely as awesome as it sounds.

In single player jumping between the characters and using their unique abilities when the situation dictates was actually a lot more dynamic than first thought. Many will likely gravitate to a single character at the outset as the cover based pop and drop gameplay requires little more than a steady aim to progress. When the larger enemies and bosses appear the limited ammo for your Fuse powered weapon forces you to jump between squad mates; not just for extra firepower but to get yourself out of sticky situations. Secondary abilities turn out to be crucial, Naya can cloak to get behind enemy lines, whilst Izzy has a health grenade which - with a deft throw - can revive people from across the map. The weapons are certainly well designed and extremely fun to use, the upgrade trees allow you to power up the weapons to devastating effect, often turning combat encounters into a race of who can gain the most ridiculously spectacular kills. The key element though is the balancing of the weapons and abilities with the character switching. Although level design and enemy encounters are nothing out of the ordinary you will need to use all of your characters to survive, individually they are powerful but small ammo capacity means said power is limited. These limitations are for your own good, Fuse indeed looks somewhat generic but the real danger was the game being played in the same fashion. The interplay of the abilities and weapons is what keeps the combat engaging and once you get a handle on just how you want to play you can have a lot of fun.

At first I was content sitting back with Jacob and moving through encounters cover by cover, head shot by head shot, occasionally switching to Naya to play with the the Warp rifle which may have the most satisfying weapon sound I've ever heard. By the end of the game harder encounters and boredom forced me to entertain myself. Running into an area infested with enemies I would switch to Naya; use my upgraded cloak ability which lasted longer and melee kill as many enemies as I could get away with. Once the situation got hairy I would switch to Izzy and throw a health grenade at Naya; allowing her to beat a hasty retreat with her warp rifle as I moved Dalton up with the Mag shield to cover her escape while Jacob hit head shots with extra damage due to firing through the safety of Dalton's barrier.

In single player some quick fingers and semi competent AI mean there are some enjoyable encounters which allow you to experiment beyond the standard third person shooting conventions. In co-op the removal of AI is always preferable when there are friends to fill the slots and coordinating attacks more precisely rather than trying to orchestrate everything yourself can enhance the interplay between players. Still there is something lost in not being able to body swap at will; jumping out of a character near death to avoid being down but not out, or cycling through the characters in a boss fight just to use all their ammo is lost in co-op, further boiling it down to its generic roots once your Fuse weapon is empty. Co-op then is perhaps best reserved for the wave based Eschelon mode which as usual pits the players against 12 waves of increasingly difficult enemies with a boss wave thrown in now and then for good measure. They continue to lead the player to water by placing an emphasis on aggressive play with game types like Critical Drop, which has you fighting to get to crates of loot around the environment. The scoring comes to the forefront here with the combination of weapon effects making for some satisfying battles as you race for the kill, the glory and the cash

Teamwork is essential, 4 lone wolves will get torn apart whilst teams communicating and working together will be much more successful, even if the person with the mag shield will feel like little more than mobile cover by the end of the session. Rewards come in the form of credits which can can be used to augment your character with perks that effect the whole team and other trivial rewards such as character and weapons skins.

The box art for Fuse says it all, cropped out are the heads of our protagonists , devoid of much of the personality they were conceived with and now the focus is squarely on the weapons they hold. In Insomniac's defence they have implemented a well thought out set of weapons and abilities which are fundamentally enjoyable to play with. The problem lies in everything else; from the watered down characters, the generic environments littered with handy chest high walls and a throw away story which boils down the same old save the world schtick.

Fuse will likely entertain you and 3 friends if you are in search of a new co-op experience, and single player can be fun if you embrace the tools Insomniac have provided, but if you aren't willing to step out of your comfort zone or simply don't have co-op partners on standby then there isn't much reason to look twice at Fuse.