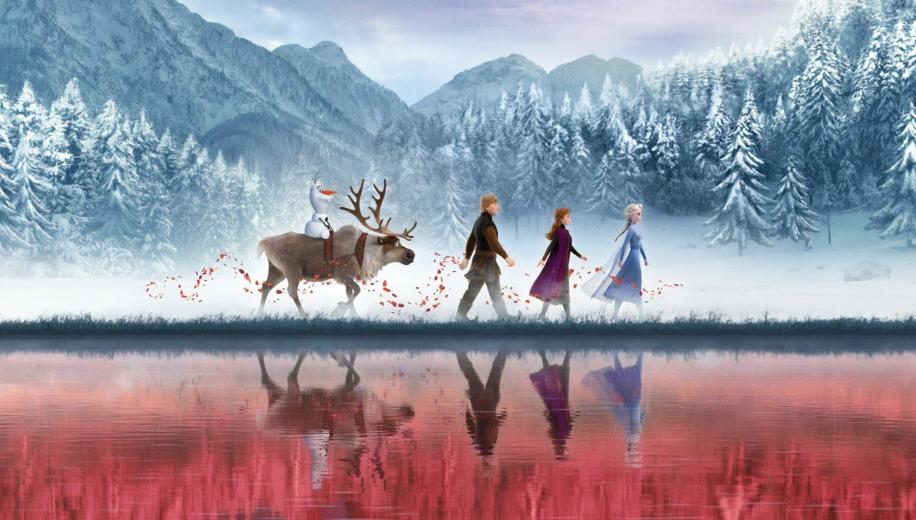 Six long years later and this sequel proves worth the wait - not quite matching the wonder of the first but providing a magical new adventure nonetheless.

An expectedly magical family experience, and hopefully there won't be an inordinate wait for them to put together the next one

With a whole roster of writers involved (which is never a good sign), the team work twice as hard to conjure up some magic this time around, and mostly succeed, delivering some genius ideas (the floating bejewelled explosions, the standout setpiece on the ocean which earns Elsa a new ride and doubles down on merchandising) and tying up a surprisingly complex plot that involves not only their parents but grandparents, as well as a mysterious native tribe that lives in the enchanted forest.

Somewhat less successful is the time-hopping memory-water, although it does pave the way for the funniest scene out of both movies, as Olaf takes a minute to basically send up everything that went on in Frozen - a wonderful bit of self-aware satire which few will resist absolutely laughing out loud over. And the songs? Well, they attempt to win you over by sheer volume this time around, but a few do creep into your brain like earworms. Neither living up to its predecessor, nor indeed the teaser trailer which was just about one of the best put-together teasers of late, this is still an expectedly magical family experience, and hopefully, there won't be an inordinate wait for them to put together the next one.

Frozen II comes to UK 4K Ultra HD Blu-ray not long after the 4K bow of the first movie, also boasting an unsurprisingly 2K digital intermediate, which has been used for this Ultra HD Blu-ray release. Nonetheless, despite being an upscale, and despite the lack of Dolby Vision, it's a thoroughly gorgeous looking 4K presentation.

Detail is impressive throughout, as these slightly older and more refined characters get a makeover commensurate to the 6 year upgrade in technology, maintaining the same loose style and look but updating the depth and intricacy of the detail immeasurably. There are a number of absolutely jaw-dropping vistas, and nuance is a priority, affording impressive richness throughout.

Even though Dolby Vision should have been an obvious add, Frozen II does exceptionally well with its commendable utilisation of WCG and standard HDR10, affording some wondrous almost alien landscapes draped in glowing purples and blues, even before Elsa starts whipping up a storm - her magic clashing with the ancient magics of the land in a striking battle of neon forces that will dazzle. There's plenty of demo awe on offer here, and it's a superb double-down on the already impressive 4K presentation of the first Frozen film.
﻿

The accompanying 3D object-based high definition immersive audio track is of the Dolby Atmos variety and, as with the first film, it hits all the right notes in both providing an engulfing experience, and a suitably punchy demo one too, rich with exciting set pieces and emotional ballads to carry you through.

Hits all the right notes

Dialogue comes across clearly and coherently throughout, unsurprisingly afforded prominence across the frontal array, whilst effects pick up on the exciting setpieces, delivering electric superpower effects as the dazzling displays of magic whip up a storm across your array. It's here where the surrounds and object-based design comes into play, happy to crash a boulder down near you or deflect fire with ice, whilst the sweeping, impassioned score rises high to dominate during the song tracks. There's some not insubstantial LFE weight too, although a little more would have left this an even better track, robbing it a reference score.
﻿

Although there's little on the 4K disc itself, the accompanying Blu-ray contains a decent smattering of supplemental material, largely focussing on additional songs, scenes and fun.

A decent smattering of supplemental material

There are a few short Featurettes looking behind the spirits and the creation of the score, a sing-a-long option for the film (also on the 4K), Deleted Scenes, Outtakes, Deleted Songs, Concept work on the ethereal character haunting Elsa, Music Videos, direct Song Selection and a hilarious option that blends Into the Unknown into a 29-language rendition.

Fans of Frozen should throughly enjoy this return to the wonderful universe created - worth the wait may not quite fit the bill after six long years, but few fans will find any flaws with this charming and heartwarming follow-up which may not take many risks but also barely puts a foot wrong when delivering a solid sequel.

Disney's 4K release of Frozen II will sit proudly alongside the recent 4K release of the first film, delivering excellent video and audio, as well a welcome selection of fun extra features. Fans should certainly consider it an absolute must-have.
﻿