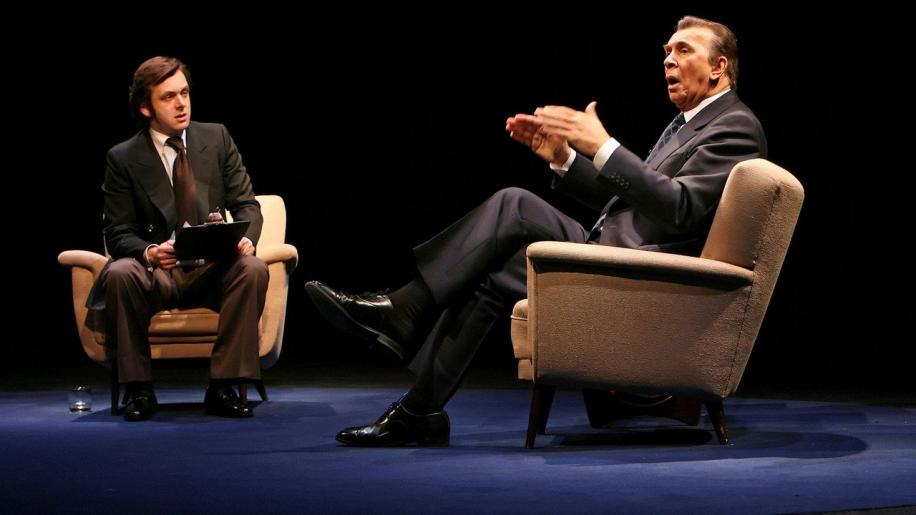 Amid all the run of the mill movies produced each year, there's the occasional picture that stands head and shoulders above all the others. Such movies restore your faith in the belief that somewhere out there, still exist people who know how to make movies that will capture and hold your attention for at least 90 minutes. These are the old school directors, who know how to tell a story well and who understand human behaviour without the need for CGI, stunts or explosions.

Such a movie is 'Frost/Nixon', directed by Ron Howard - who will forever be remembered as Richie Cunningham in the 'Happy Days' TV series, but who has also directed fine movies like 'Apollo 13', 'A Beautiful Mind' and 'Cocoon'.
This is a director who knows his stuff. He knows that what gets an audience involved in a movie is 'human-ness' - if there's such a word. The ability to know what characters are going through so the audience can relate to them through shared experiences. The ability to touch, to tug on heartstrings when necessary and to know what makes people sit on the edge of their seats. These are the stock in trade of a good director. Ron Howard has these skills in spades.

Take a seminal moment from American TV history - a showdown between two giants! The Frost/Nixon interviews.

Take one ambitious TV presenter with the desire to make a name for himself as a heavyweight interviewer.

Take a wily former president and old hand at the interview game in search of a quick buck who also sees this as a chance to put himself in a good light as he feels he can take charge of the chat.

Take the American public, desperate to see their Premier apologise for letting them down - as they saw it, over Cambodia and the Watergate scandal.

If you're thinking this is going to be too dry or high brow for you, then you're kidding yourself. I like action movies as much as anyone else, but this movie had me riveted.
It was like watching a boxing match but with words instead of fists.
To say that this is an original film would be wrong, as it started out as a play by writer Peter Morgan at the Donmar Warehouse in London before moving on to run in New York. The play, like the movie, starred Michael Sheen as Frost and Frank Langella as Nixon.

The movie kicks off by bringing us up to speed quickly over the main titles, where we're given a quick recap of the events surrounding the Watergate scandal through the use of TV newsreel footage and the subsequent resignation of the American President, where we first witness Langella as Nixon.

We're introduced to David Frost, played with spooky mimicry by Michael Sheen (who has also recently so accurately portrayed Kenneth Williams, Tony Blair and Brian Clough) while hosting a popular Australian TV chat show.
The germ of an idea for an audience busting series of interviews is sewn in his mind as he muses on who he would have to interview to take the world by storm.
Cut to the LWT canteen, as he queues for lunch with John Birt (Yes, that one - former DG of the Beeb) played by Matthew MacFadyen then a young, upwardly mobile producer. Frost outlines his plans as he wants Birt to take leave of absence to come and produce his interviews.
Frost arranges the interviews with a $200,000 up front payment out of his own pocket to Nixon. We then see his machinations as he desperately tries to sell the interviews to the big TV networks - only to have a damp cloth put on his chip pan fire, when they consider him too lightweight, unknown and inexperienced to bring it off and put bums on seats.
With the partial support of a few 'non blue-chip' backers the taping of the interviews goes ahead.

In the red corner, we have Frost and his two researchers Bob Zelnick (Oliver Platt) and James Reston Jnr (Sam Rockwell) with John Birt in attendance.

In the blue corner we have Nixon, his aide Jack Brennan (Kevin Bacon) and a team of 'his people'.

Now, this is where the movie really gets into its stride.
In the first interview, desperate to show he means business and throw the first punch, Frost breaks contractual agreements by launching with the question about Watergate, “Why did you not burn the tapes?”

Nixon genuinely seems taken aback for a few seconds then proves that you don't mess with a great statesman. He's a cat toying with a mouse. He falls back on his years of experience gained by dealing at the top table and with great ease urinates all over Frost's parade.

The series of six interviews took place over a period of months in 1977 and as Frost's performance improves we see the pressure on him increase.
By the final interview, Frost knows he has to throw the killer punch in an attempt to extract an apology from the former President for his 'mistakes' or his own reputation will be in ruins - and he'll be broke into the bargain.
Prior to the interview, he instructed Ralston to do some extra research that may just provide him with the crowbar he hopes will put Nixon on the spot.
The rest, as they say, is TV history...... and downright electrifying it is too.

David Frost: Are you really saying the President can do something illegal?

Richard Nixon: I'm saying that when the President does it, that means it's not illegal!

The performances of the two main characters are so believable that you forget you're watching actors. They are Frost & Nixon!

For all of Michael Sheen's photocopy of David Frost's speech patterns, looks and character traits it is Frank Langella who truly walks away with the performance of a lifetime. As much as I hate to use a much hackneyed modern phrase, he really does inhabit the role of Nixon.
During the shoot the actor insisted on staying in character, not just on set, but all of the time. Cast and crew were asked to address him as 'Mr President' even while getting him a coffee.

Director Howard adds to the real feel by intercutting actual period TV news footage together with grainy 16mm look 'piece to camera' interviews with John Birt, the two Researchers and Jack Brennan, so we see them as their characters - embedding them in the story and drawing the audience further in by suspending any disbelief.
At the end of the day there's only one short word I can think of to sum up Frost/Nixon as a movie.