From Dusk Till Dawn Movie Review 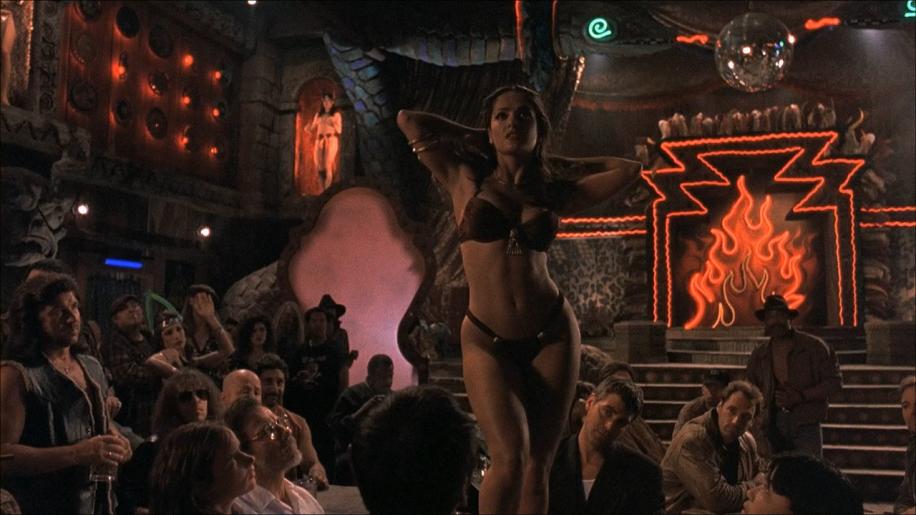 Written by Quentin Tarantino, and directed by Robert Rodriguez, From Dusk 'till Dawn first burst onto our cinema screens in 1996. At the time, Tarantino had already unleashed Reservoir Dogs and Pulp Fiction onto our screens, and this time it was the turn of one of his screenplays to be filmed by Rodriguez. I am not a scholar of the history of Tarantino, but I am guessing it was probably the success of his first two movies that led to this being made. After all, the plot does not sound like one which was likely to get the executive juices flowing at the big movie companies

Coming off the success of the TV series ER George Clooney was one of the biggest TV stars in the world, but had yet to break through into the world of film. It showed his edginess and bravery that he chose to go for the lead role of Seth Gecko, playing against Tarantino himself as the other Gecko brother Richie. When the film opens, Richie has just sprung Seth out of jail and they have engineered a bloody escape. With the proceeds from a series of increasingly bloody robberies they are planning to make it across the border to Mexico where they can retire on the proceeds.

It is on this journey that the brothers bump into the Fuller family - Dad Jacob (Harvey Keitel), daughter Kate (Juliet Lewis), and Scott (Ernest Liu). The family are on a holiday to get away from their life. The lady of the house has been killed in a car crash, and Jacob (a preacher) has left the church after losing his faith. Unfortunately, the Gecko brothers decided to take the family hostage in order to help them get across the border.

From Dusk Till Dawn is a most schizophrenic little movie. It begins as a criminal on the run drama, with tight pacing, close editing, and a focus on character and dynamics. Then they cross the border and arrive at their venue for the night, the “Titty Twister” bar. At this point, the film takes a rather dramatic turn, moving into over the top violence as it turns out the locals are not quite what they seem.

It is this refusal to conform to any kind of cinematic convention that makes the film so satisfying to me. It is almost as if Tarantino and Rodriguez sat down and decided to make the most anarchic, most strangely structured film ever - and they really do succeed. From Dusk Till Dawn has always been one of my favourite films, and a cult success, quite simply because it has a gleeful sense of fun when rendering the destruction on screen.

There is no sense of fun in the opening scene however. A store clerk is talking to a local cop in an out of the way convenience store. The tension is racked up here in a very clever way. We are on the edge of our seats, but we do not know why. I have seen this scene many times over the years, and I still think it's beautifully constructed and shot. I cannot put my finger on what the filmmakers do during this scene to achieve this, but it immediately raises the film above the pulpy, exploitation flick that you might expect. Of course, your instincts are right, and all hell breaks loose within the first five minutes. And then it just doesn't stop for the entire running time

And it is this dichotomy that to me makes the film such a success. Rodriguez is a brilliant filmmaker, and Tarantino a great writer and this means even when making a schlocky venture like this, the result cannot help but to raise itself to a higher plane. The talent behind the camera is matched with that in front of it. Clooney, as we know now, is a fine actor but at the time he had an awful lot to lose by choosing such material. However, he approaches the material in a serious way, never treating the role in a condescending manner He is matched in this by the other talent. Tarantino is a little over the top in his portrayal of Richie, but even he shows a surprising amount of talent here. Just look at the scene when Seth returns to find Richie has allowed his evils perversions to get the better of him. This could have been an exploitative scene, but due to the way the actors and director approach it, it is surprisingly moving.

It goes without saying that Keitel provides excellent support too. A preacher who has lost his faith may be a little clichéd, but in the hands of this fine actor the character jumps out of the screen and really makes you feel for him - a man who has to be strong in order to save his children at a time when he has never felt weaker. Now, it should be clear here that none of these performances are OSCAR-worthy or anything like that - but for the genre these are certainly very believable

The beginning scene may well be full of tension, but as the film goes on the sense of fun ratchets up. Once they reach The Titty Twister, the level of humour increases. It may not be high class, clever humour - but again within the scope of the film it works really well. You can be simultaneously laughing at the dialogue, and grossing out at the events on screen, so again the sheer schizophrenia of the film shines through. Admittedly, the effects are extremely low budget, but this just doesn't seem to matter. That is part of the film's charm. And here, nothing is sacred. Gross, naked vampires, sexual parts grossly emphasised, poking fun at a characters 'Nam experiences, everything is fair game here - and the anarchy just drips off the screen.

Of course, the film is not to everyone's taste. It does lack the sparkling dialogue of vintage Tarantino scripts, and the abrupt change of pace about half way through does not sit well with a lot of viewers. But if you like your movies to defy tradition, to just simply gleefully tell a story without caring who they offend, and to back this anarchic style up with strong performances from respected actors (and Quentin Tarantino) then this is the film for you. It has become a big cult hit, and it really is not hard to see why. Take the above ingredients, add in one of the sexiest onscreen dances of all time courtesy of Salma Hayek, and simmer with a really strong bluesy soundtrack - and this is an absurdly enjoyable two hours of fun.