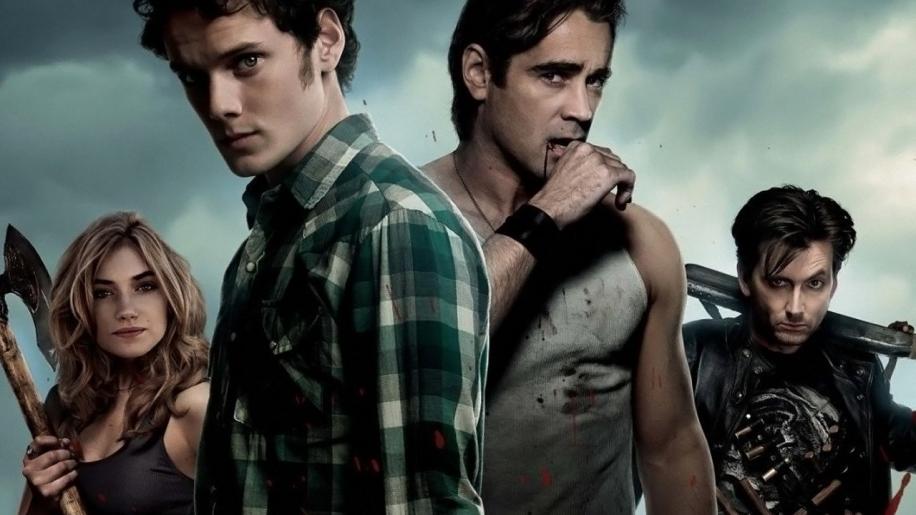 These days you can’t move for vampire movies, the multiplexes are full of them, loitering around looking moody with their hands in their pockets. But there was a time when vampires were decidedly uncool, so much so in fact that some films would go to great lengths to claim their undead blood-sucking villains weren’t even vampires. During those dark times a good vampire movie, one that actually wore its teeth on its sleeve, was rarer than a sunbathing Nosferatu. So when the original Fright Night came along in 1985 it was like a (garlic) breath of fresh air, carefully setting up the rules of vampire mythology and then gleefully knocking them all down. With the resurgence of interest in vampires, it was only a matter of time before someone decided to remake the original, taking that film’s approach and giving it a modern twist.

The setup for the new Fright Night is basically the same as the original, a stranger named Jerry (Colin Farrell) moves in next door to teenager Charley (Anton Yelchin) and his mother (Toni Collette). Charley’s former friend “Evil” Ed tries to warn him about all the kids that have gone missing from school, which Ed is convinced is the work of vampires. Ed soon realises that Jerry is the culprit, after all where better for a vampire to hide than Las Vegas, a city that comes alive at night. Eventually Charley realises that Ed is right and must fight Jerry himself, enlisting the help of a Las Vegas magician called Peter Vincent (David Tennant).

Using the same basic premise the new version of Fright Night has a great time playing with the rules of vampire mythology, setting them up and then gleefully knocking them down. It also subverts the characters from the original, giving the 2011 versions an interesting twist. For example, whereas Chris Sarandon’s Jerry in the original is very suave, Colin Farrell’s version is far more earthy and animalistic in nature and given the Vegas setting a lot more sleazy. Speaking of Mr. Sarandon, it was nice to see him turn up in the remake in a fun cameo and good to see he still looks as suave as ever.

The same is true of the character of Charley, who in this version is a teenager who has recently been accepted by the ‘cool’ kids but hides a nerdy past. His acceptance into the popular clique is in part due to his new girlfriend, played by the gorgeous Imogen Poots, who is clearly out of his league. Charley has to worry about both his mother and his girlfriend falling for Jerry’s lascivious charms.

The character of “Evil” Ed has undergone the most change and it's hard not to feel somewhat sorry for him, especially as Charley is fairly mean to him in an effort to keep his nerdy past hidden. In the original film, Ed is Charley’s friend but after being turned into a vampire he relishes his new power and becomes one of the most memorable villains, especially after he has a cross burnt into his forehead. Unfortunately the new version of Ed is a far less memorable character and the actor that plays him, Christopher Mintz-Plasse never feels threatening, partly I suspect because you’re constantly reminded of ‘McLovin’. Let’s just hope that Mintz-Plasse has a more promising career ahead of him than Stephen Geoffreys, the actor who so memorably played Ed in the original. Sadly stardom did not beckon for young Mr. Geoffreys and he ended up spending the 90s working in films with all-male casts, and no we’re not referring to Glengarry Glen Ross.

Saving the best until last, we have Peter Vincent (originally named after Peter Cushing and Vincent Price) who was played perfectly by Roddy McDowell in the original as a washed up TV presenter introducing horror movies on a show called 'Fright Night'. It was Vincent who explains all the supposed vampire rules and then discovers that half of them don’t work unless you actually have faith. In the new version we have a very funny David Tennant delivering a merciless send up of the kind of shock magicians who are always playing in Vegas, especially Criss Angel. Tennant's Vincent is playing in a live stage show called 'Fright Night' and he is probably the best thing in the new version, then again McDowell was the best thing in the original.

The inventive screenplay, excellent cast and effective direction, all combine to deliver a hugely enjoyable vampire movie that mixes the right balance of scares and laughs. The effects are also very good, turning Jerry into a terrifying creature when he needs to be. Apparently, since the film was a Dreamworks production, Steven Spielberg was involved and it was he who insisted Jerry have a shark-like jaw, which certainly had the desired impact. The Las Vegas setting also works very well and it is easy to believe that vampires could hide out in a city which comes alive at night and in which people only stay for a short time, so no one would miss their victims.

Sadly what does not work as well as the film itself is the 3D photography on Fright Night and unusually for a film that was actually shot with native 3D cameras, the 2D version is the preferred viewing option. Obviously as the title would suggest, the majority of the film takes place at night and the darkness of the image causes real problems when it comes to the 3D. There is no question that the 3D is well photographed because the daytime scenes look great, with plenty of depth and some effective composition. The problem is, these scenes are few and far between and once we head into night, any sense of depth or definition is lost.

To shoot in 3D you need a lot of light because without being able to see backgrounds your eyes can’t interpret the information as depth. This is one of the reasons that the 3D in Tron: Legacy is so poor, the black backgrounds make it impossible to judge depth. Unfortunately the look of Fright Night is almost exclusively dimly lit sets, so what you end up with is a series of incredibly dark scenes which appear flat and thanks to the dimming effect of the 3D glasses, it is impossible to make out any detail at all. The reality is that dark moody lighting doesn’t really lend itself to 3D photography and with hindsight the filmmakers would have been better off shooting in 2D. It is interesting that on his Alien prequel - Prometheus - Ridley Scott is using far more light on the sets than he normally would because of the 3D cameras. However he intends to darken the film using digital grading in post-production, which will give him far greater control over the amount of light in the scenes and therefore the perception of depth.

It’s a real shame that Fright Night is so dark because there are some quite impressive 3D moments in amongst all the gloom. There are a few instances of objects coming out of the screen and the effect when the vampires explode after being exposed to sunlight looks very cool. Sadly in their rush to jump on the 3D bandwagon, the filmmakers have scored something of an own goal when it comes to the 3D version of Fright Night. At least there is the option of watching the film in 2D because the 2011 version of Fright Night is one of the better remakes that has been released recently, taking some of the elements that made the original unique and giving them a modern twist. The cast is very good, the plot is effective and the effects are fairly impressive, resulting in a film that delivers the right amount of laughs and scares.