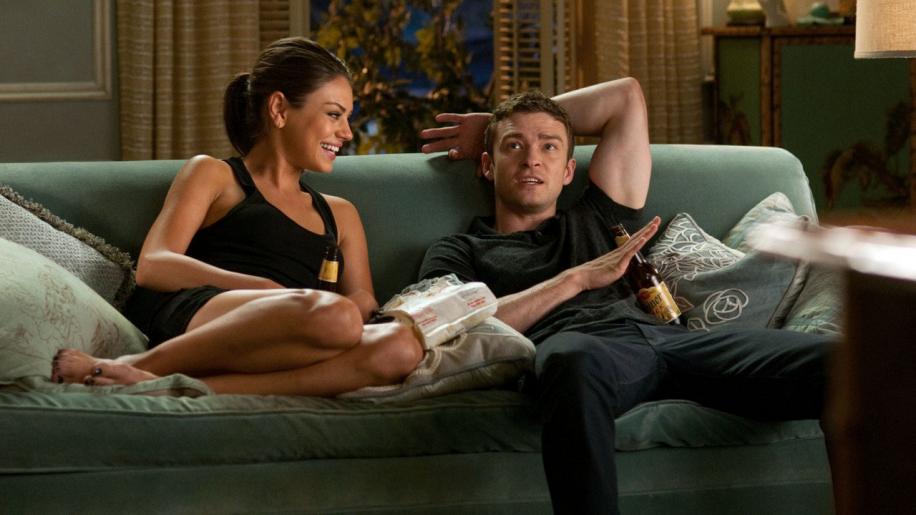 Are you sick of half-baked romantic comedies that provide neither enough genuine romance nor enough actual comedy to entertain even for their desperately short 90-minute runtimes? Whimsical in their representations of love, crude and unrefined in their attempts at humour, wouldn’t it be nice to have something a little different, which looks at the truth behind the fairytale romance without completely ruining the illusion; which pays respect to the romcom genre without treading in the same footsteps as every other Jennifer Aniston / Jennifer Lopez / Sarah Jessica Parker flick out there?

Welcome to Friends with Benefits.

Far from a masterpiece, it’s still an eminently enjoyable romantic comedy which both pokes fun at – and pays tribute to – the genre from which it emanates, in much the same way as Shaun of the Dead and Hot Fuzz did for zombie movies and buddy-buddy cop movies respectively. It’s fairly honest, without being downright cynical, and it features charming dual performances from Justin Timberlake and Mila Kunis, both hot young upcoming stars who provide more than enough energy and chemistry to keep you entertained.

“We really have to stop buying into this bulls**t Hollywood cliché of true love.”

Jamie (Mila Kunis) is a headhunter in New York, who has set her sights on Dylan (Justin Timberlake), a promising young art director working in Los Angeles. Her job is to get him to sign up to a position with GQ magazine in NYC and, to that end, she flies him over for an interview and takes him around the City, showing him the more unusual sights and events around New York. Persuaded to take the job he moves to New York and, not knowing anybody else in the City, he starts to hang out with Jamie – pretty soon they become good friends. One day, whilst watching a cheesy romcom together on the sofa, they start up a conversation about sex and friendship, and how it would be great if you could remain friends, but enjoy the benefits of a healthy sex life too. Vowing not to become emotionally attached, the two decide to be friends with benefits.

What? You could have guessed that much from the title? You want me to talk more about the plot? Well, suffice to say, that – ultimately – Friends with Benefits really, erm, benefits from the fact that it tries really hard to surprise the viewer at every turn, so much so that to describe what happens in greater detail would do the script an injustice. Sure, I did say it tries to be different, and the reality is that it doesn’t always succeed, but it certainly gets kudos for going the extra mile.

“My blog got 6 million hits!”
“I could put up a video of me mixing cake batter with my boobs. And it will get eight million hits.”
“That’s been done already.”

You see Jamie and Dylan are actually quite likeable, and their slowly-evolving friendship / sexual friendship is a real treat to watch. Sure, the actual sex scenes may be a little too intimate for some viewers, and may teeter on the brink of being uncomfortable, but they are also refreshingly honest and, in some ways, the kind of things that some couples could take note of. These two talk themselves through everything that works and everything that doesn’t work, rather than hiding behind some kind of diplomatic veneer which could only end in frustration, and they are upfront about their feelings – things which might smack as being brutal even in a healthy relationship can be dished out guiltlessly in their open friendship.

Of course, this has been all done before – or so some may assume – since the other ‘friends with benefits’ comedy, No Strings Attached supposedly covered this same ground just a few months before the release of this film. Suffice to say that No Strings Attached is a disappointing, trite, clumsy and highly ineffective derivative romcom which deserves to be dumped in the same pile as all those aforementioned Aniston/Lopez/Parker duds. Worse still, the stars, Ashton Kutcher (has he ever actually acted in a film before?) and Natalie Portman (who followed up her Oscar-winning Black Swan performance with... this?) had absolutely zero chemistry. Whilst Timberlake and Kunis may not have the greatest on-screen chemistry (c.f. Clooney and Lopez in Out of Sight), they look positively made for each other when compared to Portman and Kutcher, and it’s a significant step up from Timberlake’s last pairing opposite Amanda Seyfried in In Time.

“Why do women think the only way to get a man to do what they want, is to manipulate them?”
“History. Personal experience. Romantic comedies.”

So whilst you might assume that this is going to be predictable, formulaic and clichéd – perhaps even more so if you’ve seen No Strings Attached – let me assure you that the filmmakers behind Friends with Benefits have gone out of their way to surprise you.

Of course Timberlake and Kunis really drive the movie; their chemistry may occasionally falter, but it is more than enough for them to be convincing as both best friends and involved partners, and it is significantly bolstered by some great comic timing and generally charming, affable performances from the two of them. Apparently they spent several weeks working on the script together before it was finalised (which writer/director Will “Easy A” Gluck says was written specifically for them in the first place), in order to enhance the dialogue between the two characters and make it flow more naturally. And you can actually see the direct result of this – where the words Timberlake spoke in his last movie, In Time, often felt like stilted, scripted dialogue, his contribution to Friends with Benefits feels almost improvisational by comparison: far more natural when coming from his lips.

Kunis has already shown her dramatic worth in Black Swan, and has proven her comedic abilities in films like Forgetting Sarah Marshall, and here, as Jamie, she manages to do “sexy professional” well, whilst also more than matching Timberlake’s Dylan in terms wittiness, and adding an extra layer of “damaged goods” into the mix, without wearing that last element like a badge (as is normal with these kinds of romcom fares).

They are ably supported by a host of solid actors in genuinely interesting character roles. Woody Harrelson (the Natural Born Killers star who pays a tribute to White Men Can’t Jump here and who I’m looking forward to in the upcoming cop drama Rampart) brings to life one of the first on-screen gay guys who is not massively camp – at least not in an overtly irritating, annoyingly exaggerated way – and is very convincing in the role; he plays one of Dylan’s new colleagues and actually offers some decent, true-to-life, advice for once. Jenna Elfman (Dharma & Greg) is very good as Dylan’s sister, also bringing the ‘honest big sister’ role to life with authentic sentiments. And Richard Jenkins (The Visitor, Six Feet Under) is superb as Dylan’s ageing dad, who has some genuinely serious issues which need to be dealt with as the story makes its transition into a more dramatic third act. Perhaps only Patricia Clarkson (The Untouchables, Shutter Island), as Jamie’s mother, grated on me – although that’s totally in-line with her character as she plays the most flaky mother-who-still-pretends-she’s-a-teenager in the world.

“You're emotionally unavailable?”
“Oh, yeah!”
“Oh, my God! I'm emotionally damaged. I haven't seen you at the meetings.”

Indeed it’s the supporting players – in particular the family members – who allow this film to go slightly beneath the surface when it comes to giving the lead characters some depth. Dylan may be a charming, funny, cool and happy guy but beneath that lightweight veneer he’s got his own share of real-life problems to deal with; Jamie may seem so assured and confident – a veritable positive female authoritarian role-model – but she too has her own unseen demons wrestling within her tough exterior; and the two of them get much more interesting when they slowly start to discover more about each other, and, in turn, we do too.

And even when the film starts treading familiar ground – as is inevitable in any romcom – it is handled more adeptly than you would expect, with the lead characters so wrapped up in concealing their own insecurities that they persistently reject the fairytale elements in their lives, despite being surrounded by them. Their cynicism reflects audiences’ cynicism after years of cheesy romcoms; yet, as the story progresses, little touches, integrated subtly into the proceedings (Jamie knows the lines to a terrible romance that they happen to watch), give you the hint that maybe these two aren’t quite as oblivious to the fairytale dream as they pretend to be. Whilst it won’t have you converted by the end of it, this slow-diffusion method of introducing classic romance elements – after having just poked fun at them – is actually quite effective.

Friends with Benefits is not a great romantic comedy (see Knocked Up if you want a benchmark), but it is a good one. It blends snappy, punchy comic beats with an honest, at times touching, study of friendships and relationships, further throwing in some well-observed dramatic undertones to add some weight to the proceedings. It’s well-balanced and very entertaining for the duration, and whilst it’s not standout in any specific way, the very fact that it is a more-than-decent romcom is something standout itself. If you get asked by your better half to pick this up as a rental for a date night, you’ll hopefully find it a pleasant surprise.