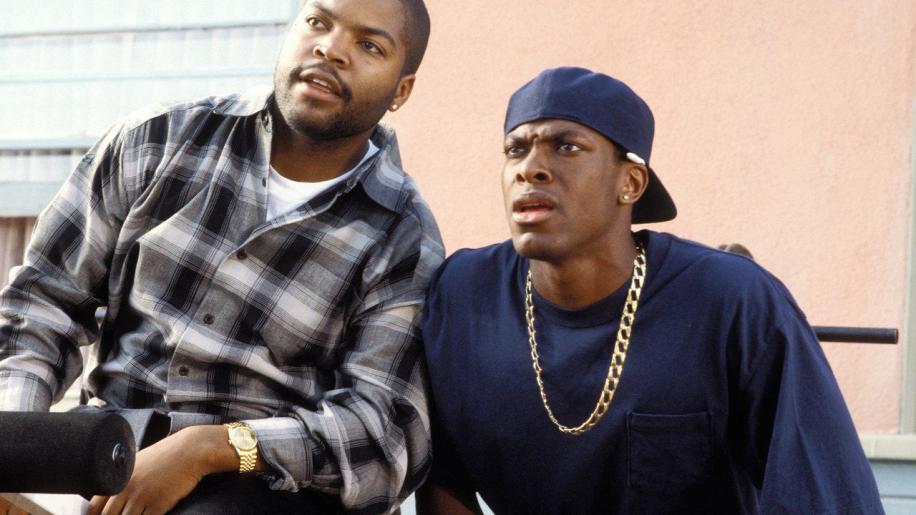 'Friday' was released in 1995 and was directed by an inexperienced director (at the time) named F.Gary Gray ('Be Cool'). This was in fact Gray's first ever feature presentation, with previous directorial experience gained solely through his work on rap music videos. With Gray's connections, it should come as no surprise that gangster rap superstar, Ice Cube, penned the script. DJ Pooh, who was a major rap producer at the time (and who later wrote Grand Theft Auto: San Andreas), co-wrote the script with long time collaborator Cube. Working with a budget of only $500, 000 and with only 20 days to complete the entire shoot, it's a miracle that this movie was made at all. Released two years after 'Menace to Society' and four years after 'Boyz n the Hood', this movie offers distinct comic relief to the more serious (and pioneering) black dramas which were available at the time.

The year is 1995 and it is summer time in a drug addled neighbourhood in South Central. To say that Craig is a dropout waster would be an understatement; the fact that this loser got fired from his job on his day off really says it all. All Craig wants to do is chill on his stoop and watch the world go by, uninterested in employment or making something of his life. His long suffering father tries to reason with him, enlightening his son as to the fact that he can't just eat chicken all day long and bring in no money. He preaches incessantly to Craig, emphasising that the house in which he lives needs to be treated with respect and also not to drink all the milk! Craig's skanky, ghetto girlfriend, Joi, who has 5” bright red nails, does nothing but exacerbate the situation. So with his parents and girlfriend constantly on his back, he's delighted when his old friend Smokey (a nickname gained from his fondness of the Mary Jane) makes an appearance. Looking to cheer his best friend up, he cajoles the anti-drugs Craig into smoking a doobie for the first time.

Being a pro smoker, the joint which the flamboyantly hyperactive Smoky rolls, contains chronic, which immediately cause Craig to start tripping. As the stone settles in the two observe the drama filled world of the 'hood from the comfort of their porch. The neighbourhood is filled with lowlifes and undesirables, such as the crackhead thief, Ezal or crackhead perpetual moocher, Felicia. There's also the monstrous Deebo, a school/ghetto bully of epic proportions who regularly beats up the neighbourhood's inhabitants and steals from them. Deebo also visits Craig and Smokey on a daily basis, liberating them from their meagre valuables, much to their chagrin and empty threats to whup the behemoth's ass. Things start to look up for Craig when he attracts the attention of local hottie, Debbie. But there's a major problem, all the weed which Smokey has been toking (and which he shared with Craig) doesn't belong to him. Enter Big Worm (or Big Perm as Smokey calls him!), local drug dealer and Smokey's “boss”. Accosting Smokey for his poor business acumen from the comfort of his pumpkin coloured low rider, he reveals his piece to show he means business. He informs the dismissive (and highly wasted) Smokey that unless he has his $200 by 10pm that there will be big trouble. With a fire lit under their asses, the hapless stoned duo must leave the refuge of their porch and try and acquire the drugs money by whatever means necessary. Ultimately Craig must make some decisions on whether or not he will take the easy way out or face up to his responsibilities like a man.

Due to the budgetary nature of the piece there isn't much scenic variation throughout. Basically the whole movie revolves around Smokey and Craig's interactions from the microcosm setting of the Jones' porch. You would think that this would be boring but it's not. The 'hood is filled with colourful and highly amusing characters that regularly drop in, cause mayhem and laughs, before carrying on about their business. For example, Pastor Clever drops by to preach to the boys and ends up asking for some of Smokey's cheeba, before heading off to see if he can have his wicked way with the sultry Miss. Parker. Mr. Jones' frequent tirades of instruction to his son on how to become a man, flavoured with his bowel movement obsession, add to the hilarity. The unwashed, crack-addicted Ezal and drug-dealing/ice-cream selling Big Worm, constantly harass Smokey and also have their moments to bring the house down. What this movie offers is lots of laughs loosely guided by an underlining drama; a formula made successful only because of the characters involved. The star of the show is Smokey, whose motor-mouth quick fire quips and put downs are some of the finest ever captured on film, and are also endlessly quotable. His antics are made even more amusing due to the fact that it's plausible that the bizarre scenarios featured could actually happen to a maniac such as Smokey. Yes it's crude, rude and sometimes silly but I still find this movie to be one of my all time favourites in this genre. I would describe this movie as a piece of rare comedy, where a lot of fledgling artists casually stumbled through the project to produce a comedic rarity that everyone should see at least once.

The ensemble cast certainly features some diamonds in the rough. Aside from Cube, who was already highly successful, Tucker has to be the success story from this cast. At the time he was relatively unknown but his portrayal of Smokey is simply one his best performances to date and has helped catapult him to superstardom. He has created a highly memorable character, whose non-stop tirades of abuse, rapid fire gesticulations and hyperactivity are only matched in intensity by his propensity for the weed. The strength of Tucker's performance is exemplified by the fact that his antics still feel fresh and funny after the umpteenth viewing. Cube is strong and does an admirable job playing the loser, Craig, even if he is blown off the screen by Tucker (who was ironically chosen to play Smokey by the former NWA rapper!). Cube's performance is completely out of character with his gat-wielding rap persona and it's a credit to his acting abilities (and commitment to his new profession) that he is convincing in this role. Witherspoon's performance is best described as cantankerous. He continually riles Craig in a highly amusing manner and forces his son to hold conversations with him as he “Drops the kids off at the pool”, all the while spraying the air furiously with air freshener! The late, great Bernie Mac also makes a brief but memorable appearance as Pastor Clever, chasing after the sultry Miss. Jones. In fact, it can be said that the majority of the cast perform well for the most part and are central to making the whole piece work, even if there are a few instances of ham due to inexperience. Look closely and you will also see Michael 'Green Mile' Duncan playing an extra!

Although this genre of film is somewhat similar to others, such as Kid N' Play's 'House Party' movies, 'Friday' added a raw edge and believability, which made the other previous attempts at black urban/gangster comedies look decidedly weak in comparison. I know that many consider Cheech and Chong to be the pioneers of black stoner comedy movies but their movies just don't have the wide appeal which this one has. This movie was undoubtedly targeted at black audiences but its excellent cast and cheeky charm attracted a much wider range of viewers and resultant worldwide recognition. It has to be said that Gray certainly has a distinct style and flair, which shines through in his movies. Every scene appears almost effortless in its execution and the entire piece flows incredibly well, with seemingly no forced inclusions to make the viewer feel uncomfortable. The manner in which Gray captures the interaction between Cube and Tucker is very naturalistic, placing the viewer right in the middle of their stoned haze of reality. The only aspect of the movie that has always seemed somewhat contrived to me are the anti-guns and (semi-)anti drugs messages that, while important, don't really “fit” as comfortably in the finished product as the rest of the content. The movie spawned two sequels that, while in their own way are enjoyable, never really match the quick wit and ready laughs of the original. In my opinion, this movie has often been copied but never equalled. For example, the sometimes hilarious but mostly stupid 'Don't Be a Menace to South Central While Drinking Your Juice in the Hood', was released only a year later but is not even in the same league as 'Friday'. If you haven't seen this movie, do yourself a favour and pick it up on Blu-ray as this is a highly enjoyable and engaging stoner comedy, which was the forerunner to 'Pineapple Express' amongst others. A lot can happen between Thursday and Saturday!


This BD release features the director's cut of the movie, which, to be honest, is really not that different from the theatrical version (and only runs a mere five minutes longer).