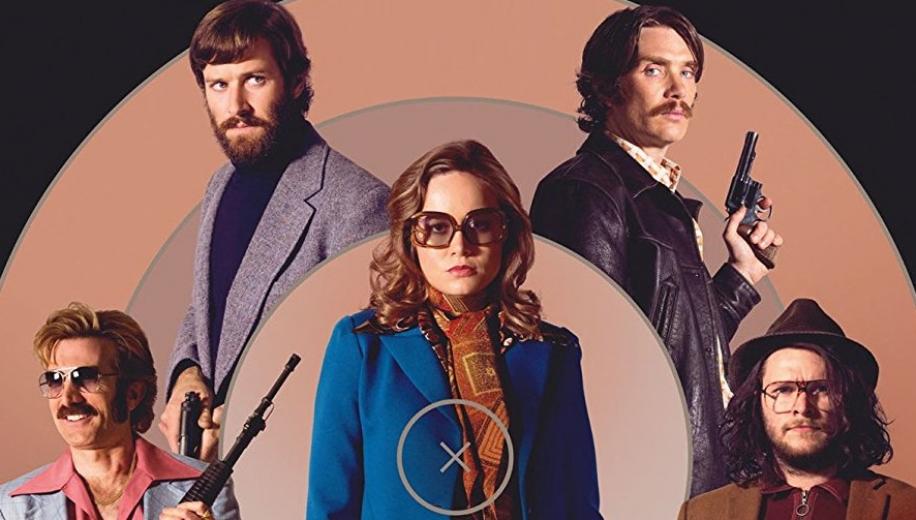 Filmmaker Ben Wheatley, after a succession of distinctive but hard-to-like features, has an absolute blast with Free Fire, his 70s Brit-flavoured Tarantino-esque shootout.

Despite having developed a cult following for his dark humour and unrestrained penchant for bouts of extreme violence and gore, Wheatley has done few - if any - films which are even palatable. For many, indeed, he's been riding the coattails of the memorable Kill List for nearly a decade, so Free Fire comes as a double-surprise. Not only is it a good movie, but it's actually a whole lot of fun. An all-star cast get together in a single location and spend an entire movie finding excuses to shoot each other. Repeatedly. And it works. Blending 70s throwback sensibilities, a bit of a Peckinpah inspired shootout vibe, and a Brit take on something you might have otherwise expected from Tarantino, Free Fire is an unabashed blast.
When a simple weapons sale goes wrong, a disparate group of buyers and dealers trade words and bullets in an abandoned warehouse, all of them intent on getting out alive, but none of them quite knowing how. With IRA members Cillian Murphy and Wheatley regular Michael Smiley leading the group after the guns, and Sharlto Copley and Armie Hammer selling them, and Brie Larson's intermediary caught between, Free Fire distinguishes itself with some great dialogue, memorable performances (Copley's so over the top even his South African accent seems fake, and Hammer has seldom been better than as a pot-smoking super-soldier) and surprisingly imaginative action. It's a lot more fun than it has any right to be.


A strong but far from perfect presentation

Detail is strong but still struggles with the often dim lighting conditions, fluctuating in terms of precision and clarity, but still providing a largely textured and sporadically nuanced focus upon characters and objects. It's a pleasing look, even if it doesn't stand up as particularly impressive, especially for a digitally-shot production, and it certainly suits the 70s setting, and the grungy vibe.

The colour scheme is dominated by yellow hues for the most part, which can affect skin tones and natural colours on show, but is again a (seemingly) intended style, also playing into the feel of the piece. Black levels do falter, and it's perhaps the other area where Free Fire shows a lacking, but overall it's a nice presentation, just one that isn't going to win any prizes.

The accompanying DTS-HD Master Audio 5.1 track is a frenzied affair, having almost as much of a blast as the movie itself, with an almost unceasing barrage of small arms fire ringing out in the echoing warehouse setting. Offering up consummate power and a fair amount of precision, the movie manages to punch well above its weight with this furious track.


The soundtrack is an intense, exciting offering

Dialogue comes hard and fast, and isn't always easily comprehensible, but that's little to do with its presence in the track, which affords prioritisation even when the gunfights erupt, and the score delivers some welcome background beats, occasionally dipping into curious comedy but, for the most part, thrumming to the same 70s-esque throwback beat as the rest of the affair.

It's the effects, though, that really stand out, distinguishing between each and every individual weapon; the revolvers and automatics; the thunderous magnum and bursts of fire from the assault rifles. Bullets whizz out all around you and punch brickwork from your living room, echoing in the claustrophobic setting and tearing chunks out of the various characters. Explosions ring out, fire sweeps across the stage, and the LFE channel is always ready for action. It's an intense, engulfing offering.

Solid video, superb audio, and a solid selection of extras.

Studiocanal's Region B-locked UK Blu-ray release of Free Fire not only boasts all the extras from the US release, but also a number of exclusive Interviews with the Cast and Crew members, bolstering the strong Audio Commentary from writer/director Ben Wheatley and stars Cillian Murphy and Jack Reynor and the limited 15 minute Making of Featurette, whose interview snippets are far from as comprehensive as those added to the UK disc. It's a solid selection. The Region B-locked UK Blu-ray release of Free Fire boasts solid video, strong audio and a decent selection of extras, and, perhaps more importantly, remains the kind of film that Wheatley fans and detractors alike should still consider checking out. It's a blast.