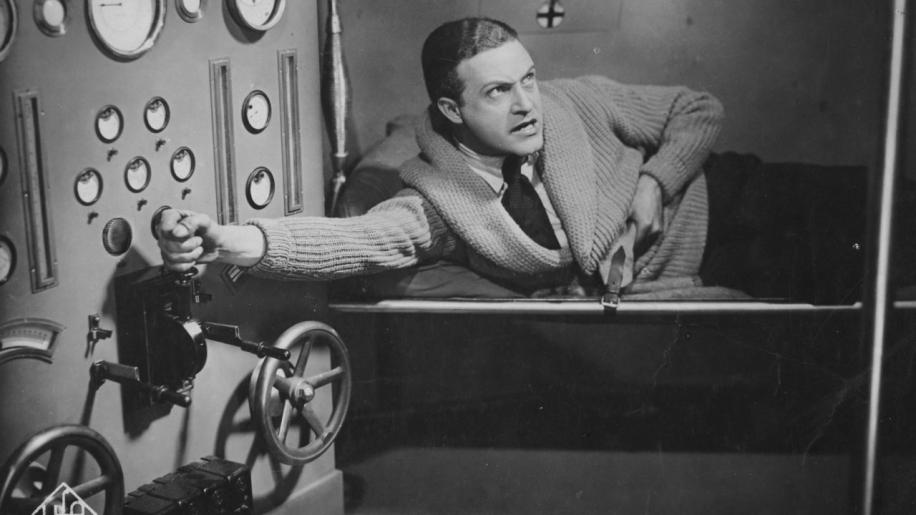 Made in 1929 before the advent of colour, Frau Im Mond is presented in its original Academy aspect ratio.

As I have said before when reviewing these Eureka Masters Of Cinema discs, I find it hard to pass judgement on the picture quality. The restoration work is phenomenal. Bear in mind that this version of the film was spliced together from the bits and pieces that have survived, then the picture quality is nothing short of remarkable.

Blacks are solid and whites are spot on. There are several thousand shades of grey in between and, providing your viewing device is calibrated correctly, you'll see them all.
There are of course crackles and marks on the print, but hopefully I'll be in as good as condition as this when I'm 79... As it was made in the days before colour, it was actually made two years after what is regarded as the first “talkie”, (The Jazz Singer, starring Al Jolson). Whereas Alan Croslands classic came from the mega rich Warner Brothers studio in Hollywood, Lang's effort couldn't even stretch the budget to a full sized working rocket...! Sound would follow shortly as this was actually Fritz Langs last silent film.

What we do have in the way of sound is a Dolby Digital 2.0 piano accompaniment that keeps up well with the action onscreen. It is a ride back to the day when pianists used to play along to everything from the main feature to the newsreels and will keep film historians happy. It's clear and well spread across the front channels and is obviously a new recording. The finished article will come with a 36-page booklet that details this movie plus more of Fritz Langs work. Unfortunately, this was not made available to me for this review so I can't comment. However, what we do have is:
The First Scientific Science-Fiction Film - a German documentary about Frau Im Mond made by Gabriele Jacobi (15:00). It's actually a very informative piece that has a comparison with the launch of the rocket in this film and the launch of Apollo 11 in 1969. You may be as surprised as I was but it does back up my claim about nearly changing the world...

The documentary is presented in it's original German language with English subtitles. The subs are clear and easy to read and keep up with the action onscreen perfectly.
The extras package is a bit thin on the ground but in all honesty, as is becoming the norm with these Eureka discs, the documentary is worth the price of the disc on its own I said at the end of my last review of a Eureka disc that they are rapidly gaining a reputation in the DVD world as the British Criterion collection. Their Masters Of Cinema Collection contains some fantastic cinematic history that will now be available for several generations to enjoy. I will always look out for these films to review, as it's a pleasure and not a chore (as most reviews are anyway...)

In this, Lang's final silent epic, the legendary filmmaker spins a tale involving a wicked cartel of spies who co-opt an experimental mission to the moon in the hope of plundering the satellite's vast (and highly theoretical) stores of gold. When the crew, helmed by Willy Fritsch and Gerda Maurus (both of whom had previously starred in Lang's Spione), finally reach their impossible destination, they find themselves stranded in a lunar labyrinth without walls — where emotions run scattershot, and the new goal becomes survival.
A modern Daedalus tale which uncannily foretold Germany's wartime push into rocket-science, Frau Im Mond is as much a warning-sign against human hubris as it is a hopeful depiction of mankind's potential.

Frau Im Mond is now added to that ever-growing collection and I whole-heartedly reccomend that lovers of film run out and grab a copy today.