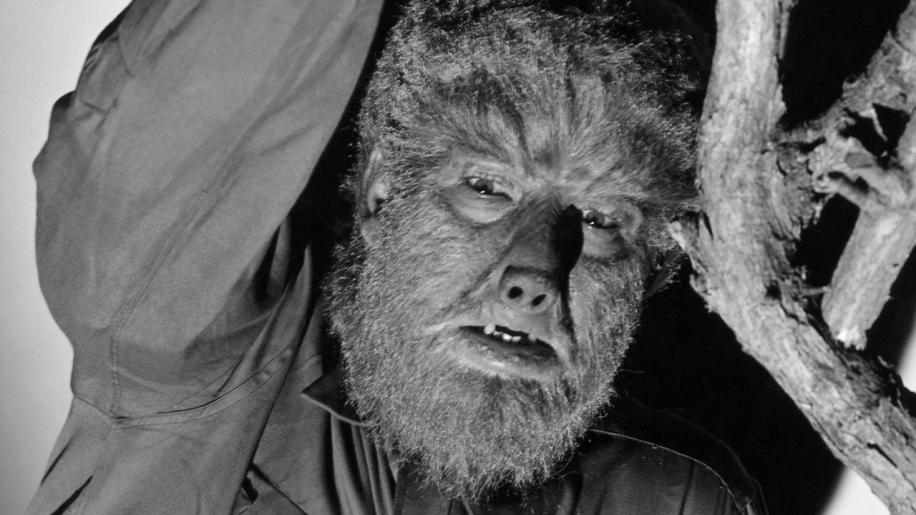 Surprisingly, FMTWM does not look quite as good, overall, and is not as consistent as the original The Wolf Man's transfer. There are many more lines, pops, speckles and dirt afflicting the image. Some of the wavering vertical lines reach out a lot further and the picture seems a tad more contrast-afflicted with some faces and torches and lanterns blooming more brightly. Scene transitions can suffer from fades, contrast-jumps and a few judders. But don't despair because the transfer still pays dividends with regards to clarity and definition. The foliage - those sneaky branches and wind-rustled bushes - still look great, the detail in the frigid underground cave is stark and clear, with a nice degree of shadings on the ice-encrusted objects, and the detail found within the village and the gypsy encampment are amply rewarding. The brickwork behind the Wolf Man as he marauds his way around backstreet Cardiff is quite well-delineated, too.

Blacks have a degree of stability and, although not the strongest around, manage to maintain some effective shadow-work throughout. The scene of the copper getting attacked has nice heavy darkness draped across some of the image and the fake woods, once again, provide evocative use of light and shade. All things considered, this is not a bad effort for a print that has obviously seen some wear and tear over the years. The restored sound is presented in Dolby Digital 2-channel mono and, although clear and discernable enough, still exhibits a few very noticeable pops and stammers. These are only one-offs as opposed to scene-afflicted serial drop-outs, though, so shouldn't really affect enjoyment too much. Dialogue is clear enough for the most part, though there are instances when speech dips a little and sounds slightly muffled. Again, this is nothing that would impair the listening experience too much.

As you would expect, high ends sound harsh and definitely have a struggle on their hands. But the score is presented well enough and there are some splendid snarling and growling from Chaney on the track, especially during that attack on the Welsh policeman. The big song and dance routine also comes over well ... unfortunately. The little effects for the wind and the rustling leaves during the prologue are slight but atmospheric, even if the landing of the stone lid from Larry's coffin sounds as if it carries all the weight of a paper bag. But, on the whole, this track is more than acceptable. Very poor this time out, folks. All we get is the original theatrical trailer and that's your lot, I'm afraid. Considering that this film was the first time that Universal thrust its horror cash-cows together and this would become something of a major trend in the years to come, the lack of some reminiscence and retrospective is slightly disappointing. Tom Weaver and various other historians have lent their vocals to other vintage fare and this one could have benefited enormously from some analysis and dissection. Ok, so the film really only garners a 6 out of 10 - and many would claim that even this score is being overly lenient - but there is still much of worth in this addition to Universal's horror canon. Production values are high and the film is packed with incident. The werewolf side of things is definitely the most impressive and Chaney makes the most out of a character who wants nothing other than to die. Lugosi's Monster is, inevitably, a letdown considering the great big boots he is trying to fill, but it is strange how easily you can warm to his crumpled-down version of the Karloff's icon, even if he is a relative guest star in the picture. So, two stories go into the mix, but only one has any real relevance, ensuring that this remains markedly a Wolf Man picture first and foremost. Still, the production showed some shrewd initiative by hurling two of Universal's greatest horror archetypes together. The fact that they kept on marketing such monster-mashes for years to come - of considerably lesser value - proved that they knew they'd found a cool idea to begin with but lacked the writing skills and imaginative panache to pull them off, the series ending up as a mere parody of former self. Nevertheless, FMTWM is indispensable in the continuation of Larry Talbot's plight.

This edition sits very snugly on the same disc as the original, with a nice enough transfer for a film of this vintage. A commentary would have been nice to put some historical relevance across and to provide some insight into Bela Lugosi's clod-hopping segue into the role made famous by his arch-rival, Boris Karoff, but sadly this is not to be.