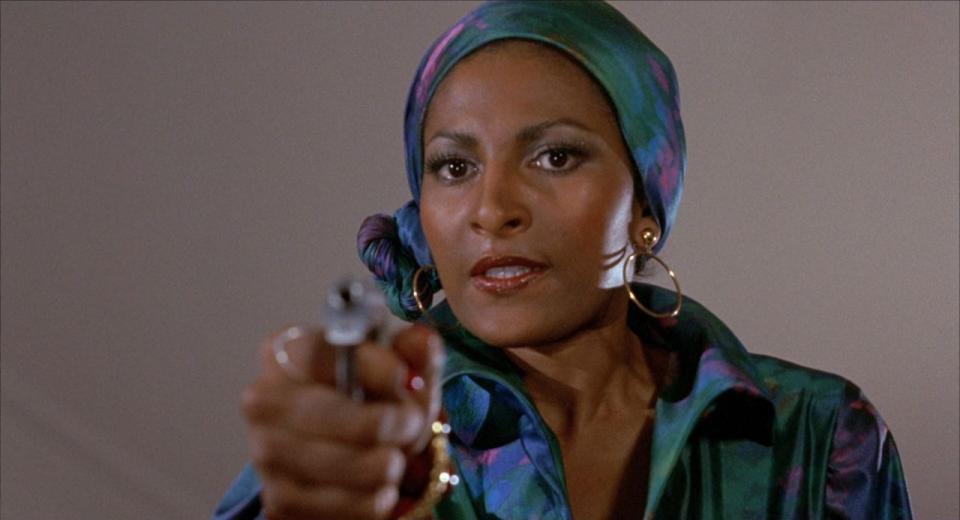 Foxy Brown hits UK Region B-locked Blu-ray with a faithful but understandably flawed 1080p/AVC High Definition video presentation courtesy of the generally reliable Arrow, in the movie’s original theatrical aspect ratio of 1.85:1 widescreen. Taking into account the fact that this is a older film, and that they probably haven’t produced a new master for this release, the presentation falls into all the usual pitfalls but still manages to render the feature in a pleasing fashion. Detail is good – far from great, but still good; with some fine object detail on offer, obviously variable from scene to scene. So too is grain, which varies and never feels quite as stable as you might have hoped for – some shots definitely looking considerably worse than others. The flipside, of course, is that the prominent grain would imply that there hasn’t been too much DNR applied, nor any overt edge enhancement, leading to an authentic, faithful rendition which does not attempt to bury the flaws under rampant digital clean-up. The colour scheme – which is as varied as Foxy’s attire – is rendered well, with some stronger tones, but an obvious limitation in the form of the commonplace matte pastels of the era. There’s still plenty of vibrant, vivid splashes thrown in, however. And skin tones look healthy and often gorgeous, as you would probably only expect from Grier’s Foxy herself. Black levels are reasonably strong but don’t showcase a huge amount of shadow detail – thankfully the night-set sequences are comparatively few and far between. With only a few outright obvious defects and print damage scattered throughout this is a largely competent but far from exceptional video presentation which may never elevate the feature to demo material but is still easily the best the film has ever looked. On the aural front the accompanying track also does a solid, again far from exceptional, job, rendering the already fairly restrained audio in a perfectly satisfactory fashion. Rather than elect for a manufactured DTS 5.1 track – as Arrow did to disappointing results for the likes of King of New York – here they have just stuck to the original 2.0 track which is far less prone to criticism. As a result we have a decent presentation which puts everything front and centre, and is dominated by dialogue more than anything else. The dialogue comes across clearly and coherently throughout, with effects sounding about as authentic as you would expect from this kind of era production – limited, somewhat muffled and eminently dated, with gunshots coming across as particularly old school. The soundtrack is far from as boisterous as you might have expected (c.f. Shaft), with only the closing title track really offering the kind of funky fun that may have worked well if better spread across the feature. Indeed large portions of the film go by completely devoid of any kind of musical scoring whatsoever. None of this prevents the track from being perfectly serviceable, but that certainly does not make it a ‘good’ offering, merely an acceptable one. It’s on the extras front where Arrow once again outdo themselves, providing a wealth of mostly new material which not only reveals welcome background into the main feature, but also sets the scene for the blaxploitation era within which is was borne.

Commentary
Director Jack Hill’s Audio Commentary kick-starts the offerings with a fond reflection on one of his most famous works, noting the superior preceding feature he did – Coffy – and the path to making a pseudo-sequel with a bigger budget and promotion. He talks about how difficult it was working within restrictive conditions and how he made some of the key sequences (including the airplane stunt). Previously available on the SE-DVD.

Documentaries
From Black and White to Blaxploitation is a fantastic newly-shot 20-minute feature that charts the history of Hill’s longtime collaborator Sid Haig, who has a fairly small cameo in Foxy Brown. The great thing about this Documentary is that it sets the scene for how Foxy Brown got made, with a look back at the string of exploitation and then Blaxploitation features that paved the way, and plenty of clips and production stills peppered throughout.

A Not So Minor Influence provides another new 20-minute interview-based Documentary, this time with stuntman Bob Minor, who talks about his work in the film industry, his collaborations with Jack Hill and his thoughts on Pam Grier.

Back to Black is a third new piece, with the legendary Fred Williamson (who, even if you don’t recognise him from his seminal features from the era, you might still remember from From Dusk Til Dawn) chatting about the Blaxploitation features from the period. Joined for the piece by fellow veterans Austin Stoker and Rosanne Katon, it’s Williamson who offers the most honest reflections, particularly when he notes how there was a choice between going down the Shaft route (where Richard Roundtree attempted to crack ‘white’ Hollywood, but ended up alienating his dedicated followers with atypical and arguably subservient roles like Man Friday) or sticking with his trademark tough guy persona but never really becoming well recognised in Hollywood terms. Well worth watching.

Promotional Material
Rounding off the disc we have a Photo Gallery of behind-the-scenes shots, publicity stills and lobby cards as well as a Trailer Reel that superbly boasts Trailers for all of the major works from Director Jack Hill, including the other Pam Grier features The Big Doll House, The Bird Cage and Coffy, as well as Foxy Brown itself. Excellent. The only thing we weren’t able to look at was the illustrated collector’s booklet - purportedly boasting some great mini-articles - but unfortunately it did not come with the PR disc, and, of course we missed out on the fantastic reversible artwork of the standard release and the excellent variation over on the Steelbook. I can hear fans salivating already. Where's my Coffy? The white Godfather of Blaxploitation (and exploitation) features, Jack Hill, returns with the same character, just under a different name. Unfortunately, though, the iconic Blaxploitation cult classic, Foxy Brown, fares worse when compared to its 70s counterparts - like the Shaft series or, on the other side of the spectrum, the Dirty Harry series - and really only endures because of Pam Grier’s prominent contributions; a prime example of her then-burgeoning rise as an indisputably potent sex symbol. Director Jack Hill does his best under restrictive conditions but there's no denying that his preceding collaboration with Grier, Coffy (for which Foxy Brown was written as a direct sequel, then changed at the last minute), is still a superior effort all-round, despite the fact that it is less well-known and less celebrated as a landmark Blaxploitation hit. Don’t expect much from Foxy beyond the rampant nudity, low budget scenery, variable acting, limited stunts and hit-and-miss action; it really is watchable only because of Grier, who certainly does make it a considerably more palatable experience.

On Region B-locked UK Blu-ray, Arrow Video’s release sports a faithful if unexceptional technical side – the video and audio are nothing more than acceptable – and should really be celebrated more for its stunning extras package, which takes the old Commentary track from the Director and adds in newly-minted Interview pieces that any fan of Blaxploitation movies from the era is going to want to own. If you fall into that category, this one comes recommend. What we really need now, though, is Coffy!