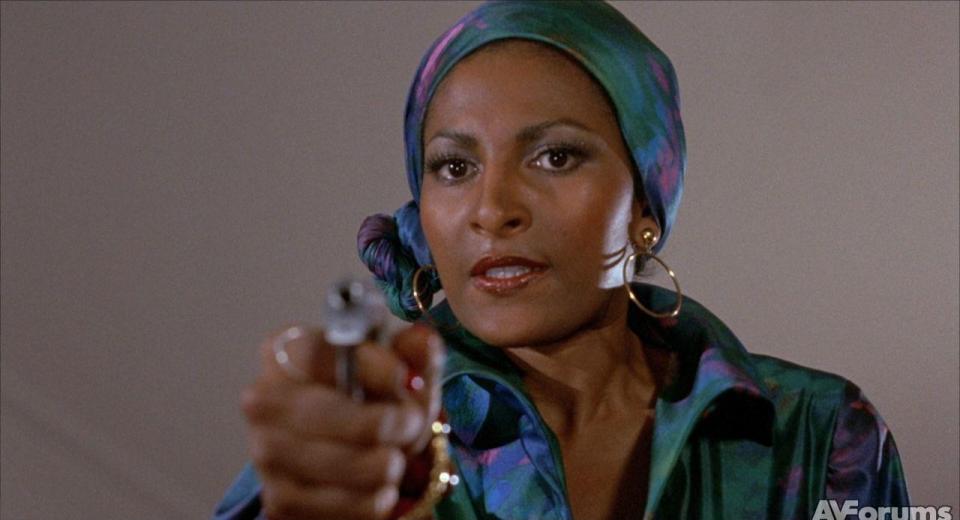 What, you mean there was a white Godfather of Blaxploitation?!

Many probably regard Melvin Van Peebles (Mario Van Peebles' father) as being the godfather of Blaxploitation movies, particularly those with political overtones. Ironically, director Jack Hill - who was not African-American - made arguably an even bigger impact with his seventies foray into the incongruously-titled (after all, who exactly was being exploited? Black actors populated these films in dominant roles where it was generally the White characters who were evil, and thus suffered painful deaths) sub-genre. He'd already made headways into the exploitation field with a series of women-in-prison features, two of which marked the debut of actress Pam Grier, and he would go on to bring her superstar status with his swing into Blaxploitation.

Although Grier will probably always be best remembered for 1974's Foxy Brown (or Tarantino's 1997 homage Jackie Brown), her landmark vehicle was actually Jack Hill's preceding 1973 flick Coffy, which was the first action film to put a black woman in the driving seat. Foxy Brown was originally intended to be a sequel to Coffy, and was written as such, operating under the working title of Burn, Coffy, Burn, but - despite the success of Coffy - the production studios (in their infinite wisdom) eventually stated that they did not want a sequel, and the script was changed at the last minute to remove most of the direct connections.

As a result we never quite know what Pam Grier's Foxy Brown does for a living (Coffy was a nurse). What we do know is that her brother, a weasely street dealer, is in trouble with a drug syndicate, and that - in order to get out of debt - he fingers Foxy's boyfriend as being an undercover DEA agent. Vowing revenge when he gets subsequently gunned down, Foxy insinuates herself into the syndicate's brothel posing as a prostitute, and attempts to take them down from within.

Ironically, despite being the more famous film, Jack Hill's pseudo-sequel to Coffy was the lesser of the two, telling a weaker story (which was no doubt hampered by the last minute studio interference) and featuring slightly less interesting performances from the cast - even Grier appeared to have taken a baby step backwards. Yet it will always be remembered in preference to Coffy, and Grier's action heroine has since been immortalised as a seventies icon.

Revisiting it after some forty years it is both easy to applaud the raw, fresh passion with which Hill and his fellow filmmakers took to the subject-matter, and revel in the pure no-holds-barred fun that everybody appeared to be having, whilst simultaneously laughing uncontrollably at the terribly wooden peripheral characters, the over-the-top hairstyles and outfits, and the hilarious, thinly-veiled reasons to get Grier naked. Made on a shoestring budget, the film is obviously a product of its time and its sub-genre - they were lucky to even get it made - but it doesn't really stand the test of time, even against its counterparts. Perhaps allowances have to be made – just like you’d make allowances for Helen Slater’s Supergirl when put up against Christopher Reeves’ seminal original Superman – but, even so, the likes of Melvin Van Peebles’ own Sweet Sweetback and, of course, the fantastic Shaft Trilogy, are simply leagues above this early female-driven blaxploitation feature (not to mention the ‘white’ counterparts like the classic Eastwood Dirty Harry series).

For Grier fans, of course Foxy Brown is probably in the top 3 of her must-have features; hell, for many it's probably number 1! There is certainly no denying that she proved, once and for all, that she had the attributes necessary to become both a strong leading lady and an undeniable sex symbol. Aside from her undeniably huge and tremendous... hair... she had plentiful assets with which to sell us upon her character, but it’s in her innate charisma that a star was truly born – she captivated with more than just physicality, although that was certainly not in question. Indeed it’s a shame that, beyond the blaxploitation sphere, Grier never really established herself as a mainstream player – the eighties saw her biggest profile work being merely playing second fiddle in movies that were arguably far below her talents (few will remember, but she actually played Steven Seagal’s cop partner in his surprisingly competent debut feature Nico: Above the Law). Tarantino’s tribute to her, and to these such films – Jackie Brown – could easily be considered a contender for her widest-reaching role and even that was arguably not definitively mainstream.

I’m sure many of Grier’s fans would echo the sentiment that they did not get to see enough of her (although, literally, they did) back in her ‘heyday’, and, for them, Foxy Brown remains a must-have addition to their collection. For everybody else, it’s a welcome little throwaway 70s blaxploitation flick; very much a product of its time and of the limited resources available, and probably best served by a double-bill viewing alongside the marginally superior Coffy. Now if only they could get around to releasing that too...