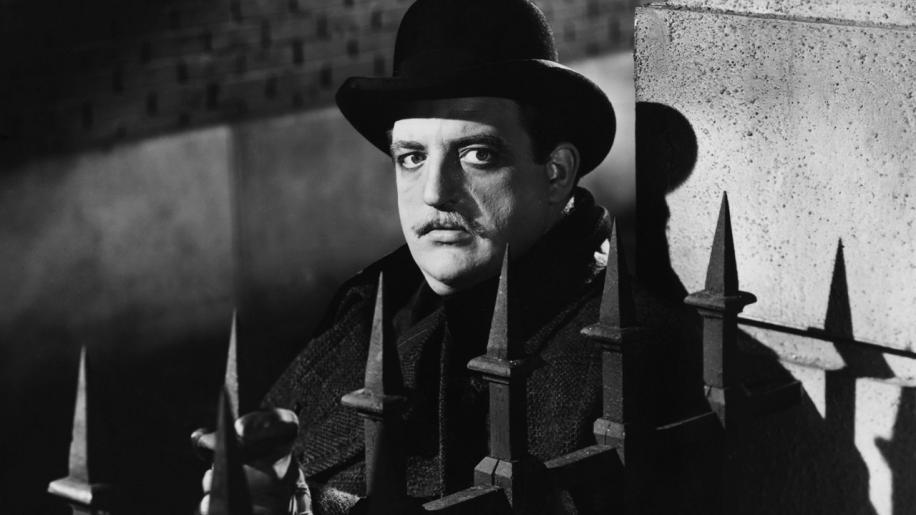 All three films have benefited from some restoration work, a visual comparison of which can be viewed in the special features, and they have, indeed, come up looking mighty fine for material dating from the forties. Naturally, the process has not worked miracles and each film still carries multiple nicks and scratches, dirt and that tremulous contrast wavering that denotes scene transitions, but the when everything is taken into consideration, the visual age of the prints only adds to their unique atmosphere.

Curiously, the oldest film - The Undying Monster - is the best looking one, featuring a cleaner, sharper transfer and marvellous contrast, whilst the most recent - Hangover Square - actually fares the worst, with some vague edge enhancement, a couple of recurring lines and more actual wear and tear than the other two films put together. But, and this is the crucial thing, all three entries are still eminently watchable and betray nothing at all that would impair enjoyment of them. Contrast, for the most part, is well maintained, with whites that don't glare and blacks that remain deep and untroubled by grey. Murky London streets retain detail, close-ups of faces, costumes and set-designs all yield rewards upon inspection and the wind-lashed moors and cliffs of the Hammond's secluded retreat in The Undying Monster look terrific.

Scene transitions, as is so often the case with vintage movies can wobble and do the contrast-shimmy but these are only minute occurrences that last only for fleeting seconds. Grain is minimal, although all three films contain individual sequences that are grainier than others and there are no instances of excessive noise or artefacting, meaning that the images are, collectively, smooth and satisfyingly film-like.

Overall, I was quite impressed with these transfers. Fox have given us a choice of the original mono track or a slightly widened stereo mix taken from it for each of the three movies. And, although there are no glaring errors with either of them, the best option is definitely up to the listener, as both come over well and keep the atmosphere going with aplomb.

With allowances for the age of the material, I think you would find little to complain about with the acoustic treatment of any of the three, but, if pushed, I would say that Hangover Square suffers possibly the most. As with its visual transfer, the more recent film has one or two areas that are worth mentioning - there is a slight dislocation of the voices and effects during a couple of scenes. Nothing to worry about really, as the audio for the film is, otherwise, of a high standard, easily showcasing the quality and depth of Herrmann's fantastic score, which swirls and pounds with effortless and authentic weight and movement around the limited soundscape.

Each film has no problems reproducing the dialogue or the ambience of a set, either - be it theatre-hall, tavern, city street or moonlit moor. The sound of the crowd during the bonfire sequence of Hangover Square is immersive and effectively detailed, the stereo track bringing with it more dynamism, range and spatial spread. In fact, the soundscape with the stereo mix is often thrown out quite convincingly, adding more detail and nuance to the activities depicted on the screen. The same goes for the final pursuit of the werewolf in Undying Monster and of Dr. Slade in The Lodger. But remember, these are old films that are not going to sound anywhere near as effective as a more modern feature boasting a richer, more detailed design.

Reassuringly, there is very little in the way of damage to the tracks, with drop-out, hiss or distortion having been really cleaned up. Personally, I listened to the stereo mixes, which I found to be respectful to the original mono tracks but managing to add that little bit extra without sounding bogus or enhanced. Well, as mentioned earlier, two films receive a short restoration comparison feature, which is just a series of sequences in a before-and-after sort of fashion. The scenes play continuously and have a line bisecting them in a split-screen effect. To be totally honest, even though the benefits of the restoration can be easily seen in the finished films themselves, when you look at the selection of scenes on offer, it is actually a lot harder to see the difference between the two. Still, it is nice that Fox have seen fit to place this feature on the discs.

Two of the films feature audio commentaries. In the case of The Lodger, we are in the company of film historians Alain Silver and James Ursini, who provide some great anecdote and background to the production and deliver a nice overview of Brahm's style and the ubiquitous resumes of the cast. For Hangover Square, we get to hear from film historian and filmmaker (Dracula: Dead And Loving It) Steve Haberman (who gets to feature on an awful lot of vintage genre movie DVDs, these days) and star of the film, Faye Marlowe. Sadly, Haberman insists on reading out George Sanders' suicide note - something that we really didn't need to hear and Marlowe is a little quiet and oddly reticent when it comes to her intense co-star. There is also another commentary for the movie, this time featuring critic and writer Richard Schickel, who provides a nicely opinionated and knowledgeable spiel about the movie, the cast, their director and the lasting influence that this relatively little-known psychodrama has had behind the scenes.

The Undying Monster also carries the featurette Concertos Macabre: The Films Of John Brahm (15 mins) which is a nice, fact-packed and informative overview of the German filmmaker's career and how he came to Fox. The Lodger has the reasonable retrospective that looks back at the making of the film in Man In The Fog: The Making Of The Lodger (15 mins), which takes in Brahm's incredible eye for detail and the intensity of his leading man.

Hangover Square has a decent little documentary, entitled The Tragic Mask: The Laird Cregar Story (20 mins), that finally takes a respectful look at the career and the life of troubled and tormented actor, ably informing us of the tragic loss that his death dealt to Hollywood. His veiled sexuality and hatred for his physical size and shape are chronicled with tact and sympathy and this is an effective snapshot into someone they all agree could have become one of the all-time greats.

All of these mini-docs feature the usual roster of participants to vintage genre fare - Haberman and Kim Newman perhaps linked umbilically to these releases as they crop in every single one - and the results are good, although still left me wanting more.

Each disc also features a decent Stills Gallery. But the really cool additions are found in the form of two vintage radio plays that accompany The Lodger and Hangover Square. Both feature Vincent Price standing in for Laird Cregar in his killer roles and the match is almost perfect and the presentations cosily creepy once you get past the seemingly endless advertising spiel at the start of either of them. The one for Hangover Square even features Linda Darnell and Faye Marlowe from the film, as well.

And not only do we have all these extras, but there is also a cool little illustrated booklet offering plot, cast and production details for each of the movies as well as few anecdotes and critical assessments, and, unannounced, were a couple of postcard stills from Hangover Square. I've heard that different copies have different stills to be found inside them. Nice.

So, ultimately, this is a pretty decent collection of bonus materials that certainly goes some way to expanding on the background of these neglected gems. In fact, considering how long these titles have been “off the map” it is surprising how much effort has been put into the overall package. Hats off to Fox, then! This boxset is much more than a tremendous homage to the cosy-chillers of yesteryear, it is a time-capsule that returns you to an era when the horror genre still clung to period thrills and atmospherics. The sci-fi and creature-feature boom was just around the corner, but Fox played a blinder with this triumvirate of terrors and secured themselves a lasting niche on the influential shelves of vintage macabre. Whilst The Undying Monster is largely playful and rammed full of verbal intrigue and entertaining detective work, The Lodger and Hangover Square are powerfully told psychological horrors. Laird Cregar is dazzling in his roles in both of them and it is immensely sad that he never lived to capitalise on the success of his obvious talents. All three films represent the eerie finesse of John Brahm and are all perfect for a creepy night in.

The transfers for all three are restored, though still show the inevitable creak and strain here and there. The commentaries are well rounded and informative and the featurettes add insightful and nostalgic value. A wonderful contribution to the set is the original radio plays for The Lodger and Hangover Square, featuring Vincent Price. As a life-long fan of his, it is wonderful to hear these.

So, all in all, this is an excellent package boasting terrific movies and that delicious frisson of the moody, black and white aesthetic of light and shadow. Highly recommended.