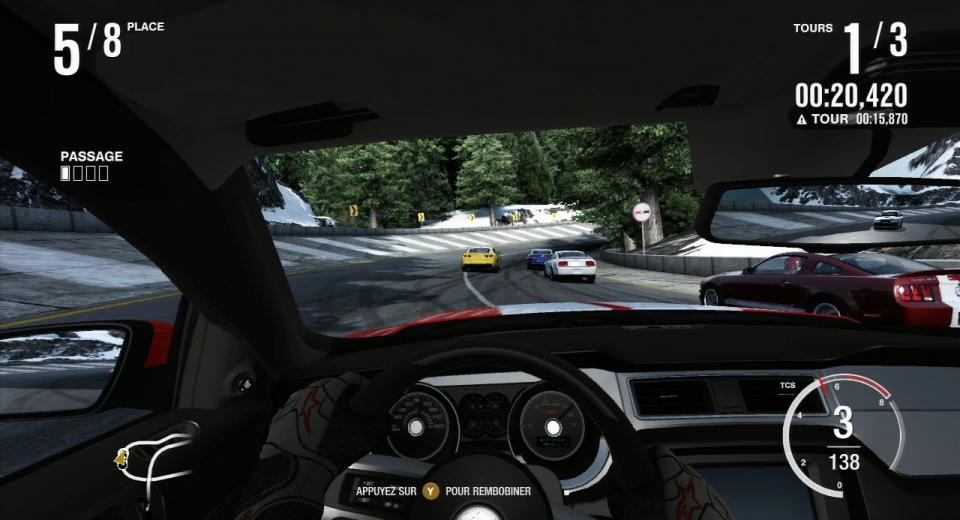 The gaming world has moved on since the Xbox first launched and many developers fail to keep up with the evolving market. This is not the case for Forza developer Turn 10 studios though who have remained with the times and regularly delivered their winning racing formula on both original Xbox and 360.

With a rival in Gran Turismo 5 though, they have a larger task than usual this year and must deliver a unique twist on their existing mechanics. Microsoft have backed their product all the way too, giving it as much publicity pre and post release, so surely there must be something to shout home about. Is Forza 4 much more than a noisy neighbour then?

Those who haven’t followed Forza 4 through development will probably get a shock when they load up a new career mode; the last thing they will be expecting is an intro by Jeremy Clarkson. Yes, Turn 10 have struck a deal with the BBC programme and have included Clarkson (who provides vocals in certain areas) along with a series of challenges to break up the race season which, of course, take place on the Top Gear test track. So, without even half an hour played, there’s one new feature thrown at you which I must say works very well and does add to the overall experience, more so than just having the test track to race round like on GT5.

On a more serious note though, the screens that are played through the intro look sublime. You might just have to pick your jaw up from the ground when you see some of the detail that has gone into the models and the environments surrounding them. Now by this point, some will be drawing comparison to GT5 and rightly so because at the end of the day, they’re both in the same genre and are direct rivals. But whilst Forza moves up some places on the grid when it comes to graphical quality, Gran Turismo still edges to first place on that front. Given how long it was in development for, this is hardly surprising.

As a leap off point, you are treated to one lap of an Alpine circuit in a supercar which promises much for the later stages of the game. But when you wade into the career, things slow down as you start off by racing lower spec vehicles such as hatchbacks and minis and you must work your way up the racing ladder until you can get behind the wheel of more exotic motors. The career mode does move a bit slowly, only moving up car classes as and when you invest in bigger and better cars and many players won’t realise this to begin with. So if you have a huge stack of cash, then there’s probably a reason for this.

What this reduction in pace does do though is allow you to adapt to how the cars work and how to get the best out of what you have got in front of you. Tuning isn’t very broad in lower class cars (with many small adjustments putting cars up a class) but this pushes you early on to rely on your driving ability when racing similarly powered cars as opposed to beating them off the line with added power.

The race season usually consists of 12 races across the world and also giving the player chances to compete in a series of challenges, including the aforementioned Top Gear inspired tests, which break up the season nicely. Challenges range from knocking down skittles to overtaking a set amount of vehicles under distance constraints. To many they will prove to be nothing more than a gimmick, but to the majority they will break up what could be a repetitive formula.

In the initial stages of the game, you will find that some of the cars handle like dogs, which is to be expected, but the higher powered vehicles really allow you to push the boundaries when it comes to cornering at speed and leaving your braking till the last minute. All cars feel finely balanced and handle like you want them to and rarely kick out their back end unless you really throw them into a tight bend.

It’s unlikely that you will be throwing your car into corners too hard given that you are constantly graded throughout your races. For instance, you will be marked out of four when you corner, overtake, max your speedo and draft your opponents. Whilst not getting directly awarded for this, you do get achievements early on for nailing each discipline and you also unlock accolades to show off to your friends and rivals online.

This is one thing that Forza constantly pushes you to partake in; social interaction. Be it through joining a racing club where you can share cars and arrange races, linking your Facebook account with the game or simply messing around with your racing card (your own personal race profile) you just can’t get away from it all. In a similar fashion to Call of Duty, you will always want the best accolades that you can taunt your friends with.

One thing that you will notice throughout your racing career is the damage mechanic and how your car throughout a race. If you were being over critical, you could say that your car often becomes damaged far too easily when you trade a glancing blow with another driver but as long as you don’t go ploughing into the back of an opponent, you won’t find it ruins the race other than reducing your winnings depending on the severity.

Ruining your car or misjudging a corner can be something that you’re never afraid of given that a cheeky ‘rewind’ feature has been implemented this time around. Yes, you can turn it off but with unlimited use and little punishment for doing so; many will use the system at free will to ensure they get the desired outcome instead of settling for second or third place. On one hand it makes the game accessible to a wider audience, but on the other it may damage the games serious racing image.

As a leading franchise for the console, it is only expected to see Kinect functionality with Forza 4. Fortunately, Turn 10 haven't over done it with motion-compatible features either so any worries over playing using the Kinect can be instantly disregarded as you never will play the game this way. Instead, you can navigate menus by gesturing at the camera, give it verbal commands as we’ve become accustomed to or you can even get it to track your head so you can see into upcoming corners. This can be a frustrating feature as more often than not you will forget you have it on and you’ll look away at something else and Kinect will happily oblige in following you.

Another neat feature that Kinect can be used for is ‘Autovista’ which allows you to analyse selected cars in detail. You can virtually walk round the car and open its doors, the boot and bonnet and even get inside and start it up - some cars even offer up a challenge for you to complete. Complementing the beautiful model is an array of technical data that is read out to you upon selection, be it from the game’s narrator or Clarkson, you are never short on data.

It’s obvious that the online multiplayer mode is where many players will find themselves spending most of their time and as expected it is all laid out for them perfectly ready for action. You can race one-on-one or in grid events to keep all types of adrenaline junkies happy and allow the winners to retain bragging rights.

So whilst Forza 4 may be behind Gran Turismo 5 when it comes to graphics quality, it more than makes up for it through its gameplay and enjoyment factor. Offering a whole host of details and analysis for many of their cars and a fine balance of tuning for the more serious racers out there, the majority of race fans will find a home here. Simply put, this is the best racing title available on Xbox 360 and you’d be mad not have it in your collection.

Microsoft deliver another killer exclusive for their console and Forza 4 is a title that will keep Gran Turismo 5 on its toes. Falling short of the graphical quality that its PS3 rival can offer, Turn 10 step up to the mark in otherareas by giving the player free roam of the cars they own and offering up a whole host of new features including Kinect functionality. Any racing fan must have this in their collection.