A sublime debut for Playground Games. 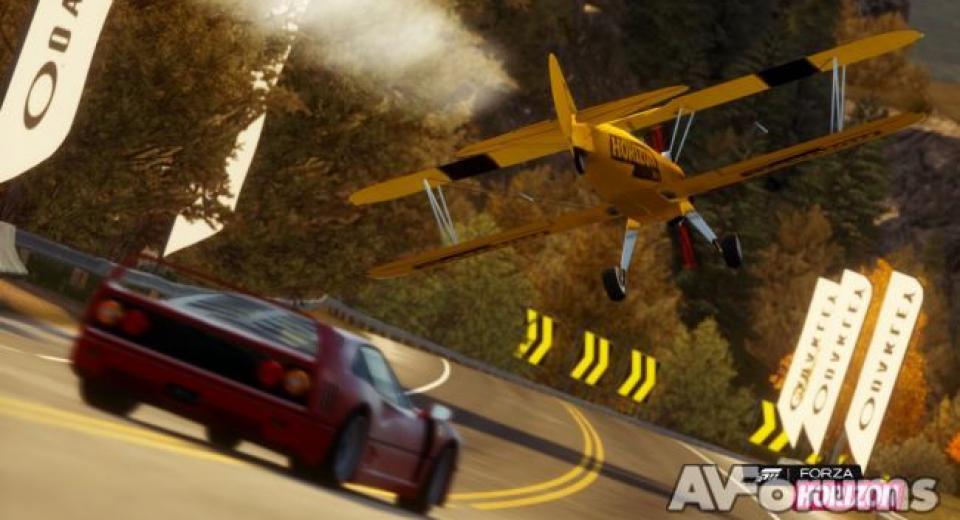 When they come to write the history of racing videogames, this generation of hardware will have a chapter larger and denser than any other. It’s difficult to to even know where to begin when recommending titles to friends; will they want the circuit-based precision and love of car pornography inherent to the likes of Forza 4 or Gran Turismo 5? Maybe the off-road slipperiness and festival atmosphere of a DiRT 3 or Motorstorm? Perhaps the open world of a Burnout Paradise or Need For Speed: Most Wanted, or the ultimate game of cops and robbers and point-to-point races in Hot Pursuit? Failing those, there are the beautiful, weather-beaten and long-forgotten city streets of Project Gotham Racing 4 to consider, along with myriad other arcade-based titles that balance neatly between full-on simulation and pick-up-and-play addiction.
As of October that process became slightly easier at least, with Forza Horizon wrapping up the best bits of nearly all the games mentioned above into an absolutely irresistible cocktail of slidey-racing bliss. It’s beautiful, varied, accessible for newcomers and/or as challenging as you want it to be, and it’s firmly plumbed into the car collection and customisation mechanics that gave Forza 3 & 4 so much personable appeal. Quite amazingly for the franchise, it’s also an entirely open-world game locked at a steady 30 rather than 60fps, and comes complete with a full day & night dynamic lighting cycle rather than the baked-in showroom sheen of previous iterations. Developed by British newcomers Playground Games (in conjunction with Turn 10), Horizon sets its stall out around a fictional motorsport festival centered in a condensed version of Colorado, USA. From the flashing lights, smoke, fireworks and bass-heavy tunes of that atmosphere spreads a network of roads covering desert, mountain and verdant farmland, with players encouraged to explore and discover landmarks, recover rusting wrecks from hidden barns, take spectacular photographs and race from point-to-point or around pre-set circuits in a traditional tiered event structure based on coloured festival wristbands.
Perhaps unsurprisingly for such a variety of terrain (off-roading is very much a feature), the selection of cars at your disposal has been clipped down to those that are suitable as general all-rounders, but there’s still a huge variety (from the likes of a 1960’s mini through to a modern-day Bugatti) with which to whittle down your available race winnings. Car clubs and the player-driven storefront also make welcome transitions from Forza 4, with designs freely available for creation or purchase from the auction house. In terms of the nuts and bolts, only the tuning setups appear to have been simplified for the arcade crowd, and they’re now stripped of any fine adjustment and automatically applied by a mechanic according to your desired performance class. Damage is limited to cosmetics only. So far, so Burnout: Paradise then, but Forza Horizon soon puts the comparisons to rest with a slew of innovations and a level of quality hitherto unseen within the open-world racing genre. There’s simply a mountain of content in here for diligent players, and racing around the landscape to each of the events is enjoyable in itself. Indeed it’s probably best to describe a typical play session rather than go into each of those one-by-one:
You’ll likely start with the map, choosing an event that you want to try, and setting a GPS nav point to make your way there (Microsoft SmartGlass support is incoming, for those of you with an iPad or tablet). As you race off into the sunset a rival car might pass you by, at which point you can challenge them to a quick point-to-point duel that may take you in a different direction entirely. As you blast your way past your opponent and weave through traffic you’ll earn yourself popularity points for completing near misses, sideswipes, drifts and high speeds, which boost your festival ranking and might unlock a new ‘showcase’ event in which you’ll get to race a biplane, hot air balloon, helicopter or some other contraption. Once you’ve beaten that pesky opponent you’ll earn yourself credits to put towards purchasing new cars and paint jobs, and checking the map again shows that you’re now in the vicinity of one of the many hidden barns, in which lie old rusting wrecks for your mechanic to collect and restore. Five minutes later you’ve found the old junk pile resting in its wooden home down a dimly-lit dirt path and you’ve picked up a new car with the credits you just earned, so it’s time to take it for a spin down to that undiscovered road you saw a half-mile back, knocking through a few discount auto signs along the way to gain yourself a monetary bonus when upgrading your vehicle.
Ah, but there’s a pretty waterfall along the way and the sun is just falling over the mountain; time for a quick pitstop to line up a shot in the fully-featured camera mode, and then a brief pause to upload that to the marketplace and create a whopping 20MB bitmap file to download from forzamotorsport.net (all screenshots on this page are in-game shots from my own career). Now, what was going on? Oh you’re right by a checkpoint, so you may as well complete the speed, photograph and skill PR challenges that will allow you to fast-travel back to this area for free later on in the game. Darn it, there’s a new wristband to collect, best head back to the festival and pick that up, maybe change out the car and pick up a new paint job.
Festival smoke and booming stage lights in your vision, it’s time to set that GPS point again and burn off into the night, but on the way you hit a speed camera that your Xbox Live friend has managed to record a monstrous score on. Ten minutes and a quick change of car later and you’ve beaten that, but your inbox is saying that there are another ten to reclaim, two of which are in this area. Oh dear. Maybe you can both do it in co-op free roam instead? Gain some extra credits and bump up the popularity ranks as you do so. A quick couple of point-to-point camera chases and you’re now both on the other side of the map, so maybe it’s time to jump into some competitive multiplayer and share a couple of vehicles in the car club? What time is it? What was it you wanted to do an hour ago? Oh right, a singleplayer circuit race. That’s the gist of a fairly typical session over the course of a couple of hours, and even though I’m now a full ten days into playing Forza Horizon, I’m only just beginning to scrape the end of the content on offer. The beauty of the structure that Playground has created is that all their challenges are only a few minutes long. Races are short and pacey, reaching a new destination or challenge takes a matter of minutes at most, and even as late-game content becomes naturally thin and strung out over the map, checkpoints allow you to warp to your chosen area and get into the thick of things in moments.
Of course all that content is for naught if Forza Horizon played like a dog, but it’s far from that end of the spectrum. Forza 4’s handling has made its way over intact, so with assists on or off, you’re getting one of the most pleasurably responsive racing simulations ever created - with a staggering range of individual ‘feel’ to each of the vehicles. That I’m constantly finding handling nuances and adapting to different vehicles is testament to the work that Turn 10 began all those years ago with the original game, and Forza Horizon showcases their work with one of the best-looking videogame landscapes yet created. The variety of scenery and utterly beguiling lighting makes you want to thoroughly explore both the world and roster of vehicles, finding the best combination to showcase both elements to their fullest.
As with pretty much every game released in 2012 however, there are those that might be put off by the litany of micro-transactions available to players looking to speed their way to the top or unlock exotic rides early in the game, but I can assure you that all such monetary benefits can be safely ignored. From the "treasure map" to the "popularity boost", none of them are essential to playing or finishing Forza Horizon, and indeed I had all but forgotten they existed before heading online to join the discussion. Tuning those menu options out of your vision is an easy thing to achieve, and something I suspect will come naturally for most players.

So is Forza Horizon a better open-world racer than Burnout Paradise? Undoubtedly. Is it a better circuit racer than PGR 4 or Gran Turismo 5? Yes, if you exclude the lack of weather conditions. Surely that'll make any next-generation sequel.
Playground’s initial offering was always building on something that was brilliant, but I suspect even they might not have realised the full extent to which Forza Horizon manages to improve on nearly every other racer out there. It’s deliciously beautiful to look at, it packs the subtlety of handling and rear-end heavy drifting of the Forza 4 engine into a traffic-filled set of online and offline challenges, and it ladles on its festival atmosphere with confidence and a defined personality that others have never quite managed to reach. It's a brilliant surprise leader then, in a field full of heavyweight challengers.