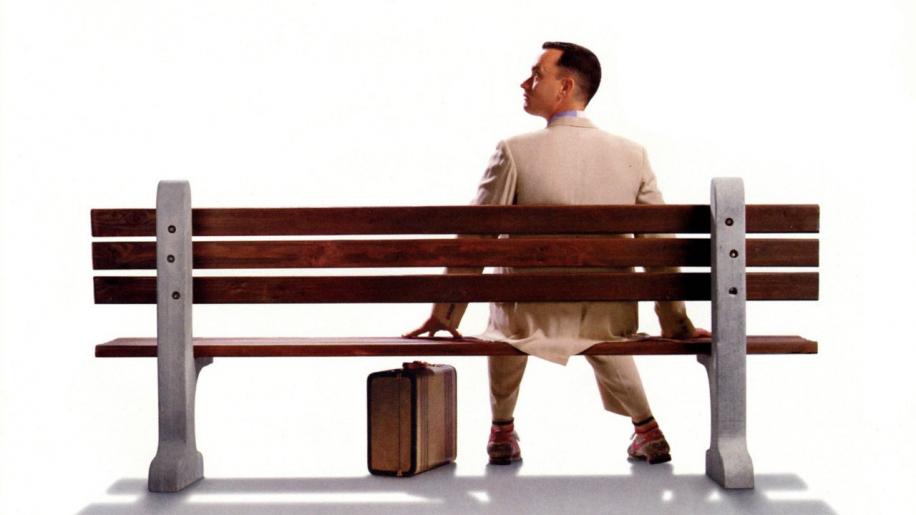 Based on a book written by Winston Groom in 1986, Forrest Gump was the undoubted hit movie of 1994. Starring Tom Hanks, Gary Sinise, Robin Wright and Sally Field, it follows the story of a below average intelligence man as he makes his way through life. The film makes use of real historical events, intertwined with the entirely fictional story. The headline quote did not appear in its shortened form in the book, but of course was extremely well known from the movie.

This Blu-ray release dates from 2009, and is in the AFI top 100 films of all time. It is our mission to review every film in this list and we thought it would make an interesting comparison to some more recent releases and to show how much the format has moved on in three short years.

Most will have seen the film, either on its original release or from one of the countless TV re-runs, but just in case you are not familiar with the story, here’s a brief synopsis. We start the story with a young Forrest about to start school. His mother is forced to make certain sacrifices to get him into the local public school, as his IQ is rated as just 75. She sleeps with the school principle and he agrees to take her son. Forrest suffers much bullying because he is forced to wear leg braces to fix his “weak” spine, but finds friendship in Jenny, a girl the same age who has a very abusive home life. The scene where Forrest boards the school bus for the first time is one of the iconic moments of the film and underlines the challenges that Forrest will face. Despite his low IQ, Forrest finds he excels at sports – namely running and American Football. This leads to a place at college on a sports scholarship and indirectly the first of three meetings with the President of the United States.

This first section establishes Hanks’s character as a slow, but not naïve or vulnerable individual. We learn not to pity him, but to simply share his triumphs. Situations that we would find embarrassing simply fly over Gump’s head, while he soon proves he is handy enough with his fists to sort out any physical threat. The lack of direction in Jenny’s life is also explored. We find her to be a very troubled young woman, adopting whatever fad or fashion is hot that week and unable to form lasting relationships. We understand from Gump’s mother that his father is “On vacation”. The inference is of course that he left home many years before. Certainly there is no relationship between Gump and his father mentioned within the story line.

The pace has been pretty sedate up until now. Dictated to a certain extend by Hank’s measured delivery (he actually adopted the accent of Michael Connor Humphries who plays young Forrest), we have plenty of time to understand the plot and learn about the characters. The next act however concerns Gump’s military career – set mainly in Vietnam and of course this requires a somewhat faster delivery. As Forrest’s main skill is doing exactly as he is told, he drops into military life perfectly. We see a repeat of the bus scene, where once again his almost childlike innocence marks him apart from the rest of the enlisted men. He is befriended by Bubba, an African American from the Deep South, who is also marginalised due to a facial disfigurement and an equally slow understanding of life. Like all soldiers in ‘Nam, Gump experiences his fair share of death and serious injury, including the loss of his friend, but also saves the life of a number of his platoon, including his commanding officer (Gary Sinise). Injured in the rescue attempt, Gump ends up in hospital and learns to play ping pong. He is also awarded the Medal of Honor and gets to meet his second & third presidents, indirectly causing the resignation of one of them. Jenny of course continues to self-destruct. Drawn towards violent, controlling men, she cannot return Forrest’s love and care for her.

The use of real historical characters and events including Watergate, Elvis and the Kennedy shooting, supported by songs from the era throughout the film makes for absorbing viewing and you do have to keep reminding yourself that it is a completely fictional story. The clever use of CGI to insert Hanks into various real scenes, along with re-voicing some of the archive audio is quite commonplace now, but required some serious CGI and motion camera moves that were quite cutting edge in the early 90s. Much of the action is set outdoors, with a wide variety of locations used in the Deep South, where the production crew based themselves for the 70 day shoot. Vietnam was re-created in a South Carolina swamp, with extra trees planted to add to the sub-tropical feel.

After Gump is discharged from the Army, his thoughts turn to shrimp. His dead soul mate Bubba dreamed of owning his own shrimp boat and employing Forrest as his first mate. Gump decides to follow Bubba’s wishes and buys his own boat. His ex CO, now an embittered crippled veteran had previously made a promise to Forrest that if he ever became a shrimp boat skipper he would come and crew for him. True to his word, he joins the boat and through the misfortune of being the only boat to survive a hurricane – by being out to sea and in the thick of it, they become the largest producer of shrimps in the bay. Nothing much has changed in Jenny’s life, but Forrest’s mother becomes ill and he returns home to nurse her thorough her final hours. Now wealthy through the combination of his fishing and some wise investments “In a fruit company called Apple”, Forrest settles back into his family home, mowing the football field and still holding a candle for Jenny. When she does return, it is yet again to hide from another abuse relationship. Forrest cannot understand why she keeps behaving as she does, but just accepts it. They end up sleeping together and then of course she is off again. Forrest covers his grief at her leaving by going for a run, to both oceans and back, twice!

The conclusion to the film witnesses the end of Jenny’s suffering in a thoroughly modern way, but not before she has introduced Forrest to his son, moved back into his home and married him. Despite the tragedy, it still manages to be a feel good ending to the film.

Nominated for thirteen Oscars and winning six including best actor (Hanks), this film also played to critical acclaim. Interestingly Hanks was third choice for the role, with both John Travolta and Bill Murray passing up the role. Travolta is reported to have said that it was “A mistake” to have turned the script down. The mixture of part fast paced action war movie, part love story and part historical drama remains an interesting combination, but it is the sheer strength and depth that Hanks brings to the role that really made the film. Hanks insisted on historical accuracy throughout the movie, but this did lead to allegations of political bias, something both the studio and Hanks himself strenuously denied. There was some controversy over the payment to Winston Groom – the writer of the original book. Through some dubious financial wranglings, he was denied his 3% of the film’s profits. By comparison, Hanks who did receive a cut of the takings reportedly pocketed over forty million dollars for his efforts while Groom had to settle for a paltry three hundred thousand or so.

With so many real locations, carefully created interior sets and all the technology Hollywood could throw at the movie, this film still stands up well today, almost twenty years since the cameras started rolling. Set more than twelve years before its release at its latest point, there is a certain timeless feel about the whole production and it has aged very little. As a relatively early Blu-ray transfer, it is not as good as some recently re-mastered and reissued films, so maybe the studio will treat us to a cleaned up or re-mastered release in time for its twentieth birthday. In the meantime, this is quite an acceptable package and a modern classic we all should own.