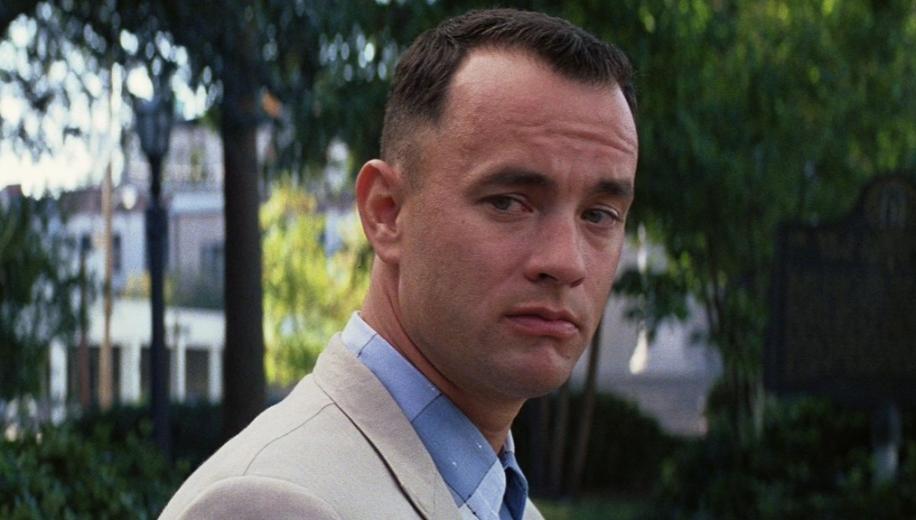 Forrest Gump polarises opinion. There are those that favour the film, revelling in its whimsy, captivated by the story and choked up by the fate of the characters. While others see it as nothing more than schmaltzy twaddle. Both opinions hold water. The film indeed has a kind of empathy; the softly spoken word as Forrest tells his story has a ‘grandfather regaling children’ bent, and those brought up with such tales can fall for the spell. Likewise it’s an impossible tale that relies on that empathy otherwise there’s simply no hook. As if to defy convention I sit somewhere in the middle having a mild like for it, while never falling for its tricks. But interestingly having not seen it for years, this time around the emotional bond between the characters seemed more relevant, which conversely meant I was aware of the cinematic tricks even more.

Directed by Robert Zemeckis with Tom Hanks as Forrest, they created a character that is instantly recognisable and eminently quotable. The plot is simple: a man regales his life story to people who sit next to him on a park bench; the story of his life is what makes the film remarkable. For this character, by any other measure is a simple man, with low intelligence but a good heart, he lives for his mother, his friends and his one love. And that, in essence is Forrest. The fact that through innocence he manages to have the most fortuitous luck granting him wealth beyond measure and accolades aplenty, none of it matters so long as he can cut grass and be with his Jenny - that is all the life he needs. A metaphor for the simple things in life, Forrest Gump is both touching and annoying at the same time. 
There are times when this transfer is amazing

The combination of the extra resolution, the wider colour range and the higher dynamic range bring out the very best the format has to offer; check out the final scenes, when Forrest is telling Jenny of his life, there are three flashbacks – looking up at the stars in Vietnam, the mirror lake in the mountains and the desert sunset – each of these images are stunning in their own right; the rich black level with the pinpoint stars piercing through, the postcard image of the mirrored lake, with its mountainous terrain stark against the sky line and the absolute definition of colours within the sunset, the reds, oranges and blues are something to behold.

A shame, then, that the rest of the image doesn’t quite live up to those dizzying heights.

Detail, for the most part, is spot on, skin texture and clothing weaves being very discernible (check out when Forrest leaves the TV studio and meets Lt. Dan). Landscape shots can be stunning, aside from those mentioned above, anywhere in Vietnam has clean edges as do the shrimping lakes. But there are times when the image softens to Blu-ray levels. Colouring can be amazing; the depth of colour to the army uniforms, or the jungle foliage of the napalm explosions, far more than the Blu-ray can ever hope to achieve.

Yet the black level can be too oppressive at times the worst culprit being during the Black Panther gathering where it was so dark as to start crushing and flattening the image. Other scenes fared much better and did help deepen the frame. The other end of the scale fared a little better without any significant clipping. The source is clean without any issues, there is a decent layer of grain that never intruded too much.

However, the increased resolution has highlighted some CG issues: the area around Lt Dan’s missing legs never seems quite right, and the crowd around the Washington monument look particularly cartoonish, as do some of the helicopters in Vietnam. But digitally there are no issues to contend with. The good far outweighs the bad with this image, though, and it is still superior to the Blu-ray. The English Dolby Atmos track doesn’t quite boost the effects to a new level; the majority of the track is confined to the surrounds with the overhead layer only really coming into significant effect during Vietnam. There are some decent enough subtle effects, however, the bases moving off to the left, the bird songs, the cheering crowd at the football games have some presence in the upper layer. Once we hit Vietnam things do come alive: helicopter blades, the ambush with the bullets shooting through the foliage, the overhead napalm destruction are really brought alive. The demonstration crowd at the Washington monument is quite immersive as is the hurricane on the shrimping boat. Bass is also quite limited, used to fill out the more bombastic scenes to good effect the sub is otherwise quite quiet and has little to do. Luckily the dialogue is clear and precise with no issues. The score makes good use of the surround field and all the speakers get a nice work out with the various cultural hits that pepper the track. UHD
Audio Commentary – With director Robert Zemeckis, producer Steve Starkey and production designer Rick Carter is very comprehensive and discusses much of the thoughts behind the film, its style, effects, casting, performances, humour and techniques.
Audio Commentary - With producer Wendy Finerman who gives a different slant on the film, from Forrest perspective before looking at some of the technical aspects; more of a general chat track.
Musical Signposts to History – After a brief introduction, the film can be watched in three ‘modes’ that when activated with stop the film and discuss that particular scene/music cue in particular.

Blu-ray 1
Same supplementary material as the UHD above

Blu-ray 2
Greenbow Diary – Twenty five minute making of feature looking at various sets with cast and crew interviews.
The Art of Screenplay Adaptation – Just less than 30 minutes, this feature discusses the monumental effort needed to make a book work on the screen in some detail.
Getting Past the Impossible: 'Forrest Gump' and the Visual Effects Revolution – Half hour feature that looks at the, at the time, ground breaking effects.
Little Forrest – 15 minutes with actor Michael Conner Humphreys, who was so good, he apparently Tom Hanks' performance.
An Evening with Forrest Gump – An hours feature with Tom Hanks, Gary Sinise, Eric Roth, and Robert Zemeckis on stage at the University of Southern California.
The Make-up of Forrest Gump – 8 minutes with make-up artist Dan Striepeke.
Through the Ears of Forrest Gump: Sound Design – Somewhat out of date due to implamentation of Atmos, but sound designer Randy Thom takes us through a number of scenes and how the sound was created.
Building the World of Gump: Production Design – Seven minutes looking at shooting locations and set design, production and implementation.
Seeing is Believing: The Visual Effects of Forrest Gump – Another effects piece this time with visual effects supervisor Ken Ralston, who takes us through the process of putting together several shots.
Screen Tests – For Michael Conner Humphreys, Hanna R. Hall, Robin Wright and Haley Joel Osment. Theatrical Trailers It is difficult to think of Forrest Gump without thinking about Dave Chappelle’s comments. And that opinion polarises moviegoers. For what is Forrest with his accolades, all heaped upon him by luck and fortune. But there are those who are captivated by the idea. A simple man regaling his life story to people on a park bench is so innocent, yet so frustrating as to split the populace. The film itself has its own accolades and continues to be lauded, yet it is still derided in equal measure. And that is cinematic genius: to still be debating a film 25 years later!

The 4K UHD set from Paramount is a pretty good package; the native 4K picture has some excellent moments, with standout colouring and deep blacks, it also has softer moments and crushed blacks. The Dolby Atmos track has some truly immersive scenes that really bring the surround scape to life, but there are elements that remain perfectly serviceable yet without the involvement. The extras package is huge and has just about everything you could ask for, but it’s all been seen before.