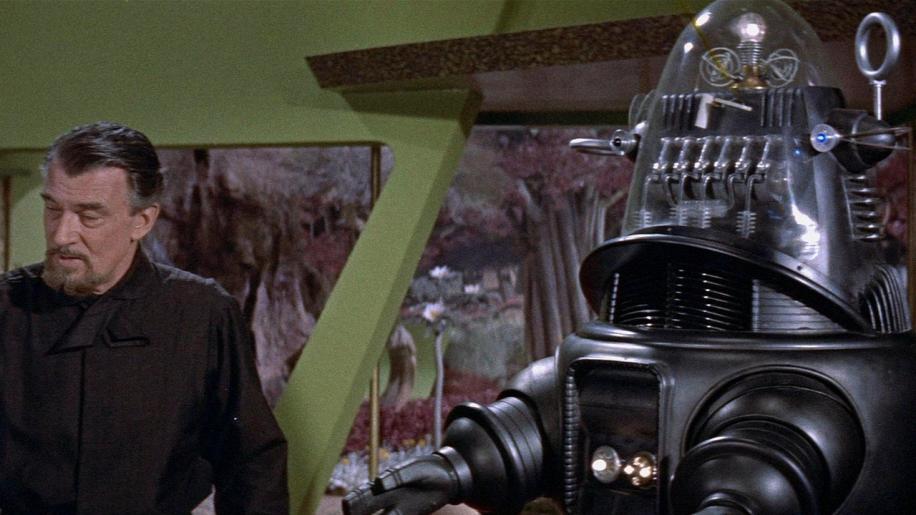 When we watch the latest Sci-Fi blockbuster, how many of us stop to think that a lot of the ideas on screen today originate in the 1950’s?

‘Forbidden Planet’, now out on UK Region free Blu-ray, is one of the Grand daddies of them all. Without this movie to pave the way, TV’s ‘Lost in Space’ might never have had its robot or maybe they would still have landed on their distant planet in a cigar shaped space ship rather than the saucer shaped Jupiter 2. Without the visual imagination of ‘Forbidden Planet’s designers, perhaps the crew of the Starship Enterprise would never have been beamed up by Scotty using the Transporter.
So Sci-Fi on TV and in the Cinema owes much to a movie that many consider corny today due to the rather chunky and clunky technology on display, but we forget that when it was released in 1956 this was how the future looked. Perhaps in 50 years time, we’ll look back at today’s cutting edge technology with all the nostalgia and fondness we currently reserve for a gas powered fridge.

‘Forbidden Planet’ was, as most movie buff’s know, based on Shakespeare’s ‘The Tempest’ and has the crew of the C-57D Spacecruiser landing on the planet Altair IV against the warnings of Professor Morbius (Walter Pidgeon). Morbius and his daughter, Alta (Anne Francis), are the only remaining human inhabitants of the planet as all others in their party have died under strange circumstances. Commander J.J.Adams (Leslie Nielsen) decides to investigate and unleashes a terrifying force that puts the lives of his crew in mortal danger.

The real star of the movie just has to be Robby the Robot, who has a prime directive to look after the humans and never harm them. He has many talents including running up several yards of material for a new dress for Alta or manufacturing 60 gallons of whisky overnight for the visiting spaceship’s cook ( played by Earl Holliman who will be familiar to fans of Angie Dickinson’s ‘Police Woman’ TV series). While on the subject of famous faces, another crew member is played by a young Richard Anderson who went on to star alongside Lee Majors in the long running ‘Six Million Dollar Man’ TV series.

In some places, the acting isn’t the biggest selling point of the movie – sounding, as it does occasionally, somewhat stilted and almost as if it’s being read. This seemed to be the style of many Sci-fi movies from the 50’s and it appeared that the injection of technology around the actors disabled their human emotion chip.
I genuinely feel an affection towards ‘Forbidden Planet’ as it was the forerunner of so many movies and TV series but seeing it now, 50 years on, it’s as if I have different eyes – almost in the same way that visiting your old school and finding that the place you thought was massive at the time, is actually a lot smaller. This in no way reduces the impact that ‘Forbidden Planet’ had on the genre in the 50’s and for many years thereafter but it shows how time and the development of technology can date a film.

Like many others, I also now have a problem with anything starring Leslie Nielsen in a serious role. If only he hadn’t done ‘Airplane’ or played walking disaster zone Frank Drebin in the 70’s and 80’s. It’s now very difficult to watch him without expecting a sight gag or a look to camera. The last time I watched ‘The Poseidon Adventure’, in which he briefly played the Captain, as the huge tidal wave approached the ship he said something like “Oh, my God, that’s a massive wave!” and I expected it to cut to a shot of a Wimbledon crowd doing a Mexican wave. It’s strange how some things affect you.
During ‘Forbidden Planet’ his deadpan expression only hints at what must have been going on in the actor’s mind, but in 1956 nobody would have thought twice about it.

Walter Pidgeon plays Morbius convincingly as the rather remote, clever Scientist – almost in the same way as he portrayed the Admiral in the movie version of ‘Voyage to the Bottom of the Sea’. He never struck me as a particularly interesting or exciting actor, but he always brought a certain gravitas or credibility to such roles.

Anne Francis makes a very beautiful and innocent Alta who is unwittingly misled by the odd Space Cadet into such human activities as kissing. Her costume design was very cleverly chosen to show her as being unaware of her sexuality while walking the tightrope of good taste demanded by the Hollywood Censor’s office.

Many younger viewers who are used to the pacing of modern day Sci-fi movies will most likely find ‘Forbidden Planet’ somewhat slow in its delivery of the storyline. How on earth will they have the patience to watch a movie that does not include explosions and action scenes every few minutes? The 1950’s audience would have sat open mouthed in wonder at the lavish sets, the new technology and the walking marvel that was Robby the Robot. Many of them actually thought it was a fully functioning automaton and would not believe that there was a diminutive man inside the suit.
‘Forbidden Planet’ is also interesting for its use of EastmanColor rather than Technicolor in its production. The old three strip process invented by chemical engineer Herbert Kalmus was being phased out due to its cumbersome cameras and being replaced by the Eastman Company’s single strip process. This wasn’t without its drawbacks due to the inability of early EastmanColor to reproduce some shades of make-up, enabling actors to call it the ‘liver lips’ process. Thankfully, there’s no evidence of the problem in ‘Forbidden Planet’ as seen in the Blu-ray release.

This is a movie that has a place in the collection of every serious Sci-Fi movie buff and it looks great projected on a big screen, preserving as it does some kind of scale and impact in its widescreen presentation. There’s nothing wrong in watching it on a TV, it’s just that Blu-ray provides us with a version of the film that will stand up to a method of viewing that allows us to see it as originally intended.
Blast off for Altair IV tonight.