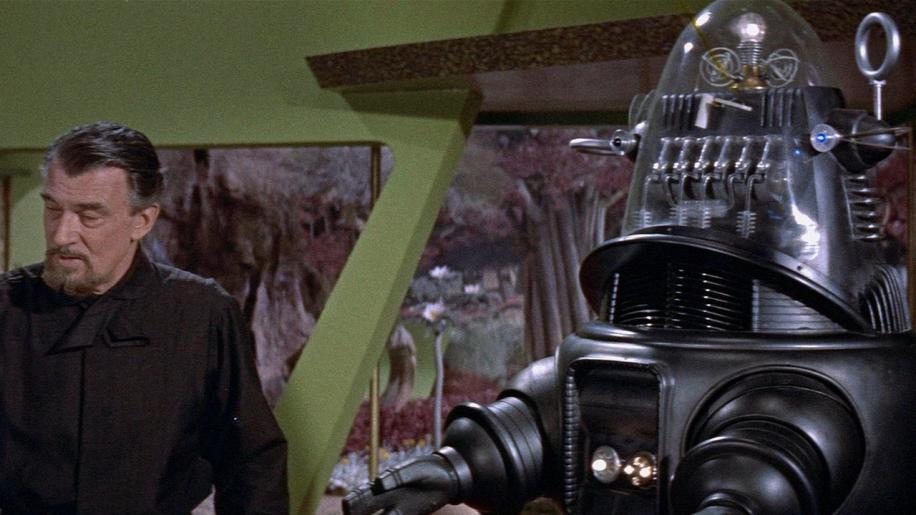 Forbidden Planet's lush Cinemascope photography is splendidly restored here by Warner's engineers with a virtually flawless anamorphic 2.40:1 transfer. There may a smattering of very fine grain, but there is no print damage on show with an image that positively gleams with colour and vitality.

For a kick off there is now much more detail available in the backgrounds - such as the dials and readouts on the bridge of the space cruiser, the contents of the fruit bowl in Morbius' house and the exotic vegetation outside in the garden. The Id Monster is more sharply defined, as are the multitude of laser bolts flashing across the screen. Robby's mechanisms are bestowed more attention from the transfer, too, really captivating the eye with all their clickings and turnings. Panning shots no longer suffer the old NTSC judder that the original R1 did, with the image remaining blissfully smooth and flowing throughout the action sequences. Fabulously deep blacks add immeasurably to the atmosphere and help to maintain a good contrast that, in turn, delivers an image with plenty of depth and scale. Pebbles and stones, dust clouds and side-arms have all become much more apparent with the clean-up job that the film has received, and the majestic matte paintings seem to blend in with the sets much better and more cleanly than before. The desert landscape is bewitching and the vast Krell underground complex is even more inspiring than ever before.

Clean, sharp edges bring the sets and the characters to colourful life and the film benefits from that warm, well-produced MGM sheen, the same buffed-up, rosy-cheeked health that made last year's The Wizard Of Oz re-release such a pleasure to view. I have yet to see the HD version of this release but, to be honest, this SD disc is simply glowing. Very impressive for a film from the fifties.

The picture for the full-screen The Invisible Boy is very good, too. Again, virtually untouched by age - save for a couple of wavering vertical lines of the blink-and-you'll-miss-them variety - this transfer is clean, crisp and displays excellent contrast. There is absolutely no grain to speak of and if there is some occasional hazing on the patterns of certain characters' clothes, then this is compensated for with the overall clarity and robustness of the image.

Now, all you purists out there don't be put off by the new DD 5.1 mix. It may not make the most dynamic use of a speaker set-up, but this track still adds a terrific new dimension to the film, beefing up the effects and the weird score and spreading some depth and space to the dialogue and ambience.

Some nice effects are things such as the blast shutters at the Morbius household thudding shut across the frontal array, the bubbling of the electronic score from all around the set-up and the impressive weight afforded the frantic crackling and humming of the huge Krell machinery. Voices track the speakers around the room, although this can sound a little bogus sometimes, with certain portions of dialogue coming over as falsely booming. But the overall sound design has received a Krell-like boost and the results are beneficial in the main.

The Invisible Boy's mono track poses no problems with its transfer, either. Again, very clear and crisp and producing a fine level of dialogue, a warm musical score and some firm weight behind the effects and bombastic moments.

Although I'm disappointed that there isn't a commentary track - I'm sure a retro-chat from Leslie Nielson would have been a hoot - this release really does epitomise the tag of Ultimate Edition. If the additions of The Invisible Boy and the episode of The Thin Man weren't enough, we get three documentaries and a plethora of Deleted Scenes and Lost Footage.

Disc One contains the main attraction and a number of cool extras. First up, we have the Deleted Scenes (13.08 mins). Culled from a workprint of the film, the sequences shown here were either entirely removed, or were later re-tooled. We are treated to some rough, or alternate takes of scenes without FX and to some good extended cuts that reveal deeper levels of character and, in one particular case, adds some important dialogue that explains one of Cmdr. Adams' slightly confusing remarks to Jerry Farman during the approach to Altair-IV. Some of these scenes are in poor shape and have the Lap Dissolve cards in place to signify the edits to be made. It's all nice to see, though.

Then we get the Lost Footage (9.15 mins) Here we are presented with some very rare test footage dug out from MGM's vaults. With explanatory notes describing what we are looking at and the film's wacky score playing over the top, there is some excellent stuff on display. The space scenes look wonderful even in their unfinished state, and you can clearly see where Gene Roddenberry got his visual influences from for the Enterprise's transporters and planetary fly-bys.

MGM Parade has two segments which, with a Play All option, run for 6.14 mins. Walter Pidgeon introduces black and white excerpts from MGM's promotional footage reels and offers a somewhat lazy narration about the forthcoming film and supplies some on-set reporting, including an introduction to Robby.

The Thin Man: Robot Client TV episode (25.30 mins). Presented in full screen 1.33:1, and in extremely good, clear condition, this shows a story in the long-running and popular series of screwball investigations in which our hero, Robby the Robot appears to be behind some nefarious goings-on. If you are into The Thin Man, you'll have a blast. If not, hey ... there's still Robby the Robot to enjoy.

Lastly on this disc, we get a Theatrical Trailer Gallery which is a full-on cavalcade of rip-roaring 50's sci-fi classics that you can view with a Play All option, or individually. This is terrific stuff, folks. As you know, I am a major fan of these movies and some of my absolute favourites (which I've already covered in the Retrofest) are hauled out with lots of portentous voice-overs, scratchy prints and copious OTT editing. Barring the trailer for The Thing From Another World (my overall favourite sci-fi movie from the era) which comes over as terribly overdrawn and tedious, this is marvellous fun. The end of the world has never been so exciting. For the record the trailers are for The Thing, The Beast From 20,000 Fathoms, Forbidden Planet, The Invisible Boy, Them! (another total classic - see separate review), The Black Scorpion and The Time Machine (also reviewed).

Disc 2 contains the film The Invisible Boy and the three documentaries.

TCM Original Watch The Skies!: Science Fiction, the 1950s and Us is 55 mins long and has 12 chapters. Narrated by Mark Hamill, this feature takes an emphatic, but enjoyable look at the political and philosophical values of the films released in this audacious and creative decade. With input from Steven Spielberg, George Lucas, Ridley Scott and James Cameron, we discover the rather frightening representation that these films gave to the paranoia of the Cold War times and the dawning of the Atomic Age, and how movie-makers translated such fears into monsters, mutations, madcap effects and plentiful metaphor. All our favourites get a good mention, including The Day The Earth Stood Still and the terrific Invaders From Mars. Great feature, folks, and I loved every minute of it.

Amazing! Exploring The Far Reaches Of Forbidden Planet is only 26.31 mins long but packs in an awful lot of reminiscences from the likes of Leslie Nielsen, Anne Francis (who still looks lovely even now!), Earl Holliman and Richard Anderson about their experiences making this classic all those years ago. But the real meat of this feature are the contributions from the film's many illustrious fans. People such as John Carpenter, who was surely influenced by the film's electronic score, Dennis Muren, Phil Tippet and John Dykstra who developed a passion for special effects after being wowed by the film's visuals, Star Wars sound engineer Ben Burtt loved the Id monster's aural menace, novelist and film-tie-in-specialist Alan Dean Foster, movie historians Rudy Behlmer and Bob Burns and then the likes of Joe Dante and John Landis, whose only work these days is appearing on DVD retrospective making-ofs. Check out the great conceptual artwork for the monster from the Id, especially the one that depicts Morbius' head on top of a two-legged monstrosity - very reminiscent of the gruesome guises adopted by The Thing in John Carpenter's version. Too brief by far - I could watch this stuff all day and never get bored - this is still packed with fascinating titbits, and even if it ultimately comes across as more of a fan-fest than a fully-fleshed retrospective, there is enough genuine love and affection for the film to make it worthwhile. It is also nice to hear from Bebe Barron who, along with her husband, created the wonderfully weird electronic score - or tonalities, as it is credited in the film.

Robby The Robot: Engineering A Sci-Fi Icon is 13.44 mins of cut and paste snippets from the same interview sessions already featured, although this is all new material and provides more air-time for Joe Dante, Behlmer, Holliman, Burtt, William Malone and John Carpenter. We do get to hear from Robby's creator, Robert Kinoshita and get to see lots of different conceptual designs and early posters. It is quite cool to finally see the man who got to wear the robot suit, a little fellow called Frankie Darro, who had to have his face painted black so that it wouldn't show from inside Robby's chest. And we get to see Robby as he is today - still in good nick, just like Anne Francis - and have a recap of his career so far. But what is really interesting is hearing from Fred Barton, who has made a living out of building and selling Robby The Replica, and we get to see the finished, full size model in action too. Outstanding.

Very enjoyable all round, folks.

The Ultimate Edition also comes housed in a wonderfully evocative tin box with eight lobby cards for Forbidden Planet and nine for The Invisible Boy contained in a space-illustrated case, and the smart little Robby the Robot miniature. But, just when you thought “Ahhh, look at how cute he is!” you will then find a one-sheet advertising that full sized version that Fred Barton sells. That's full-sized, folks! Seven feet tall, no less, and automated with sounds and lights and moving parts. Just how cool is that? Sadly, even for me, this would be a step too far into a financial dimension that my bank account has not gone before, so I'll just have to make do with its little cousin.

All in all, this is an exemplary package of features for the grandfather of all sci-fi movies. Very worthy, fact-packed and fun. And the whole set looks great on the shelf. When will they get round to doing one of these all-singing, all-dancing special editions for The Thing From Another World, though?

First rate, folks. I've waited a long time for a special edition of Forbidden Planet to come along, and when it did, it didn't disappoint. I know there's no commentary, but just look at all the other goodies on offer. The fun deleted scenes and lost footage make up for the slightly superficial making of, and the additions of The Invisible Boy and The Thin Man are nice for completists, like me.

One of the greatest sci-fi films ever made and a truly magnificent DVD release, too. Forbidden Planet is also available in HD, but whichever version you opt for, you are in for a real treat. A personal favourite of mine, a fondly recalled classic and a darling of the critics, as well. I can't recommend it enough. Forbidden Planet is essential - a box set with free grin-of-satisfaction value thrown in.