For The Love Of Ada DVD Review 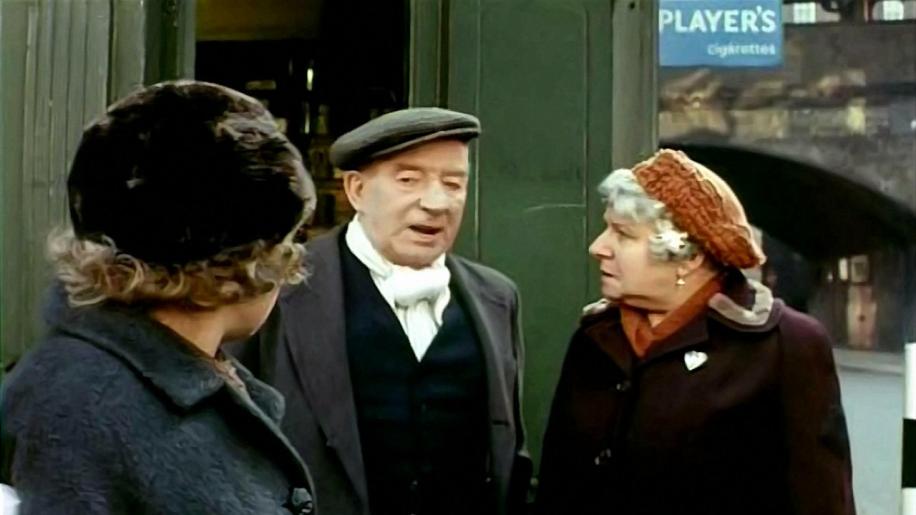 Freemantle Home Entertainment have released For The Love Of Ada in, presumably, its original full screen image. Now, given its vintage and pedigree, the film does suffer with grain, which is prevalent throughout and there are occasional moments where print damage intrudes with scratches, flickers and some halo burns top right. Skin-tones have a rather unfortunate pinkish tinge making everybody appear slightly ill. Close-ups are quite well detailed and the disc does contain a reasonable black level, sustaining a reassuring sense of depth. Background detail suffers quite a bit, with edge delineation losing a lot of integrity - particularly the oddments cluttering up the shelves in Ada's and Walter's house and the trees around the graveyard. Scene changes or sudden switches of camera angles often reveal drastic drops in quality - from a relatively clean image to one abruptly engulfed with grain and print damage for a second or two. But, for a film of its age, this is hardly surprising and doesn't detract too much. There is also the occasional shimmer on certain objects, like the pattern on somebody's cap, say, and I noticed a touch of blurring on fast motion - not that the film contains much of that. Most worrying of all, though, is the green ghosting around some edges that crops up a little too often and can be slightly irritating. I have seen this ugly effect in far worse degree on other discs, though. Let me stress that this is only a check disc that I am reviewing and some of these problems may not be evident on the full release version. The sound is delivered very prominently through the left and right speakers. Actually coming over very clearly, the audio transfer is pleasantly free of distortion, hiss or crackle. Although lacking any sort of dynamism, and let's face it, the material would hardly warrant any sort of wrap-around activity anyway, For The Love Of Ada performs more than adequately in the audio department. Dialogue is always well handled and never sounds muddled or subdued and the music is nicely presented, too. Plus, listen out for the lovely clarity of the birdsong twittering all around the graveside. Very typical of a soundtrack that is crisp and consistent throughout. All that was on offer on this check disc was the original 2min 48s theatrical trailer, but I've seen the retail release listed as containing the first actual episode of the TV show, as well. Just have to wait and see when it hits the shelves. Hardly rip-roaring stuff, then. But, For The Love Of Ada is still a pleasant enough diversion despite being little more than an extended episode. Whilst it certainly featured all the homely cosiness that I expected it to, there was still a refreshing degree of angst and some delicious mood-swings pitched into the pot. Freemantle's disc is way short of spectacular with a scarcity of extras and some inconsistencies with the video transfer but, if you are a fan or a collector of 70's British comedy, I don't think you'll be too disappointed. It's enjoyable yet eminently disposable.