For All Mankind Movie Review 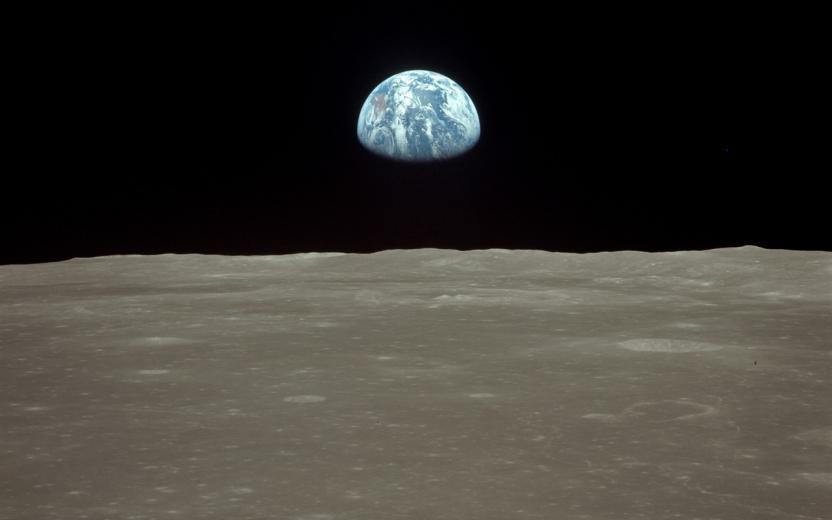 The Sixties were an exciting time, a new broom sweeping though the Whitehouse only to be cut down in his prime, movies and music exploring new technologies, ideas and directions and because of one Kennedy speech a desperate desire to see man land safely on that orbiting piece of rock, the moon. I can just remember the excitement that the first of these ventures created in the late Sixties, remember watching faint black and white images beamed back from 250,000 miles away onto our little tube in the corner. I had my own spacesuit which I demanded I wore whilst walking around the mill towns of Lancashire and I remember collecting the little Space Race cards which came free in boxes of PG Tips. In July 1969 an Eagle landed a quarter of a million miles away and the world looked on in awe.

Lasting memories from the Apollo excursions were always a little thin on the ground and those that were available always seemed as though I was still watching them from my parent's little black and white television from the Sixties. The images always appeared a little blurred, a little out of focus. Then Al Reinert steps into the frame, scours the NASA archives, daringly asks for access to the original film and puts together a collection of images narrated by some of the pioneers of the space program. Now everyone can enjoy a permanent record of those few years from the late Sixties through to the early Seventies.

Although the main purpose of this disc is to recount the experiences of the initial moon landing of Apollo 11, there are some shots in there of earlier Mercury missions, some speech and footage from later Apollo launches and of course this does include the now famous “Houston we have a problem” from the ill fated, but glorious, Apollo 13. Contributing to the narration are the faceless voices of Edwin Aldri, Bill Anders, Neil Armstrong, Stephen Bales, Frank Borman, Walter Cunningham and, amongst many others, Jim Lovell and Jack Swigert. So we have some of the men who flew these great beasts and some of the supporting ground crew who kept them on track. If you're going to get it from the horses mouth then this is the place to come. I felt it was a little odd that the names of the person speaking at the time was not flashed up on screen, and I for one would have preferred it had they been there.

We have our cast and our crew but the Apollo missions would not be complete without discussion on probably the main participant in these ventures; the Saturn V rocket. This is an absolute behemoth of a transport, standing almost twice its height it dwarfs today's shuttle launch system, it had less computing power than most modern cars, the thrust it expelled was enough to ensure it reached sufficient escape velocity and finally cruise at a steady 25,000 miles per hour, the three men encased within sat in the small cone at the very top of the cylindrical fire cracker. It was a glorious machine to behold, designed with one purpose in mind and the launches themselves were incredible affair to watch as the booster rockets kicked into action, the vacuum created by the initial ignition eventually pulling the flames back under the boosters, the formed ice cracking away from the shell as the beast took flight. Glorious to see in their day and really only ever bettered when Digital Domain tried their hand in Ron Howard's Apollo 13, a film I still have a sneaky love of purely because of the interest I had in those early Apollo missions. To its credit this feature captures the excitement, the intensity and, more often than not, the fun of these space missions.

Understandably when that precious film was returned from those space voyages copies were made and the originals archived for protection and posterity; you can understand why. However NASA doesn't do things by halves, archiving here means the original film is frozen, and then placed in a a sealed vault which is kept at optimum temperature and humidity. All the shots normal Joe Public has seen since are copies of these originals, and more often than not copies of those copies. Reinert pleaded to be allowed to go back to those originals, to his surprise and glee he was allowed. Reinert 'took' the original 16mm footage, blew it up onto 35mm film stock, cleaned it, digitally removed any anomalies and finally released this onto the big screen. Like the Saturn V rocket it would have looked tremendous on the large screen. Whilst nowhere near as glorious as a Saturn V rocket, but probably better than the local flea pit, it still does in my home cinema and will do so on most calibrated large panel displays. All I can say is that this is definitely worth a good watch even if it's just a rental.

Originally released on Region A this Eureka locked Region B disc is a direct port of that earlier Criterion edition, is an excellent addition to my Blu-ray documentaries and for me this is certainly a keeper. I had an avid interest in those early moon landings and I would suspect that anyone from that era would also welcome having this. For everyone else this might be somewhat of a curiosity, worth a watch but whether you decide to buy and own will purely depend on your interest in those early footsteps. Ultimately though I can do nothing other than wholly recommend this to anyone.