Tempting the old boys out of retirement 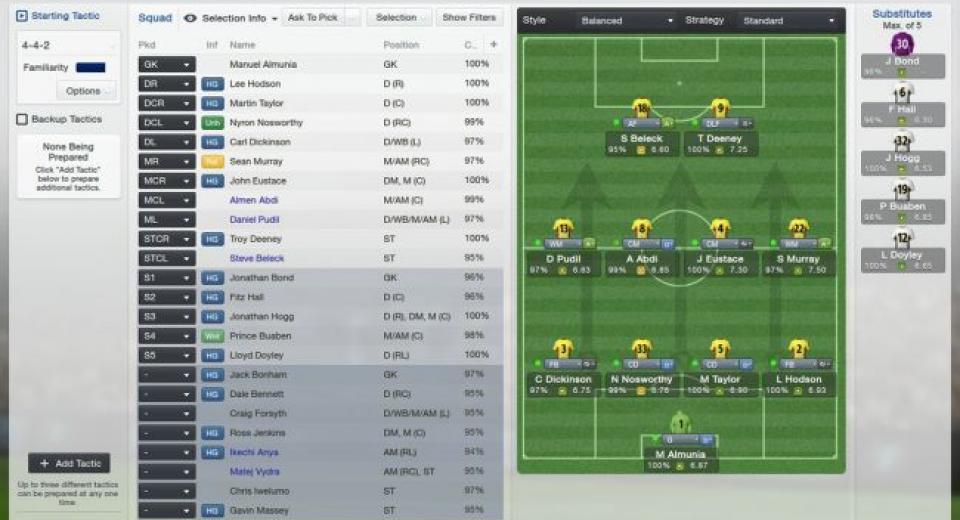 In recent years, discussing Sports Interactive’s Football Manager series has taken on a dependably consistent tack: run through the significant updates for long-term players, mark out the improvements to accessibility for newcomers, discuss how blindingly addictive and magnificent it all is, and then move on to your new 12-month addiction despite telling yourself that you’d take a year out. Football Manager 2013 begs to upset that formula in a few significant ways however, the most high-profile of which is a ‘classic mode’ targeted at a legion of lapsed junkies (those of you that managed to escape the clutches of the series long before the 3D match engine occurred and player salaries reached levels that dwarf the annual budgets of small nations).
If that sounds like you, and if you’ve been knocked for six by life commitments or just found yourself delving into other obsessions for the past decade, then you might want to look away now; 2013 will tempt you back into its comforting, enraging and incredibly satisfying deep-heat stinking arms like never before. Classic & Challenge Modes
As the half of Football Manager developed with time-pressed consumers in mind, Classic Mode offers up a distilled and focussed experience that’s similar in tone to the long-lost days of Championship Manager at the turn of the new millenium. It is, to all extents, a halfway house between the full game and the mobile iteration that SI has been toiling on for the past couple of years, and it allows you to blitz your way through a full season in an afternoon rather than a few days or weeks with the full-fat variety. It’s also incredibly nostalgic for that very reason, and it may well have you pining for the utilitarian days of Paul Warhurst or that afternoon when you signed Trevor Sinclair and he put five past Man Utd.
Classic Mode eschews many of the granular details that define the series in modern times then, instead building its gameplay hooks around the everlasting pillars of transfers and tactics. The fine print and minutiae of day-to-day managerial decisions never surface, and although the same engine processes the match-day action, in-between you’ll concern yourself only with the broad strokes: wheeling and dealing for the best upcoming and value prospects, working on your chosen formation and fine-tuning your tactics to best suit the available roster of players.
Amazingly though, Classic Mode never seems like a lightweight prospect and still packs the same level of addictive quality exhibited by its fully-developed other half. There were evidently some excellent decisions made over which features to cut and which were absolute essentials to convey the experience, and in that regard, Classic Mode is also a fantastic place to start for newcomers. Half-time team talks, assistant manager duty delegation and player meetings can wait, frankly.
Challenge Mode is a further extension of that philosophy, giving you scenarios to play through with a set outcome to aim for (saving a team from relegation, finishing above a certain position, etc). They’re fun asides that seem to have been borne from both the mobile iterations of FM and also from the save files that regularly make their way around message boards every season, and it’s nice to see something quick and light-hearted thrown into the mix that forces you to become familiar with different leagues, clubs and groups of players.
In another nod to the mobile and downloadable market, it’s worth noting that Challenge Mode also allows you to pay real-world cash for boosts that allow you to get through each scenario with a bit more ease. They can of course be safely ignored if that’s not your bag, and the hallowed turf of the full management sim is entirely free from such micro-transacting. There’s a home for that approach, and SI have wisely sectioned off their challenges as a test-bed in that regard. It’s a bit of fun, and should be approached as such. Career Mode
Delving into things ‘proper’, if you’re one of the long-term Football Manager fanatics you’ll be pleased to learn that despite the inclusion of that new Classic Mode, the traditional Career Mode is very much still intact and has received the usual slew of tweaks and updates this time around. Indeed this is one of Sports Interactive’s better years for changes, with Football Manager 2013 much better at simulating the role of delegation that all modern-day managers face. Assistant managers are much more important than ever before, to the point that you can allow them to take over virtually any aspect of your club as you see fit, and they also provide a constant stream of twitter-like tactical updates during your regular matches.
That addition in itself almost completely overhauled the way that I played the game. No longer were some of the deeper on-pitch mechanics shrouded in mystery, so if - for instance - your left-back is constantly misplacing passes or your striker is being marked out of the game, your assistant will pipe up with a quick nugget of information to let you know, allowing you to tinker with formation and player roles to your heart’s content. Those quick bursts of text effectively transform your interaction with the team during their time on the pitch, resulting - in my case - in a reduction of the game speed slider and a whole lot more micro-management during open play. The line between simulation and real-life blurs a little further, the time to complete a season stretches out yet again.
Off the pitch, training is another area to see some significant polish and development, with a new interface that allows you to see your schedule and set up individual routines in a much more streamlined fashion. Again, your assistant manager pipes up when necessary in that regard, encouraging you to increase the work rate, put players onto routines that finesse their individual capabilities, or to give over time to working on specific formations for deployment at the weekend. Left to my own devices I’d likely have never delved too far into that system, but the constant stream of updates and tips from your right-hand man makes them seem essential and vastly more rewarding than previous versions.
Elsewhere, press conferences and player interactions are more prominent and detailed than ever before, offering up choices in vocal tone with which to send your reply (individuals react differently to each choice). Presentation too, has been given another buff and layer of polish, with some neatly sliding HTML 5-style interface elements on show throughout, and another layer of presentational depth added to the match-day screen. Information is easy to filter through and arrange as you wish, whilst the 3D match engine is a little smoother than it was previously. It has to be said there’s still a lot of work to be done there though, with animation choices and transitions still sticking out a little in comparison to ball movement and the context of a lot of player actions. It is, however, completely watchable this year, and it’ll only get better in coming seasons. With the introduction of Classic Mode, Football Manager 2013 is undoubtedly one of the more striking releases in the series thus far. The fact that it allows folks with less time to get involved again is something genuinely notable, and I suspect a lot of players - both new and old - will spend a massive amount of time in that cut-down playground. Even if they don’t, the full simulation is more involving than ever before, with the new assistant manager feedback marking out whole sections of the engine that may well have gotten short shrift from players in years past.
It is, of course, very much still an acquired taste, and it’s also very much another iteration built on the same rock-solid foundations. The question of value is entirely subjective with Football Manager at this stage of its life, but as a long-term player of the series, I can safely say that 2013 is one you definitely won’t want to miss.