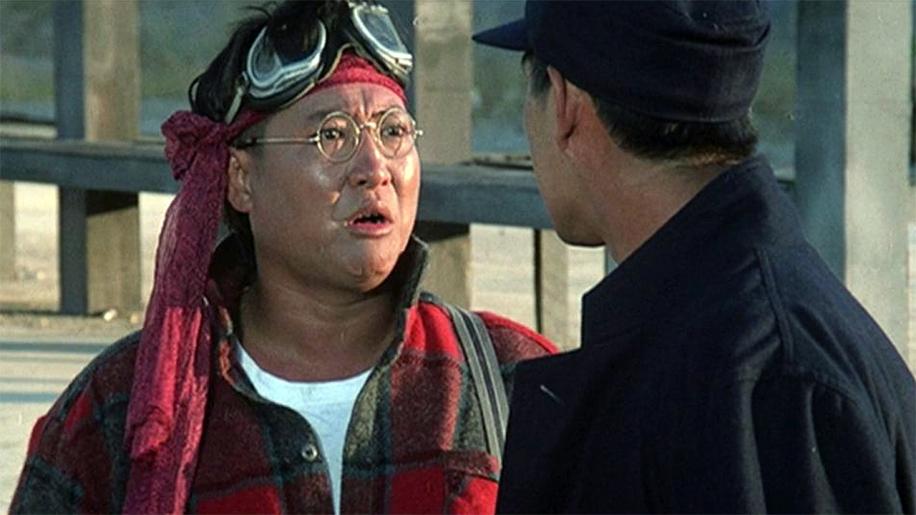 Comedy's a funny thing. There's no mid-ground normally, it's either funny (and appeals to your sense of humour) or it isn't. This movie is described as a homage to “the screwball comedies of 1930's Hollywood combining martial arts, comedy and Wild-West action”. So what's it all about?

Well, the plot revolves around eccentric entrepreneur Chin Fong-Tin (Hung), returning to his hometown with a group of beautiful women set on establishing a house of ill repute, much to the annoyance of the town's sheriff. Chin believes he can bring prosperity to his hometown by sabotaging the maiden trip of the Shanghai Express, leaving the wealthy passengers stranded there, which would force them to spend their cash. However, unknown to Chin, a small army of bandits also has it's sights on hi-jacking the train, not to mention a gang of Japanese mercenaries planning on raiding the local temple, enabling them to steal a collection of valuable terracotta figures. Soon Chin and his fellow townsmen much put their differences to one side and band together to fight the evil-do'ers.

Well, the movie isn't my cup of tea, I'm afraid. Don't get me wrong, I like Asian cinema, mostly however the thrillers and horrors that have come out in recent years, from Evil Dead Trap to the more well known, such as Ringu, but martial arts movies I just don't “get”. To make matters worse, the comedy is slapstick, which again, doesn't work for me - I find it rather juvenile. To further make things worse, it's set in the Wild West as such, and I really hate Westerns (not as much as war movies though). So, bearing in mind my prejudices, I'm not going to rate this highly. However, I am sure that some people will enjoy this, as I know I'm in a minority by disliking Westerns, Slapstick and Martial Arts. There is a strange feeling to the feel of this movie - I almost expected David Niven to appear during it, as it has that kind of feel. For martial arts fans, you may feel somewhat disappointed, as with one exception, there isn't any real “action” for the first hour of the movie - it's all character introduction and setup. Of course, there are comedy moments during this, but as it is slapstick, it's typical of the 60's British comedies to me, more than the 30's Hollywood, but then I guess it's what you grew up with. Acting wise, it really is quite cheesy and it certainly fits in with the 70's/80's style of B-Movie acting, certainly re-awakening all those memories of the martial arts movies of that time. Does the movie have any redeeming qualities? Well, to me, no, not a single one. It's just that of the entire genre's it covers, it just happens to hit 3 of the ones I dislike the most. However, having said that, I am sure that it will have its fans, in fact if you like this style of movie, I'm sure I'd recommend it without hesitation. It's just not for me, though.