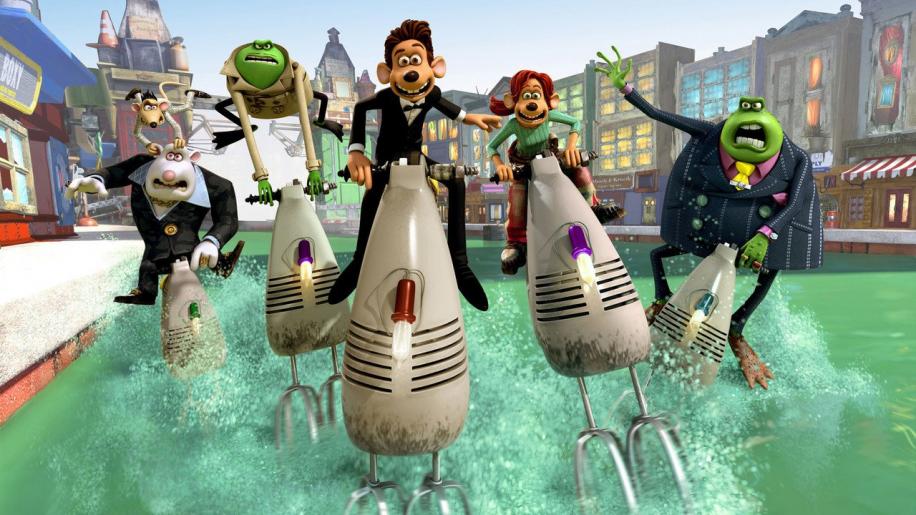 Aardman are normally known for their stop-motion animation work, most famously with Wallace & Gromit, although they have other creations, such as the Creature Comforts bunch that were used in a British Gas advertising campaign. Flushed Away is a collaboration between Aardman and Dreamworks Animation studios, in fact it's the final one. This is a completely CGI based movie, with characters that look very much of the same ilk as Wallace & Gromit. So, what's it about?

The story focuses on Roddy (Hugh Jackman), a domesticated rat who lives in Kensington and a happy life he leads. One day, his owners disappear on holiday, leaving him the proverbial run of the house, until Sid (Shane Ritchie) arrives ruining Roddy's status quo. Thinking he can trick Sid into taking the porcelain highway to the sewers, he ends up flushed away himself (hence the title). The main storyline is one rats struggle against obstacle after obstacle, as he claws his way back to his Kensington palace, helped by Rita (Kate Winslet), a somewhat girl-powered enabled femme who captains a boat named “The Jammy Dodger”. Factor into this a plot to be hatched by The Toad (Ian McKellen), Rita's nemesis and a variety of other characters, including singing slugs, it's a frantic quest to get Roddy home.

I'll admit, I don't get the attraction of Wallace & Gromit. It could just be it's not funny to me, it could be simply that Peter Salis' voice reminds me of the awful Last Of The Summer Wine or it could be I have no sense of humour (unlikely though) but the attraction of them just makes my mind boggle. This however, isn't too bad although clearly aimed at the younger audience. The jokes are relatively low-brow, verging on lavatory humour, but I guess this is what the target audience “gets”.

The movie itself rambles along at a pretty fast pace, the singing slugs do tend to be overly obtrusive (initially amusing, but wore thin by the end) and while it didn't amuse me greatly (except for Jean Reno as “Le Frog” - just because of the obvious reason), it is a decent enough family movie - even if it's not necessarily my cup of tea. The animation is very good and mimics the stop-motion exceedingly well. The characters have some nice personality traits, be it from Rita's randy granny to The Toad's 2 Henchman (Henchrats?) and the voice talent works very well, particularly Bill Nighy's character - although I dislike Shane Ritchie, but then, who doesn't?

If there's any problems with the movie, it's simply that it's not as varied humour wise as other animated flicks in recent memory - take The Invisibles for example where the humour worked on both child and adult levels. That's not the case here at all, with the exception of Le Frog.

But when all is said and done, this movie is a great way to get some peace from the kids for 80 minutes. It's loud, brash, vibrant and will entertain the little rugrats and for £14 or so, that's not necessarily a bad thing.