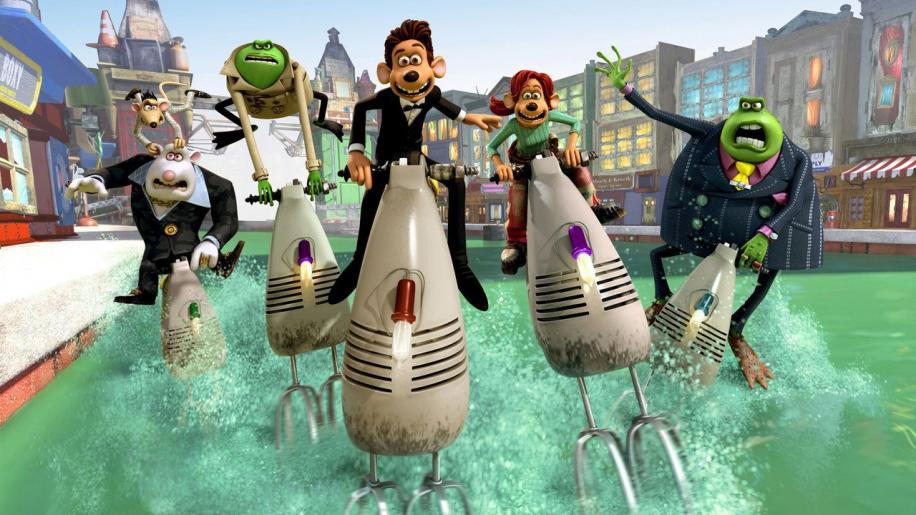 Even though, after watching a lot of HD material, you'd think this would be considerably worse, but this is actually a really good transfer. Watched on my 1080p screen, even at the regular setting of 576p, this DVD looks nice and sharp, which given it's a transfer kept in the digital domain, it should be. Colours are vibrant, with vivid swathes across the screen, from Union Jack trousers to the whole mini “London” of the sewers. Detail is really good here too - check out the coving in the bathroom just before Roddy gets flushed. Even black levels are good - the “slug on the wall scene” and Sid's entrance really highlight these areas. I didn't notice any bleed or halo and artefacts weren't noticeable either. All in all a very good transfer. With a Dolby Digital 5.1 soundtrack, this is perfectly adequate, but I didn't feel that the rear channels were used particularly well. Dialogue is clear throughout, even though some of the actors aren't obviously recognisable (Jackman and Winslet being the obvious ones) and the music from the front channels is particular rousing in places, springing to mind would be “Proud Mary”. Even the LFE gets a bit of a showing, although infrequently, but the rear channels just sounded a little weak overall. In a word - lots. From a director's commentary track and the Music of... featurette, to meeting the cast and lots of slug featurettes including a jukebox, this is a pretty packed disc. The problem is most of the featurettes are aimed at the kids and the serious ones are very light and fluffy, bordering on sickly sweet. But as I originally stated, this is a movie aimed at the kids, it follows that the extras would follow suit. Not my cuppa, but I can see how this would be popular with small creatures known as Children and families in general. It's probably worth nabbing a copy as an alternative gift to chocolate eggs over Easter - and it may just last a damn sight longer too.

The score reflects the movie from a family point of view, rather than mine.