Flight of the Phoenix Movie Review 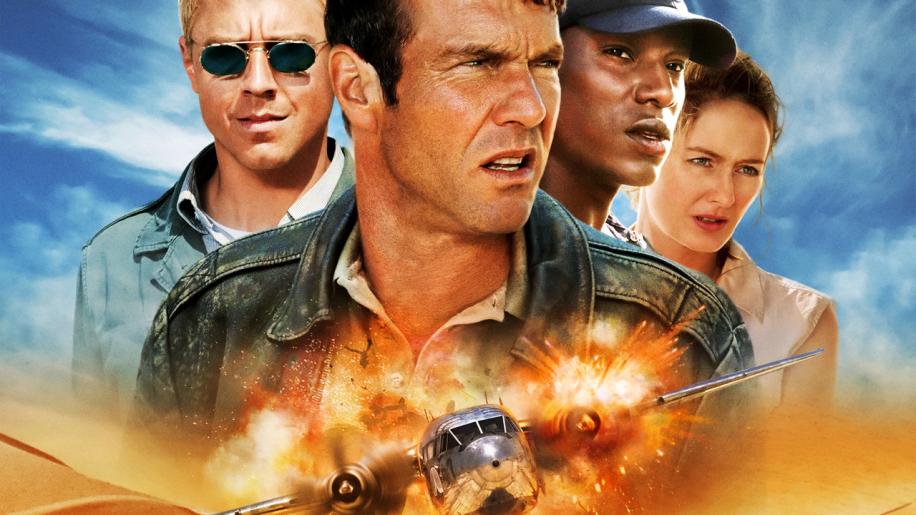 James Stewart is probably my favourite Hitchcock actor. Although Cary Grant comes close, Stewart wins, simply because he made several consistently decent movies for Hitchcock, whereas Grant really only made one standout movie and a bunch of average ones. In 1965 Stewart starred in the original incarnation of Flight of the Phoenix, based on the novel by Trevor Dudley Smith - itself very loosely based on a real-life, and much less glamorous desert crash incident. The '65 film was a very successful endeavour, utilising an extremely restricted set to its fullest potential and creating a taut, dramatic production that vastly expanded on its basic concept of being trapped in the desert. It also had an interesting mix of A and B-list actors making up its ensemble cast: aside from Stewart you had the talent of Richard Attenborough, Peter Finch, George Kennedy and even Airwolf stalwart Ernest Borgnine. Forty years later, with remakes all the rage now, and it's not surprising that Flight of the Phoenix has come back to life. The question is, was it really necessary and is it any good?

Frank Towns is the Captain of a shiny silver air-truck sent into the Gobi desert to pick up a motley crew of oil workers who have failed in their mission to strike oil. After herding them onto his twin-prop C-119 jalopy, they run into a horrific, debilitating storm and are forced to crash land. Trapped in the middle of the desert, with their water supply running out and their morale low, it is up to their reluctant leader - the Captain - to rally their spirits and drive them to fight for their survival. Amidst the survivors, initially there are many significant character clashes but eventually they realise that they have to work together if they wish to survive.The film stays true to both the original story and the first cinematic interpretation, throwing a couple of minor twists into the mix but basically keeping the main characters and plot-lines the same. Heading up the cast, Dennis Quaid (Innerspace, Tombstone) does an admirable job in Jimmy Stewart's original role as Captain Towns (even retaining the name and offering up a brief but very good impression of Stewart at the beginning of the film). He's a world-weary veteran who seems bitter at having to ferry grunts around out in the middle of nowhere but, at the same time, still happy that he can at least do what he does best - fly planes. As with the original, Towns is extremely downbeat when initially dealing with the crash - pretty much resigned to just dying out in the desert - but then he undergoes a transformation over the course of the movie, eventually coming to terms with the realisation that the crew are depending on him. It's a good part for Quaid and he does a lot with a role that you would expect to see somebody like Harrison Ford in but, occasionally, the firm adherence to the original story does seem a little strained. Still it marks a change from the usual all-American hero characters you expect with Hollywood.The character of his co-pilot, A.J., is not fleshed out as much as in the original but then again the actor who portrays him, Tyrese Gibson (2 Fast 2 Furious), is just not Richard Attenborough. However, his blind devotion to and defence of his Captain certainly gives him conviction. The oil workers are led by Miranda Otto's Kelly, who is convincing in her tomboy role, but occasionally feels a tiny bit like the 'token female and romantic interest'. Where, as Eowyn in the Lord of the Rings films, she captivated the screen with passion, courage, beauty and sheer presence, here she is no more than just another member of the crew, distinguished only by a difference in gender to the others. The problem is that, not only is her character subdued and clichéd but that the others are far more interesting: you have the philosopher Rady (Kevork Maliykan - Indiana Jones and the Last Crusade), the religious cook Sammi (Jacob Vargas - Crimson Tide, Get Shorty), the angry Scotsman Rodney (Tony Curran - Ultimate Force, LXG) and the one-eyed marathon-running gangsta rapper Jeremy (Sticky Fingers aka Kirk Jones - Clockers). Then there's the stiff-upper-lip corporate Brit, Ian, who pulled the plug on the oil expedition in the first place - expertly played by Hugh Laurie (Jeeves and Wooster) in a much darker role than you would usually expect from him. To top it all off we have the excellent character actor Giovanni Ribisi, from films like Gone in Sixty Seconds and Boiler Room. He always seems to play the least likeable characters and this is no exception. He is Elliott, the proud, arrogant and eccentric Arian-looking extra crewmember who appears to know a lot more about planes than he initially betrays.With a couple of minor plot points (Why not fix the radio? And don't almost all planes these days have location transponders?), and an occasionally predictable plot that has been done before - and arguably better - it is basically up to this ensemble cast to bring the film to life. To give them their due, they do a pretty stand-up job but, to be brutally honest, if you haven't seen the original then that's where you should really start. It's a generally more taut and believable drama and the remake, bar one particularly noteworthy scene involving a perfectly placed Massive Attack song and some nomads, brings little new to the original vision. That said, the concept is itself a cut above the general fodder that we have come to expect from Hollywood so this remake will not fail to entertain, even if you are familiar with the story. It is well directed (by the man behind the decent actioner Behind Enemy Lines) and well acted, with some excellent stunts and action set pieces and basically a nice feel of camaraderie running through it. I usually get upset when I hear about remakes, especially ones that bring little new to the endeavour (the recent and appalling Taxi version simply made my blood boil) but Flight of the Phoenix managed, despite all of my reluctance to accept it, to win me over. There will always be a strong argument against remaking any film, let alone such a classic, but fortunately this film does not fuel such an argument as it is a perfectly enjoyable survival drama in its own right.