Flight Of The Phoenix DVD Review 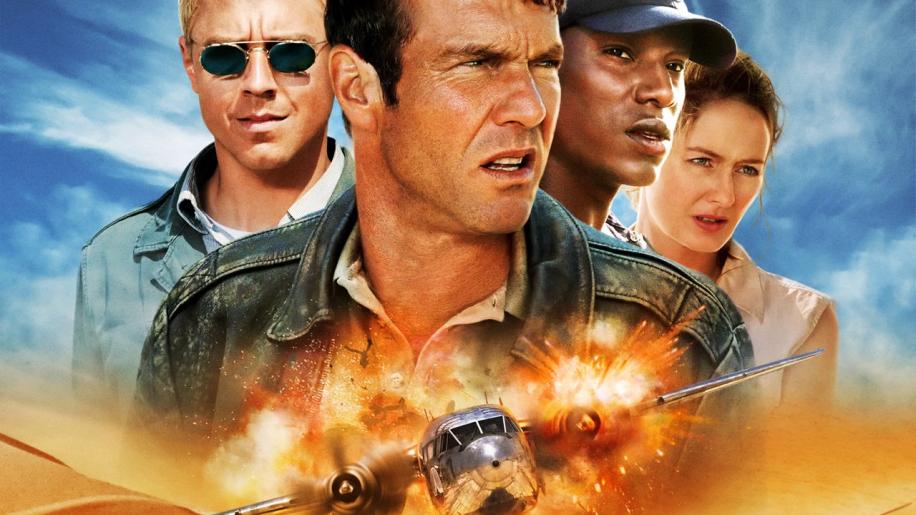 Flight of the Phoenix is presented with a glistening 2.35:1 aspect ratio anamorphic widescreen transfer. For a film largely set in a desert where sandstorms are prevalent, there really is a remarkable sharpness and clarity to the picture. Sure, some of the storms are CGI, but the facial expressions during many of the scenes in the film show a keen observation and attention to detail. Many of the aerial shots towards the beginning of the movie show off just how good this transfer is, with no signs of the artefacting or edge enhancement and a beautiful clear blue sky completely devoid of grain. There are a few strange digital effects that might have you confused as to the realism of the colour palette used (they do saturated 'flash' sequences much like you would expect from the CSI crime series and some night-time sequences are shot with Digital Intermediate, which has a strange effect on the character of Rodney who takes on an unhealthy shade of green) but overall the daytime shots are basked in glorious sunshine and make the transfer simply gleam. Finally, as you would expect from a film shot post-millennium, there was absolutely no discernable print damage - no dust, dirt or defects.

There are two main English audio tracks - a DTS 5.1 and a Dolby 5.1 track. With the DTS track, right from the start you can tell that this is going to be a great movie for sound, with Johnny Cash singing out of the surrounds whilst the plane thunders around your living room, merrily doing fly-bys straight over your head. With crashes, explosions and gunfire aplenty, it is no wonder that Flight of the Phoenix sounds so damn good, but credit should be given for the effort that has clearly gone into providing substantial LFE support. The bass is simply astounding. Or rather the bass is the way that you would like bass to be for all films - loud and thunderous during the appropriate action scenes and brooding or surprising when trying to enhance the tension. Not only did the score sound good, but all of the perfectly chosen music tracks were superb and it is worth mentioning the Massive Attack contribution once more as the song chosen, Angel, is played in its entirety and builds up to a devastatingly powerful final verse. Whether to showcase the directionality of your speaker set up (with planes flying overhead or across the screen), or to simply demonstrate power, this is a great audio source. The Dolby Digital 5.1 track is inferior in terms of depth to the DTS offering but still noteworthy, as they have clearly tried to put a substantial amount of effort into also making this track effective in the bass department. Although DTS tends to usually win out, those with a Dolby-only system will not be disappointed. In addition, there is a dubbed French stereo track and optional subtitles in English and Spanish.

There is a full-length audio commentary with the director John Moore, the producer John Davis and the production designer... The trio discuss almost every aspect of the film's production, from the music used (the late, great Johnny Cash and the ever-brilliant Massive Attack - who are scoring the new Jet Li / Morgan Freeman film, Danny The Dog) to the plane used (the C-119 Skytruck, a derivative of the C-82 from the original movie). They talk about finding a suitable desert location - Namibia - and how filming there was expensive in terms of transportation more than actually shooting it. And they talk about the Digital Colour Intermediate processes that they used to change the time of day in some scenes. There are discussions on the original concept - like being 'lost at sea' - and how there were several script changes and scene rewrites to perfect the film. And aside from all the information they provide about the production, there is much discussion of the cast and how good they were - in particular Giovanni Ribisi and Dennis Quaid (who is actually a jet-rated pilot). The director is very passionate and this well-chosen trio provide and extremely informative and interesting commentary.

Then we have the Phoenix Diaries. This forty-minute documentary is one of the best DVD documentaries that I have ever come across. Rather than your usual glossy, promotional fluff, it is more like a short film in itself, following several days on set during the production, which started in late 2003. There are some great location shots and there is lots of behind the scenes footage and dailies, both in colour and black and white. Most of the cast and crew talk about the production - how it involved six-day weeks that often ended in heavy drinking and how they all bonded together by the end of filming. There is also some very frank coverage of those involved during various, fairly confrontational moments in the shooting - from the director's temper tantrums to the dislike that the cast had for on-set press conferences (Hugh Laurie and Giovanni Ribisi both cringe at the idea but Tony Curran lets loose with an angry outburst). It's funny because there is much, much more swearing in this documentary than in the actual movie itself - it will be interesting to see how the UK ratings board, the BBFC, deals with this. All in all, it is a great documentary (some parts of which were filmed by stars Ribisi and Curran themselves) that reminds me of some of the great on-set documentaries made for film classics like The Shining and Apocalypse Now, and is well worth your time.

There are four extended scenes, all presented in anamorphic widescreen with full 5.1 sound. Biplane - 90s - this is quite a good scene showing them missed by a potential search plane. “No one gets left behind” - 3 minutes - another reasonable scene where Elliott discusses specifics. After the storm - 3 minutes - a good scene where the plane is burried and they search for it. Pursuit / Extended ending - 2½ minutes - the only extra footage that was not entirely necessary because, although it did have a couple of nice stunts in it, the motorcycle footage was better left out.

There are two deleted scenes, although I don't quite see how they differ from the extended scenes, other than in the fact that they have optional commentary with the Director, John Moore, and the producer Patrick Lamb. Scene 67-69 After Crash - 2 minutes - As it says, this scene shows the state of the crew straight after the crash and they explain how it was removed in order to keep the action going. Scene C115-116 “We're drinking too much water” - 3 minutes - This is the only really unnecessary scene, although perhaps it would have gone to better show just how bad off they were in their situation. The director amusingly talks about how this was better off expressed in the montage that they eventually used - ironic as, post Team America, I just cannot take montages seriously!

Given that the movie is not even out in British cinemas yet, the Region 1 DVD release of Flight of the Phoenix is well worth a look and, to keep fans happy, it has a wealth of extra material and decent technical specifications.