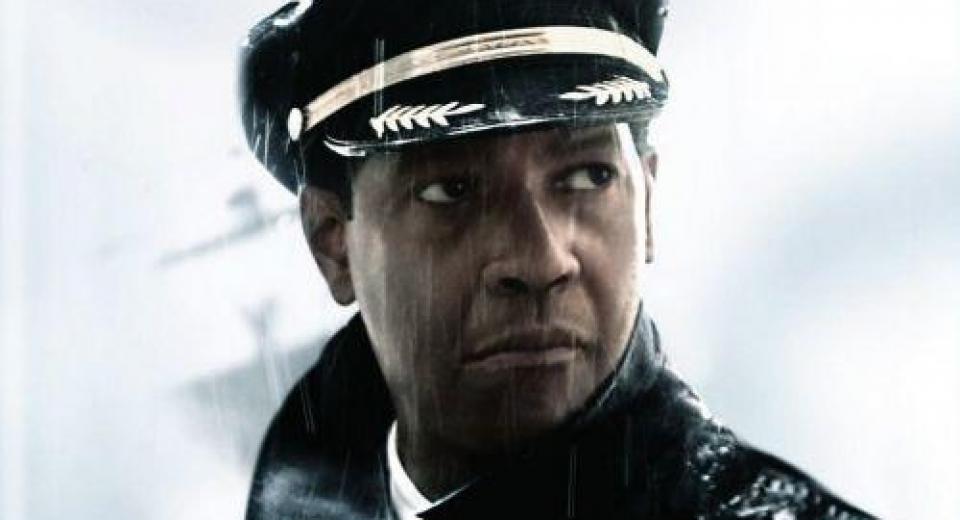 Delivering us a true moral quandary, Flight is a masterful character study, exposing the dirty, corrupt core of a high-functioning alcoholic who, whilst being regarded as a hero by the whole world, is still a tragically lost soul desperately searching for some kind of redemption; some kind of salvation - but eternally looking for it in the wrong place: the bottom of a bottle.

It provides Denzel Washington with one of his meatiest, most complex roles, and Washington runs with it, in turn delivering one of his greatest performances: portraying an undeniably and somewhat unforgivably flawed character in such a way that we actually feel a deep sympathy for him from start to finish. It’s a master class in acting and whilst Daniel Day-Lewis may be the expectant winner of this year's Best Actor Oscar, it's Washington who truly deserves the Award.

“I drink because I CHOOSE to.”

High-functioning alcoholics are an interesting breed. They are capable of maintaining their outside lives - most notably jobs - whilst drinking heavy volumes of alcohol. Most have either succeeded or over-achieved throughout their lifetimes and, because of this, they do not generally view themselves as alcoholics. They think that they can cope with their lives the way they are. And, to a certain extent, society tends to forgive them their addiction too, for the same reasons.

They’re the kind of people who get drunk before going out to a party; who can’t stop drinking once they start; who happily drink-drive with seeming impunity – never getting caught because they seldom display the tell-tale traits of a drunk-driver.

I’m sure everybody at one point in their life has known somebody like this, whether or not they were aware of it at the time. You know: the person who appears to be earning more than everybody else you know put together, functioning on next to no sleep and seldom capable of switching off without the assistance of alcohol; the person who everybody (but their partner) loves at a party, but who nobody can get near; the person who has a subtle Jekyll & Hyde personality, capably of spewing the most hurtful venom whilst under the influence, though never acknowledging that change when sober.

“No one could have landed the plane like I did. NO ONE.”

Flight examines one such person in great detail: Captain William “Whip” Whitaker, a veteran airline pilot who goes to work one morning on next to no sleep, a large amount of alcohol, and a cocaine chaser to keep him alert. When his aircraft inexplicably loses altitude and starts plummeting into a dive, the passengers go into a screaming frenzy and the crew start to panic, with only Whitaker remaining calm and in control. Saving the majority of the souls on board, he soon finds himself proclaimed a hero, but the crash investigators are more suspicious. After they discover that his blood alcohol level was several times the legal limit, Whitaker finds himself facing drink, drugs and manslaughter charges.

During his hospital convalescence he meets recovering heroin addict Nicole, who recently lost her flat, and who Whitaker invites to stay with him at his late father’s farm. Initially both are seemingly committed to staying clean, but whilst Nicole manages to remain strong, it’s not long before Whitaker is back on the booze, becoming increasingly self-destructive despite the fact that everybody around him is trying to help. Will anything get through to him?

Flight is a magnificent character study, perfectly spliced to the back-end of one of the most stunning air-crashes you will likely have ever seen committed to film. Director Robert Zemekis – who is probably best known for his Back to the Future trilogy, as well as Forrest Gump – hasn’t directed a live-action feature in over 12 years and yet he returns to it effortlessly, kick-starting his latest feature in a way not wholly unlike his last non-animated film, Cast Away, back in 2000: with a spectacular plane crash. Of course after this action-premise, again, as with Cast Away, the rest of the feature becomes utterly and completely devoted to character development and drama. And Zemekis nails it.

“You're a hero, man! You will never pay for a drink for as long as you live.”

This quote could, ironically, be used as something of a subtitle for the entire movie: it observes a character ostensibly heralded by all – both arguably before, and certainly after his unquestionably heroic actions – who has never, and indeed may never, pay the full price for his drinking habits. That’s what functioning alcoholics do: they function, despite their alcoholism, making it that much harder for them to be held accountable for their behaviour, let alone hold themselves accountable for it.

What’s so great about Flight is that it paints this portrait honestly, and without frills and Hollywood gloss, relying instead on excellent character construction (and de-construction) and powerhouse performances to captivate. And captivate it does. Whilst the action may be over within the first half-hour, the tension remains prevalent throughout; heightened to an often unbearable level as you watch this anti-hero circle the drain, heading towards rock bottom, all the while seemingly incapable of pulling himself out of his own tailspin.

Indeed as nice as it is to have Zemekis back doing weighty drama – in some respects you could regard this as his first true foray into this arena, as this is his first mainstream R-rated (here, 15-Certificate) movie – even his reassuringly skilful efforts are overshadowed by the work of his leading actor: Denzel Washington.

“The FAA and the NTSB took 10 pilots, placed them in simulators, recreated the events that led to this plane falling out of the sky. Do you know how many of them were able to safely land the planes? Not one. Every pilot crashed the aircraft, killed everybody on board. You were the only one who could do it!”

One of the most reliable leading actors currently working in Hollywood, I’d watch pretty-much anything with him in it, no questions asked. From the revenge actioner Man on Fire to the unusual post-apocalyptic sci-fi actioner Book of Eli; from the spy thriller Safe House to the stylish remake of Taking of Pelham 1, 2, 3 – and that doesn’t even touch on his pre-2000 work, which includes everything from Crimson Tide to The Hurricane; Fallen to Devil in a Blue Dress – Washington is reason alone to check out a movie, and normally ends up being the best thing about the projects he is involved in.

Here he offers us something else though: truly tapping into an intricate and multi-layered characterisation and delivering a portrayal rich in subtle nuances and eccentricities; utterly convincing as a high-functioning alcoholic. From his ever-so-slightly slurred speech and physical impairment to his cocaine-fuelled bravado; from his tired, quick-tempered retorts to his barely-coherent end-of-the-night behaviour, Washington puts his all into making this as realistic a portrayal as you could ever hope to see. Above it all, though, he somehow manages to make an almost completely irredeemable character into the undeniable (anti-)hero of the piece; finding sympathy in the unlikeliest of places, and rendering the alcoholic Whitaker as a lost soul who you feel for at every turn; and whose behaviour compels and captivates you throughout. It’s a complex portrait of a tragic character; it’s Washington at the top of his game.

After unfairly losing out on an Oscar for his portrayal of Malcolm X, he eventually won Best Actor for his powerhouse work in Training Day, but his work in Flight may well go down in his film history as being even more impressive. It will be interesting to see whether the Academy agrees...

Supporting him we get numerous impressive players. Don Cheadle (another reliably marvellous actor, who last worked with Washington on Devil in a Blue Dress and since went on to impress in everything from Crash to Out of Sight; Brooklyn’s Finest to The Guard) is simply perfect as the sharp lawyer who is enlisted to help get Whitaker off. It’s a wonderfully understated performance, both playing into the stereotypically slimy lawyer camp, whilst also revealing a man who actually believes in his client because he can (reluctantly) see that the man’s heroic actions largely outweigh his reprehensible behaviour.

Brit actress Kelly Reilly also impresses as recovering heroin addict Nicole, whose happenstance meeting with Whitaker sparks off a split-path of redemption for her, but may not be enough to pull him out of his dive. Reilly was impressive in the unpleasantly harrowing hoodie-horror Eden Lake, and utterly wasted in the Sherlock Holmes movies, but she finally gets some meat here with Flight, and she totally nails it. Unconventionally beautiful – even when looking like a total wreck – Reilly’s tragic anti-heroine is the flip-side to Washington’s high-functioning alcoholic: she cannot sustain her addiction – she knows that it will kill her and that she simply has to stop.

There are also a few glorified extended cameos for the likes of Melissa Leo (The Fighter, Red State), Bruce Greenwood (Star Trek, Deja Vu), and Iron Man 3’s James Badge Dale (possibly providing his best performance here as a strangely philosophical near-death cancer patient), but it’s John Goodman (The Big Lebowski, Argo) who is on utterly scene-stealing form as Whitaker’s larger-than-life drug-dealer friend, Harling Mays. Reuniting with Washington after their work together on 1998’s Fallen, Goodman proves that he’s still one of the greatest supporting actors, using just two scenes at the beginning and ending of the movie to make such an indelible impression.

Still, it’s Washington’s baby through and through. Despite the adept direction of Zemekis; and solid support from his regular collaborators – cinematographer Don Burgess and composer Alan Silvestri (whose choice of sporadic music tracks wonderfully enhances the intoxicating style of the piece); despite the Oscar-tipped screenplay by John Gatins and the impressive supporting contributions from all of those aforementioned supporting players (and more), it’s Washington who shines above all else, and whose central performance remains the biggest reason to see this movie. Of course he’s not the only reason to see this movie; but he is the reason why, after such a spectacular action opening, you stay utterly gripped for the remaining two hour duration.

Indeed the moral quagmire generated by this story is so complex that you may well find yourself torn as to how you would have liked the end to play out: should Whitaker be punished or praised? All the great moral quandaries have this effect: an open-ended debate which will leave you pondering long after the credits roll, and whilst Zemekis doesn’t quite deliver utter satisfaction with his own answers, perhaps there is no clear-cut answer with such a tragic central character. Perhaps that’s the point.

It may not have the world-changing backdrop of Zero Dark Thirty, or the stylistic flourish of Django, but Flight still provides an undeniably compelling character study and possibly one of the greatest performances of 2012. It’s a must-see watch for that alone.
"This thing is so heavy it’s killed me."

Delivering us a true moral quandary, Flight is a masterful character study, exposing the corrupt core of a high-functioning alcoholic who, whilst regarded as a hero, is still a tragically lost soul searching for some kind of redemption, but always looking for it in the wrong place: the bottom of a bottle. Providing Denzel Washington with one of his most complex roles - portraying an almost unforgivably flawed character in an undeniably sympathetic way - we, in turn, get one of his finest performances. It's reason alone to see this impressive drama.