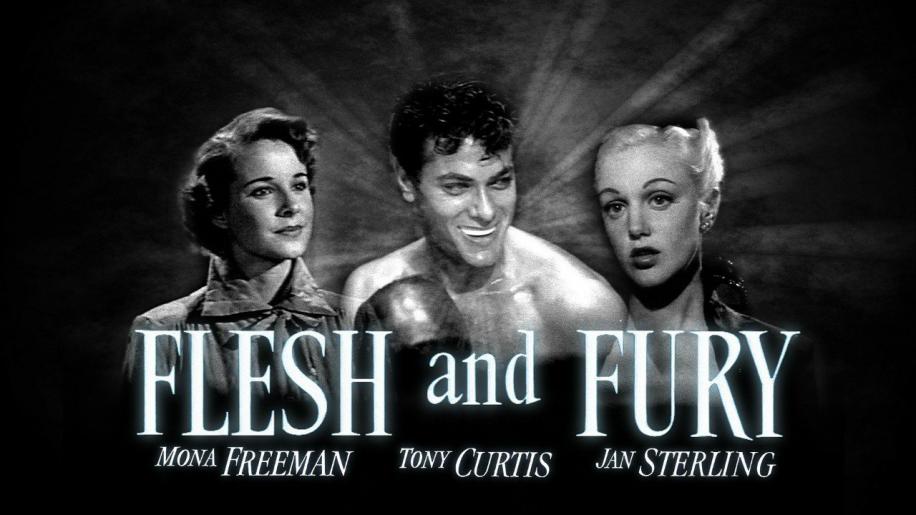 Entering the ring with its original 1.37:1 aspect ratio intact, Flesh And Fury, I'm sorry to say, doesn't even survive the first round unscathed. Mired by edge enhancement - some scenes have terrible ghosting haloes - and dampened by a silvery contrast that washes everything into a haze of milky grey, the film often looks like a lousy, third-grade NTSC transfer. Digital noise reduction has stripped away the original grain making the image light, bland and texture-less. Black levels aren't all that good, although I have seen much worse. There is a “blockiness” to them at times and their overall appearance is smoky, rather than inky.

The image does perk up a bit whenever we are away from the ring - Ann's house, say, the cliff-top drive, or when Paul goes for that dangerous walk-about in the city streets - but once we are sitting back down with the other spectators, or flies on the wall in the changing room, that waxy glower returns. The possible restoration that this film had undergone has removed its filmic sheen and reduced it to little more than an overly brightened TV movie. Detail is hit and miss throughout but, being charitable, there is still much on display during crowd scenes and close-ups. But, the thing is, if you are a fan of Tony Curtis or of vintage pot-boilers in general, it will be easy to overlook the transfer's shortcomings and just enjoy the movie's first ever home video release in the UK. Well, things are certainly a different story with the audio transfer of the film's original mono track.

With dialogue that is crisp and clear at virtually all times and a score that sounds clean and warm, without ever coming across as over-stretched, the film has a vintage vitality that is quite pleasing. The clever thing about Flesh And Fury is the care with which Pevney concocted his sound design. Paying unique attention to the vibrations and the sounds that Paul experiences and, later on, actually hears, his film makes primitive, but intriguing, attempts to subdue, minimise and drown-out voices and effects and then, of course, do the opposite, by bringing them all back again. Little tricks like echoing and reverberating noises to help us understand how Paul perceives the world around him are not lost within the mono mix. The bustle of busy streets and car horns, the restless hubbub of the party that invades Paul with sensory overload and the shouts, cries and curses of the spectators are all elements that the track manages to manipulate successfully within its limited confines. The “ding” of the bell is sharp and just listen to train-track rattle of the speed-ball when Paul, who can now hear through one ear, rips into it. You can even hear some of the reverb of the meaty impacts that Paul takes to the noggin - the mix simulating the way that he experiences the blows.

Now, before we get carried away, please remember that this track in no way compares to more modern mixes - it is just refreshing to hear an old sound design that has had some thought put into it that still translates well today. Some detractions still have to be expected, though. The age of the film is revealed with background hiss, which is low and un-intrusive for the most part, and pops and crackles which, during one scene in particular, are very noticeable indeed.

Ultimately, I was more impressed with this mono track than I was by the accompanying image. Sadly there are no extra features with this release. Eureka does it again. They bring out another neglected gem, dust it off and send it trotting out into the world with a new lease of life. Tony Curtis is outstanding in one of his earliest leading roles and Mona Freeman totally belies that initial “nicey” image and comes across as immensely sexy, which has got to be saying something when you consider that she's cast opposite Jan Sterling's sultry, shallow super-vamp. The story is a proto-Rocky, with fight scenes that are just as exciting, and the tricks that director Pevney employs are really quite innovative and striking. Moralistic, heartfelt and somewhat clichéd, it may be, but Flesh And Fury is a fabulously structured and surprisingly streamlined drama that weighs-in and certainly goes the distance.

The AV quality for this SD disc is a mixed-bag, though. The sound, despite the odd snap, crackle and pop is actually very good, but the image leaves a fair bit to be desired. With no extras in its corner, the film still comes out fighting and, in my opinion, scores a knock-out.