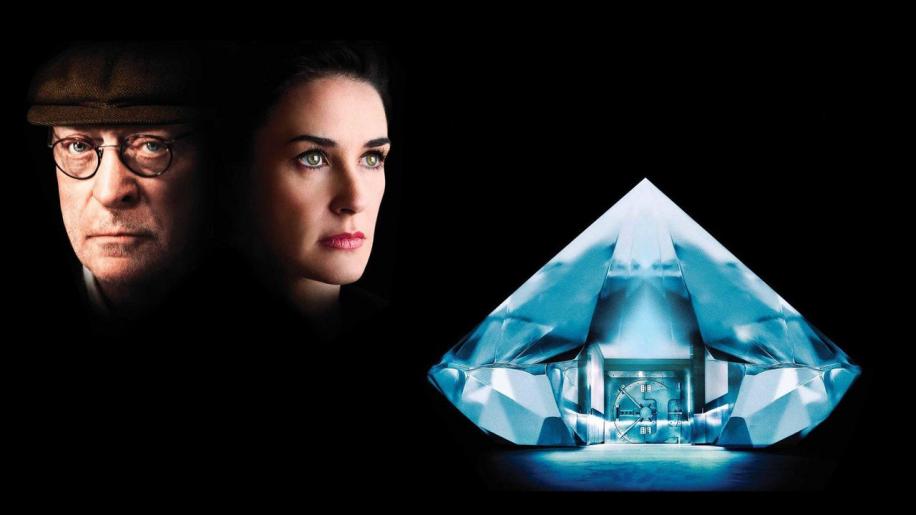 Flawless is set in 1960's London and there's a nice feel to this film right from the start. This is quite refreshing really. You get an upfront sense of proportion and the boundaries of where this film is going to go. It doesn't try to offer any illusions so I don't think I'm giving away the story when I say it's basically about a diamond heist.

Surely such a forward approach renders a movie like this as too predictable? No, not so. What you have here is a pretty well made movie that doesn't rely upon a roller coaster ride of big twists or a blatantly obvious ending. Sure, whilst some other recent offerings have injected comedy into the mix, this one cuts out the capers for a storyline that works solely off the premise that less is more.... or shall I say Moore....

Demi Moore plays Ms. Lara Quinn who's a middle management employee of the London Diamond Corporation. The film actually starts in a more modern day context with her being interviewed by young reporter in a London café . Lara's quite an old lady by now and the young upstart is doing a column piece about career women from the 1960's. Expecting a rather routine interview it turns out to be anything but and so unfolds a most interesting story.

Ms. Quinn is a 40 something career minded woman working in a very male dominated industry. She's an extremely loyal and hard working employee but no doubt the glass ceiling is preventing her from progressing any further. Thankfully the film isn't drawn into making prolonged liberation noises but it does enough to make you appreciate the difficult barriers that existed at the time.

She learns to accept the limits of her personal ambitions and the movie catches these reticent moments quite beautifully. The ever lengthening draws upon her oh so chic cigarettes paint a telling picture. Mmmmmm a rather sassy middle aged Demi Moore looking rather reflective? Subtlety is the key to appreciation here.

In fact it's the understated tone of the whole movie that helps it work and punch above its station. There are of course some holes in the storyline but it's all rather forgivable because it tends to hang.

As I mentioned earlier there are no comedy capers at play here but there is of course the part played by Michael Caine. He plays an ageing caretaker called Mr Hobbs who's worked his whole life at 'London Diamond'. Now on the verge of retirement and given that his pension was never going to be up to much he's planned for a far nicer resting period. What better than a man from behind the scenes to couple up with someone who knows the business from within?

He maybe in his seventies but there's no denying it, Caine still has class. He's by far the heavyweight of the two leads although to her credit Demi Moore tries to keep up as best she can. She has some obvious shortcomings, particularly her grasp of the English accent but she does a little better than I was anticipating.

Seizing upon her susceptibility Hobbs preys upon Lara to get her on board with his plan. As unlikely as the pairing sounds it kind of works. She's a reluctant party at first but the transformation of a strait-laced employee into an accomplice is soon complete. The Emperor may not have swayed Luke to the dark side but Michael Caine shows how it's done as he coaxes this moth gently to the flame.

There is of course a twist or two chucked into the mix. Robbing one of the world's largest diamond depositaries is after all not that easily done. The film intertwines some mixed messages about South Africa and blood diamonds to stir your conscious along the way but thankfully it never veers too far off to muddy the story. This reversion back to core helps keeps the storyline succinct.

No doubt there's some sweaty palm moments involved. You'll also enjoy some of the finer aspects as well as the subtle vagaries of boardroom politics and the consequences of influence. Joss Ackland plays the rather grumpy and pompous CEO of London Diamond with growling perfection.

Lambert Wilson also stars in the movie and plays the role of Finch. He's a fraud investigator who's brought in to unravel the sequence of events and fathom it all out. Frankly, if word ever got out of what has happened then the whole diamond industry is brought to it's knees. That of course is not allowed to happen. He plays the hush, hush super smooth sleuth to perfection.

Ever since Lambert played 'The Merovingian' in the Matrix movies this guy has really found his niche; I just love this guy. His face belies a mind that is whirring like a Swiss timepiece; a very unnerving look about him at all times.

I actually quite liked this movie and it's one of those that's been overlooked in a crowded release schedule. It's not the greatest but to be fair I think it's undeserving of serious negative criticism really.

Definitely worth seeing and has more entertainment value than merely a rental. At a good price perhaps even worth buying?