Flags of Our Fathers Movie Review 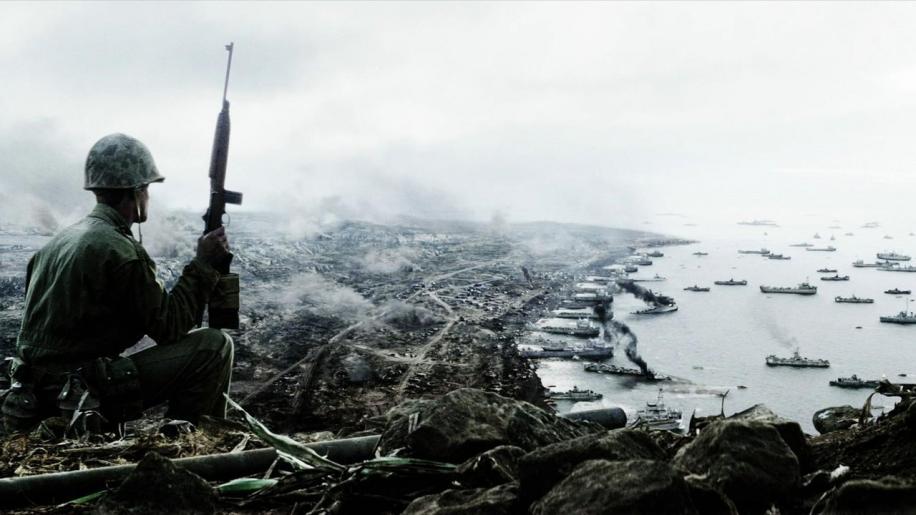 In the 65 years since the end of the Second World War, its portrayal in movies has gone through a number of transitions. Immediately after the War and for some 25 plus years it was common to find films about valour and courage, secret missions, spies but all with a common goal, to try to heal, or at least make sense of, a grieving world nation. In fact it took another war entirely to send the war film genre into another direction. It is even possible to pinpoint the last ‘great’ war film, before political agendas and messages were to be written in. 1968 and Where Eagles Dare, starring Richard Burton and Clint Eastwood, released just before Vietnam War, still remains a pinnacle of entertainment and film making. Coincidentally, it is Eastwood that brings us tonight's feature, Flags of Our Fathers, a telling of the American taking of Iwo Jima island; more specifically the story of the hugely famous image taken when the American flag was hoisted atop Mount Suribachi and what happens to the soldiers that raised it. Eastwood teams up with Spielberg to bring us a war film that works on several different levels and all of them outstanding.

The film is told in three separate though interweaving parts, the first is that of the son of one of the flag-raisers, James Bradley, author of the book upon which the film is based, interviewing his fathers peers and their families in an effort to discover why his father never spoke of the war. This part of the film is handled well and is a continuous thread throughout the film drawing the audience back to the present, reminding them it is a current ‘event’. It is the least looked-at of the three stories in terms of screen time, but as a lead in and out of the film there is a sense of symmetry to the proceedings and as Bradley discovers more about the events, we, through his eyes, do also. The revelation of the flag-raising comes as a shock to both him and us leaving us in no doubt as to the actions and consequences of the soldiers. There is never an amount of over-sentimentality and the material is treated with respect.

The second story is the American taking of the island, this is the most action-packed of the film and the parts where Spielberg’s influence is most felt. There are elements of the beach landings from Saving Private Ryan (1998) here, up close and personal filming, hand held’s being the cameras of choice, following the carnage in what was one of the bloodiest pitch battles during the whole of the war and certainly for the Americans. It is during these scenes that we are introduced to the main cast of the film and specifically the platoon of soldiers that were to raise the flag made so famous in that photograph. We get to experience the war from their perspective, not heroes, not for ‘king and country’, but for their friends and comrades in arms. Through their eyes we see the mammoth task ahead of them, witness the death and destruction at first hand, cower at the insanity of the decision-makers, such as failing to rescue a soldier that fell overboard because the timetable has to be kept or failing to stop friendly fire and causing nearly as much death as the ‘enemy’ and rejoice at their few moments of triumph. The landing scenes contain the most CGI of the film, warships, landing craft etc, and when seen from the mountain top it really is a spectacle to behold and gives some sense of the scale of the attack needed to take the island. It also talks purely from the American perspective, the Japanese are faceless enemies, and sometimes just the guns are seen wreaking their havoc. There is an element of bias here because this film is released in tandem with Letters from Iwo Jima which tells the same story but from the Japanese perspective. It is violent and bloody and does not pull away from the shocking truth of the horror of war; there is no glamorisation but neither are there lingering shots to promote the mess, rather it is near factual filming meant to stir and force a reaction and on that level it surely works.

The final and largest portion of the film is dedicated to what happened to the three surviving members of the six soldiers that raised the flag. The soldiers, including the author’s father, where shipped back to the States where the photograph of them raising the flag had become a symbol of hope against the oppression of war. They were given the title of War Heroes and used unceremoniously by the government as propaganda machines to sell war bonds that enabled America to stay in the War. Of the three solders, John "Doc" Bradley, Rene Gagnon and Ira Hayes it was Gagnon alone that embraced the celebrity thrust upon them, Bradley was content to ride along and do his duty, whereas Hayes, an American Indian, was taking it all very badly. The film charts their relationships with each other, their commanding officers over the course of the Bond Tour and a government saddled with crippling debt. It was very hard for them all, but particularly for Hayes who felt he never deserved to be there, and when we find out exactly why at the end of the film his behaviour is totally understandable. However, he is treated extremely badly, due to racism mainly, and his ending is a sad reminder of the frailty of life. The government is unscrupulous in their exploitation of the three soldiers; this comes to a head at the Soldier of Fortune memorial stadium when they were asked to replant a flag atop a fake mountain. None were happy with this particular element and all relived some horror as they scaled it. This is where the film really shines, Eastwood captures the feeling of the times without the need to preach. It is this skilful handling of the material, the complexities of the relationships, not only between the three main soldiers, but also their platoon mates and the government using them, which brings out the heart of the film. It is weighted very heavily in favour of this story leading many to question Eastwood’s motives, be they anti-war or even anti-American. Neither are true, like the veteran filmmaker he is, he presents the story, warts an all, leaving final judgement up to the audience. As such, there are plenty of judgments to be made, some good, some bad, but overall, the various award nominations and wins speak volumes.

Ultimately, Eastwood has crafted a story about human condition and discovery which just happens to contain war elements, plenty of war elements. It really ought to be seen in conjunction with its sister movie Letters from Iwo Jima to gain the full impact, but as a stand alone film there is much to praise. The film is free from gimmicks or schmaltz, it is an honest endeavour and, as a historically correct document, one that may very well prove to be one of the best war films ever made.