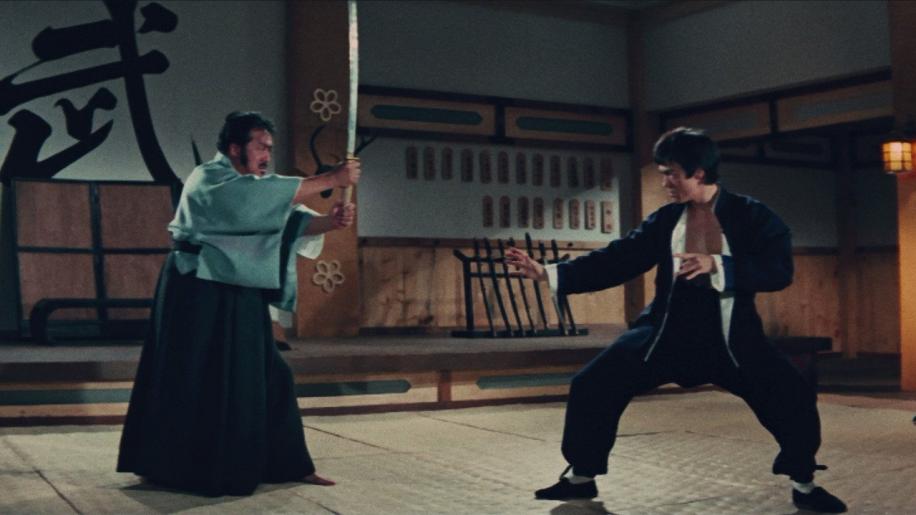 Presented in an Anamorphic 2.35:1 print, and blessed with a brand new hi-definition transfer this really does look the business. Considering its age and status as a low-budget production, the quality and sharpness of the print is amazing to behold. There is print damage of course, but this is limited to the casual wave of minute specks which are only ever really visible on dark backgrounds and never become a serious hindrance. There is no real evidence of any kind of digital compression artefacts or any really major instances of halo's or edge enhancement that detract from the movie. The only concern that can be voiced is that the colours seem to suffer from an unnaturally high contrast, which gives the film more of a 'western' look about it. This isn't particularly a noticeable or problematic issue due to the consistence and quality of the restoration, but it is debateable whether this picture offers the same kind of colour accuracy as the Fortune Star R3 release. As for the picture quality itself, obviously it isn't going to be reference sharp given its age, but this is still a sterling job and the movie looks wonderful. There are very slight dropouts occasionally and evidence of the odd millisecond of missing frames, but these are only minor concerns. All in all a great effort.

Although presented with two 5.1 tracks, the sound here certainly isn't too hot. It would be harsh to come down too hard on the audio here, there's certainly going to be a limit with what you can achieve with a crusty old original mono source, but the tracks here just don't really convey any convincing sensation of full surround. The rears are pretty much underused for the entire film, only really coming into play to mirror the fronts or to add a touch of depth to the proceedings, and the LFE channel is rarely troubled into anything meaningful. Sound on a whole is pretty ropey and indistinct, lacking any real impressive clarity or distinction, with quite mediocre separation and lucidity, especially where dialogue is concerned. Another bone of contention is that the two 5.1 mixes offered here are both dubs, either the English dub or the Cantonese one. The film's original Mandarin language track is represented here, but only in the form of a basic 2.0 mono track which sounds pretty awful. I know questionable dubbing is part of the experience, but it's disappointing that in order to watch the film in its original language you have to sacrifice even more audio quality. After playing about I found the most satisfying (but by no means completely satisfactory) way of watching was probably the Cantonese 5.1, but it's all personal preference I suppose.

Fist of Fury arrives with a remarkably generous selection of supplemental material spread across its two discs. The main focus on disc one is an audio commentary from Hong Kong cinema expert Bey Logan. Such is the sheer volume and regularity of Logan's involvement in Asian DVD releases, it's easy to imagine him handcuffed to a radiator in some dingy cellar whilst some unscrupulous suited types force-feed him a steady diet of Eastern cinema Clockwork Orange-style (much the same I suspect, as was imposed on Craig Charles when he managed to perform commentating duties on approximately 300,000 episodes of Takeshi's Castle). Logan's commentaries show a true love and affinity for all things Asian, and his tracks arguably contain more information per minute than any other I've ever sat through. This can be both a blessing and a curse. For those with a strong love and interest of these marginalised works Logan's knowledge is a truly phenomenal goldmine. For those tuning in more out of casual curiosity the sheer breadth, volume and intensity of his musings may be a tad daunting to attempt to digest. The man barely pauses for breath while analysing and commentating on the film, which makes this an indispensable guide for those inclined, albeit one that may take a few sittings to work through. Rounding off disc one is a reasonably detailed text biography charting his interesting career moves through the world of Asian cinema. On to disc two, which contains an absolute wealth of supplementary gems for the Bruce Lee fan. The disc is split into three menu's 'Reflections on the Master', 'Fist of Fury Remembered' and finally 'Promotional Archive'. 'Reflections on the Master' focuses itself upon the life and career of Bruce Lee, and is made up of four separate interviews with close confidants and acquaintances of Lee, who offer their own reflections and opinions on the man. First up is 'A Fist Amongst Equals' which is a mammoth (36:58) interview with martial arts instructor Sifu Dan Inosato. Inosato discuses Lee's life and work in tremendous detail, providing an interesting and detailed perspective on the pair's relationship. Following this is a briefer (10:08), but equally engaging interview with Lee's personal photographer Linda Palmer entitled 'Tracking the Dragon', where Palmer shares some great photography of Lee and explains the importance and influence of his iconic image. Next up is 'Legacy of a Master' (20:30), an interview with director Jeff Imada which explores the significance and lasting influence of Lee upon HK cinema. Rounding off this section is 'Friend to the Stars' (7:38), which offers more personal recollections from one of Lee's confidante's Joe Torrenuva. The second section of extras, 'Fist of Fury Remembered' is more film-specific and comprises three interviews with those involved in the production of the movie. 'Master of Bushido' (12:25) offers Jun Katsumura's reflections on the making of the movie, 'The First Lady' (17:58) is a great little interview with leading actress Nora Miao, and lead villain Riki Hashimoto recounts his experiences of the film in 'Blade of Fury' (17:58). Finishing off this section is an interesting and diverting tour of some of the locations of the film, presented again by Bey Logan. Rounding off the extras is the 'Promotional Archive' section which comprises the original theatrical trailer, the UK promo trailer, a promo reel for the Platinum Edition release of the film, and the pick of the bunch 'Magic Lantern' which is a nicely done photo gallery of rare stills. There is no question this is a splendid and thorough selection of extra's designed specifically for this release, and the producers of this Platinum Edition should be commended for their efforts in sourcing such a wide ranging scope of interviewees in compiling these supplements. If one was to be picky, perhaps the extras are a touch one-dimensional. They are a bit interview-happy and the repetitive format of the presentation may prove overwhelming for all but the moist avid fan of HK cinema. It perhaps would have been nice to see a documentary or two to break up the sheer volume of single-person interviews we have here. That said, this shouldn't take away from the fact that we have a very nice and detailed selection here which should keep any fans engrossed for hours. A very good effort indeed.

An essential purchase for fans of Bruce Lee or the genre in general, the Hong Kong Legends series comes up trumps yet again with a superb release that combines impressive A/V statistics with an exhaustive selection of high-quality supplements. Highly recommended.