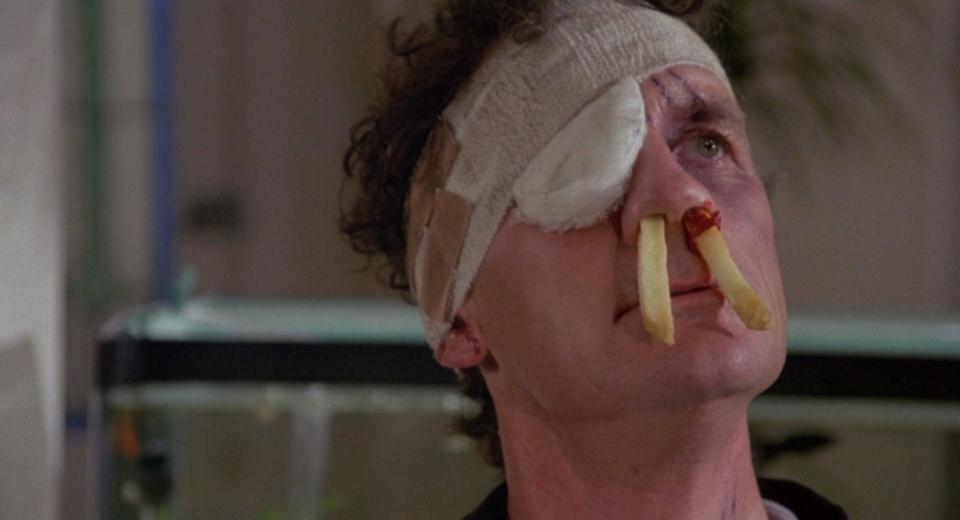 Every now and then we're reminded of something from the past that, at the time, we thoroughly enjoyed - perhaps even loved, and when the opportunity to revisit these things is presented to us, temptation is often too strong to withstand. But the fact remains that once in a while, it's better to remember movies as they were than to risk lessening their qualities as you remember them - perfect little nuggets of fondness nestled away in our memories. When A Fish Called Wanda hit our screens back in 1988, this was very much an instant favourite of mine, and I wasn't alone. It was received with pretty much universal acclaim. A comedy heist movie penned by the ever popular Monty Python legend, John Cleese, and come awards time it was honoured with several nominations and even won an Oscar. It's a classic british movie. It's also very much a product of the time, and time, so often hailed as the greatest healer of all, has not been so kind with this little gem from the vaults of my memory.

The story follows jewellery fiend Wanda (Jamie Lee Curtis) and her pseudo psychotic boyfriend, Otto (Kevin Kline). The couple are in London and are planning a diamond heist with George (Tom Georgeson) and his animal-loving stuttering side-kick, Ken (Michael Palin). Wanda and Otto pose as brother and sister which allows Wanda to use her sexy vixen ways to earn George's trust.

The heist goes to plan, and the group retreat to their hideouts. Unbeknownst to George, the mastermind behind the heist, Wanda and Otto have plans to steal the diamonds for themselves and frame George to take the fall. When the dastardly couple realise that George was less trusting than they thought and had been cunning enough to expect some form of treachery, hiding the Diamonds not where they had planned, but at a secret location, the couple set about trying to find out where they are, and carry out their plan to steal the diamonds for themselves.

Whilst George sits in prison awaiting trial, Wanda attempts to seduce George's barrister, Archie Leech (John Cleese). This is not difficult, as Archie is in a rut, and despite his very successful career, is like putty in her hands. Slowly, she begins to extrude facts about the case from Archie, hoping always to stumble across the details as to where George has hidden the Diamonds. Whilst Archie becomes increasingly besotted with Wanda, Otto becomes increasingly jealous. Obsessed with the idea that he is an intellectual, when in actual fact he's something of an idiot, Otto struggles to cope with maintaining the brother and sister act with Wanda.

Meanwhile, Ken (Michael Palin), Georges only trusted friend in the whole débâcle is faced with the daunting task of killing the only witness to the crime, an old lady with a number of tiny dogs. Ken is also charged with hiding the key to the safety deposit box where the diamonds lie, waiting for George to either collect them, or reduce any sentence passed down to him by disclosing their location.

What ensues is a comedy caper that culminates in a merging of all three narratives with hilarious consequences, likes of which would be suited to a “Carry On” movie, but with less toilet humour, funnier jokes and more of a budget – largely spent on the cast.

Ok, so it was, and still remains, a British comedy classic. That's never going to change, but the honest truth is that the best thing about A Fish Called Wanda is Kevin Kline. That's the nuts and bolts of this review.

Firstly, things have moved on a lot since 1988, and comedy has changed and matured. Audiences have come to expect more and more as the years have passed, but there remains a glimmer of nostalgia for audiences revisiting the movie will be able to call on sentimental attachment to reinforce the movie's value, but those watching for the first time may indeed struggle with the somewhat dated style of humour.

It's borderline slapstick - a marquee demonstration of convoluted twists and turns wrapped in the guise of physical situation comedy, reminiscent of Faulty Towers. It's not that it's bad comedy, quite the contrary really – it's very well written, and very well directed (though some of the camera work leaves a lot to be desired). Jamie Lee Curtis is solid as you would expect, and plays her part of the sexy american sex kitten brilliantly. Michael Palin demonstrates his ability to bring a sense of realism to his character, the rather unfortunate Ken, with his devastatingly frustrating stammer. In fact, one of the movies finest moments features a rekindling of that Monty Python calibre of comedy between Palin and Cleese when Archie (John Cleese) is desperately trying to be patient while Ken (Michael Palin) struggles to conjure an elusive key word in a sentence. Cringeworthy and downright infuriating comedy, and there's none better at it than these two stalwarts of British comedy.

Directed by British legend and good friend to John Cleese, Charles Crighton, it's on the whole a pretty good effort, especially considering that he celebrated his 78th birthday during filming of A Fish Called Wanda. Though not without its directorial gremlins, such as the overuse of the Dutch-Tilt during the robbery scene, and the somewhat clunky crane shots in the opening credits. Considering Crighton's background it's not surprising that it smacks of Television movie at times, however, there's a certain appeal that this brings to the movie, especially when we see the TV-like crane zoom in on Hollywood star Jamie Lee Curtis's profile as she leaves the jewellery shop in the opening scene I mentioned. Where this camera movement and shot framing would be expected in an episode of Dr. Who, it's entirely forgivable here given the subject.

Now, back to Kevin Kline. There's a reason he won an oscar for Best Supporting Actor for his role here, and I don't think that to this day I've seen a supporting role in a comedy movie played so brilliantly. He's incredible as the egotistical, neurotic and obsessive boyfriend, Otto. His performance outshines all his co-stars, though it's worth noting that there are no glaringly rubbish performances on display at all. He just brings something to the movie that even after all this time, holds a freshness; an almost black-comedy undercurrent, without which I feel the movie would have been half as good as it was - if that. I remember at the time thinking that it was a great movie, and it definitely warranted a couple of viewings, but after 24 years, Otto is pretty much the only thing in the movie that actually raised a laugh.

It's a delight to watch him build nuances into his character that are truly unique, and unquestionably improvised. From his maniacal glare through the glass of the front door having been ushered out by Wanda, to his uncontrollable angry outbursts that are genuinely amusing, lest we forget his incredibly short attention span, resulting in him having a consistent inability to focus on a conversation, remembering only the first thing and the last thing said to him - “What was the middle part, again?”.

Given the ability to go back in time and review the movie with fresh eyes and without 24 years of fresh comedy, this review might read slightly differently. It's a chortle-worthy comedy heist romp that perfectly manages to underline the differences between British and American humour, providing laughs for not just one but both sides of the pond. Sadly, as I mentioned, it suffers under the weight of its years. John Cleese's screenplay is laudable indeed, but it never quite manages to break away from his style of situational comedy. From clichés like hiding a girl behind the cupboard door from the wife who returns home early, to the physical comedy Cleese so excels at, demonstrated perfectly with his energetic fleeing from the apologetic Otto. A Fish Called Wanda is a prized jewel of British comedy and shall remain so for ever I'm sure, but after a long gap of 24 fruitful years of new comedy, it struggles to keep up, held up by the accolades bestowed upon it back in the late 80's.

Both a shame and a delight that the funniest thing about this classic British comedy today, is an American actor who thoroughly outshines the rest of the cast.