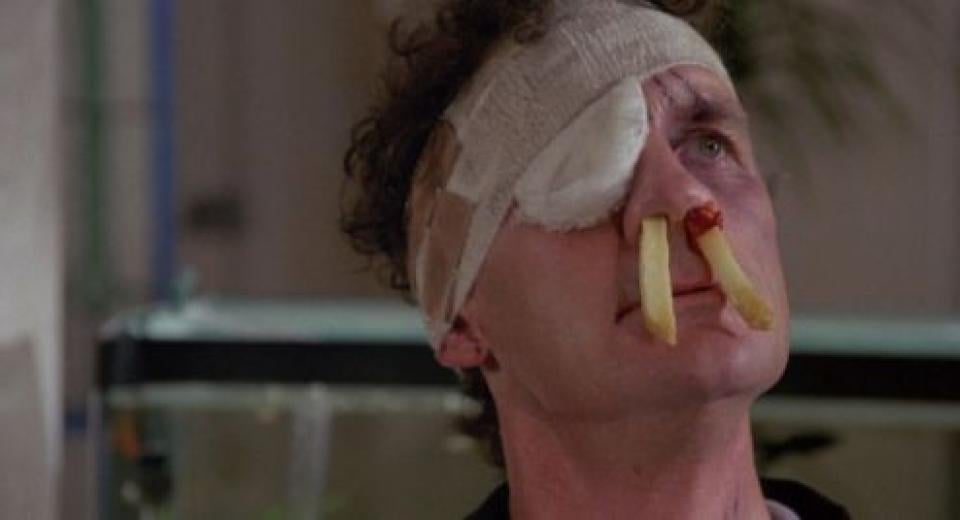 It's fair to say that the opening few moments of A Fish Called Wanda left me incredulous, and wondering whether there had been some terrible mistake and that I had received an up-scaled VHS transfer rather than the 1.85:1 aspect AVC encoded 1080p Blu-ray. Perhaps slightly over the top, but no word of a lie, my first impression was a kind of horror. So riddled was it with blemishes and dots and discrepancies that I genuinely paused the movie to take stock.
I won't wallow too long on this picture review, as it really is one of the worst transfers I've seen and I'm going to struggle to find many positives to talk about. Riddled with grain that is noticeable even at a generous viewing distance from both screens I tested on, I found this quite a distraction at first, and though after a time it did seem to intermittently restrain itself, occasionally allowing for a reasonably acceptable picture to shine, the scratches and general blemishes on the original print really doesn't make for a very good image basis.
Colour is faded and dull, and there's no fine detail to speak of. What little DNR treatment the encode has had is pretty minimal, and doesn't really do it many favours, bar the occassional moment where it's been slapped on like a harlet's make up leaving the actors with pink, glassy looking skin - certainly not preferred to the mess of noise the rest of the time.
It's flat and dreary looking pretty much throughout, and fails to do much besides disappoint, even for a film of it's age. Though things do very slightly improve once we get past the horrific opening shots, the improvement is marginal. Admittedly, this was never a pretty movie, and it was never a vibrant movie, nevertheless, I think to deliver such a poor video transfer is, for the most part, unforgivable. Again, the DTS-HD Master 5.1 track is a product of the time, and a product of the budget. On set sound was used for the majority of the dialogue, and despite his excellent performance, much of Kevin Kline's dialogue is quite “shouty”. This led to quite a few occasions where his lines distort, and this hasn't been addressed pre encode. Dialogue is otherwise thin in frequency range, occupying mostly the mid range, and is generally mixed quite loud. Not a major issue really, considering there's no real requirement for any explosive dynamic range, given the film's largely dialogue driven narrative. The few smatterings of gunfire we do get, mostly during one of Kevin Kline's rants and fits of anger, are extremely generic, over-used, mostly distorted smacks of “k-koww” gunfire.
As for the surrounds, barely used if at all, and LFE didn't get anything even close to a work out. Everything remains pretty flat and pinned to the frontal array. On the whole, despite being a relatively old movie, the audio presentation is particularly lack-lustre, and certainly doesn't deserve the DTS-HD Master 5.1 track it boasts. 
With a complete lack of a front-end on the Blu-ray, it can be a little confusing at first as to how to access this content. Bringing up the in-movie menu allows you to access the Extras tab. Scrolling right reveals that there is more than just the commentary from John Cleese, in fact, quite a welcome plethora of extras await. Skipping through these extras however, requires you to return to the movie before being able to select a different item. Peculiar layout, and not very intuitive. Content-wise, plenty here to get your teeth into.
Commentary from John Cleese - It's quite an informative listen really. Cleese discusses topics around making the movie that range from working with long time friend and director Charles Crichton, to working with Jamie Lee Curtis and Kevin Kline. Both of whom he clearly has great respect for. A healthy peppering of comedy anecdotes make this worth a watch.

Something Fishy Documentary – A 30 minute documentary with cast and crew interviews. Lots of discussion on how it was a small movie, and everyone was surprised at how successful it was. Also lots of anecdotes about the somewhat ageing Director Charles Crichton, all fondly delivered of course.

Deleted & Alternate Scenes: 30 minutes of deleted scenes, featuring an introduction in which John Cleese warns us that some of the scenes, being from tape, aren't as high quality as the other stuff that made it into the cinema release. Big words, but my goodness is he right! All scenes introduced by John Cleese.

A Message from John Cleese – 5 minutes of Cleese at his bumbling hilarious best, selling the movie beside a plate of chips. Classic.
Theatrical Trailer A classic British comedy that in its day brought joy to audiences worldwide with its brilliant python-esque situation comedy, constantly poking fun at the divide between British and American humour. At the ripe old age of 24, A Fish Called Wanda still hits notes of nostalgia with audiences familiar with the movie, though I suspect newer audiences may struggle slightly with how dated it's starting to look and feel. Kevin Kline shines with a brightness that sadly leaves the rest of the cast looking ever so slightly dreary, and the Faulty Towers style comedy caper scenarios somehow feel a little flat and tired with the weight of age on it's shoulders.
With, quite frankly, an appauling image, and sound that certainly could have done with a little tender love and care, the Blu-ray package is a perfect example of how not to bring a classic back into the fold with a new format, especially one labelled a Hi Def format. It's the epitome of laziness, with little to nothing having been done to bring what was already quite a poor quality print into the Hi Def era. Extras are plentiful, and definitely go some way to making this package sting a little less for having paid practically no attention to bringing the movie into the Hi-Def- 21st century. I would have liked to have seen much more care and attention being paid to treating the picture and breathing new life into it, when sadly it feels very much like a cut and run job.
Overall, the movie is worth a revisit indeed, but be warned, newcomers - you will not find much that warrants the Blu-ray format here. If you already own it, stick with the DVD.

This review is sponsored by