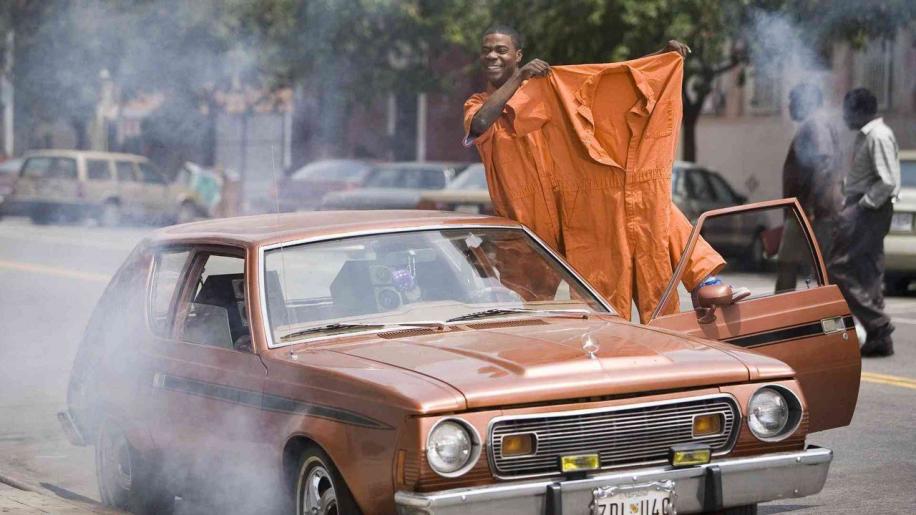 A couple of months ago, I reviewed the reg A US version of Sony Pictures First Sunday starring Ice Cube and Tracy Morgan. The UK version is released today and is identical in every way to the US release except for the addition of 23(!) subtitle tracks - I have listed each and every one for you in the specifications section of this review...meanwhile, here's what I had to say about the US version - my feelings towards the movie, picture and sound quality and the extras package are the same as so little time has passed since last viewing the disc...

It's like the last ten years of Ice Cubes' career as a movie star has passed by in a flash. It seems like only yesterday that he was in the brilliant Three Kings with George Clooney. In the ten years that has passed, Mr Clooney has produced the odd turkey (Batman and Robin anyone...?) but has, on the whole, turned out some mighty fine movie fare.

Mr Cube, on the other hand, left his memorable movies at the exit when you left the theatre after the aforementioned Kings...when the powers that be here at avforums reviews kindly requested that I take the Ice man's latest offering, it was with a Jeremy Irons enthused “Oh Goody...” that I took the news. After all, it can't have been that long ago that I sat through Are We Done Yet? for the sake of family peace...
In First Sunday, Ice plays Durell Jefferson. Along with his partner in crime LeeJohn Jackson (played by Tracy Morgan), he has been sentenced to 5000 hours community service for persistent offending.

Durrell, however has bigger problems of his own. His estranged wife is threatening to take his son away unless he can come up with the $17,300 she needs to pay her rent arrears and keep her apartment.

While the pair are carrying out their community service, they notice the shapely form of Tianna Mitchell (played by Malinda Williams) go into a nearby church. Thinking they are onto a good thing, they follow her in. Inside they discover that the church has been on a money making venture to improve the facilities there.

Going back later that night, the gruesome twosome attempt to steal the cash - but someone has beaten them to it and the safe is empty. That same evening, there is a meeting going on of the church committee and the choir - ready made hostages.

Over the coming hours, the boys try to find out who has beaten them to the loot - discovering in the process that the churches' Deacon isn't all he's made up to be. He wants to move the church to the suburbs, much to the disgust of the pastor and the committee members. The money is found by the cleaner and the Deacon's book cooking plan is foiled by those pesky robbers - who it seems, have found religion.
So it's pretty predictable stuff. But, it's not as bad as I first thought it was going to be. Ice Cube is never going to win an award for his acting - but he puts in a half decent performance as the down trodden hen pecked ex husband who blames everybody but himself for his problems. He sees crime as a quick fix to his long term troubles and director David E Talbot, whose short catalogue of previous films seem to have gone straight to video, doesn't help matters much by some muddy and confusing direction. The middle section of the film drags - which does nothing to keep your interest alive. I found that I no longer cared whether or not the two main characters were caught and locked up forever or not - and, if they were, the sooner the better!

If the film does have a saviour, it's Tracy Morgans' turn as LeeJohn. The guy is naturally funny and he produces the one or two chuckle out loud moments in the film, the pick of which involves a massage parlour and a well known Minnie Ripperton song!
The rest of the cast appears to be made up of black American stand up comedians from the comedy circuit there. Here in the United Kingdom, we get little coverage of the comedy scene in the US so most of the names will be unfamiliar. However, Chi McBride, who plays Pastor Williams is known by audiences worldwide for his many many TV roles, the latest being as Emerson Cod in Pushing Daisies.

Another one of the actors who caught my eye (quite literally) is Malinda Williams. I must say that this woman is drop dead gorgeous. If Hollywood roles were won on looks alone, this young lady has a very bright future in front of her...
All in all, First Sunday is a pretty run of the mill feel good buddy movie. What it lacks is any kind of direction. It fails to lift itself above the likes of films from the same genre, such as Stir Crazy, because it lacks that special touch that Gene Wilder or Richard Pryor could bring to a movie with one word or facial expression. Young Tracy Morgan may be a Pryor in the making, but this movie should be left well down the list when he presents his CV to future employers.

However, it does get its point across well and makes you feel all warm and fuzzy inside at the end. Stone Cold Ice Cube fans will love this - but for the rest of you, I can heartily recommend a rental. If you don't expect too much, you won't be disappointed.